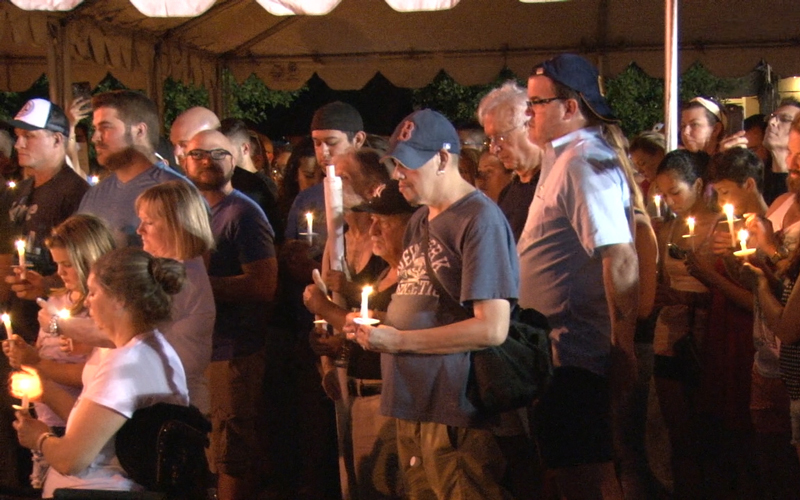 Crowds gathered for a vigil on Sunday after a mass shooting in Orlando, Florida. (Photo by Eddie Keller/Cronkite News)

PHOENIX – A Muslim woman in Phoenix says Ramadan promotes peace, contrary to the man who killed 49 people and injured 53 others at an Orlando gay nightclub. A Christian minister who was among hundreds who attended a vigil for the victims said interfaith conversations needed to continue. An owner of a LGBT clothing store said the tragedy shows more security measures should be taken to guard against those intolerant of gays.

A gunman who pledged allegiance to ISIS, identified as 29-year-old Omar Mateen, was killed by police after a three-hour standoff. It was the worst terrorist attack since Sept. 11, 2001, and the worst mass shooting in American history.

Manager of @kobaltbar talks to @cronkitenews about the events in #Orlando. Says action needs to be done on guns. pic.twitter.com/usZZFj7hka

Huda Shrourou, a Phoenix Muslim, said Ramadan, a holy month of intense fasting and prayer to bring Muslims closer to God, is about peace, not violence. Shrourou said the Orlando shooter was not adhering to Islamic values. `

“In the Quran it explicitly says if you kill one person, it’s as if you kill mankind. The fact that this happened in the midst of such a holy month should tell you something about this individual.”

Patrick Kelly, who runs the LGBT clothing store Off Chute Too and has worked with the Phoenix Police Department to address LGBT issues, says he, like many others across the country, is afraid of a copycat attack. Patrick Kelly stands behind the counter at LGBT clothing store Off Chute Too, which he owns. (Photo by David Marino Jr./Cronkite News)

“I was reassured by the Phoenix police department that they were going to do everything in their power to address the concerns and some of the fears that we might we have, both as a business and as residents.”

The Rev. James Pennington, of Phoenix First Congregational United Church of Christ, said the conversation among leaders and followers of diverse faiths needs to go beyond Sunday’s vigil. More than 750 people attended the vigil at Phoenix Pride LGBT Center, according to azcentral. “I don’t think anybody should believe that in a society like ours that there’s a way to fully prevent people from going out and committing lone wolf attacks,” said Rothenburg, co-director of the Center for the Future of War. ” It’s just simply not possible to prevent anybody who gets hold of a gun to shoot that gun at people.”

Rebecca Sanderson donated blood to a United Blood Services blood bank in Chandler, driven by the urge to help those injured in the Orlando’s shooting. A spokeswoman said phone lines were flooded with calls from people who wanted to help. Rebecca Sanderson said she was donating blood for the first time to help the victims of the Orlando shootings. (Photo by Jackie Balbuena/Cronkite News)

“Actually, this is my first time donating. I’ve thought about doing it for many years so this brought me in today.”

Dr. Sydney Vail, a Phoenix doctor who treated four victims of the Virginia Polytechnic Institute and State University, in which 32 people were killed, carries a trauma kit around his ankle, just in case.

Dr. Vail, who heads the trauma division at Maricopa Medical Center, said he believes Arizona is prepared to handle a major event like the one in Orlando.

“Phoenix has a lot of Level I trauma centers. So, God forbid something huge does happen, and I’m talking more than five or eight patients, we have enough resources here that we should be able to handle a huge mass casualty.”