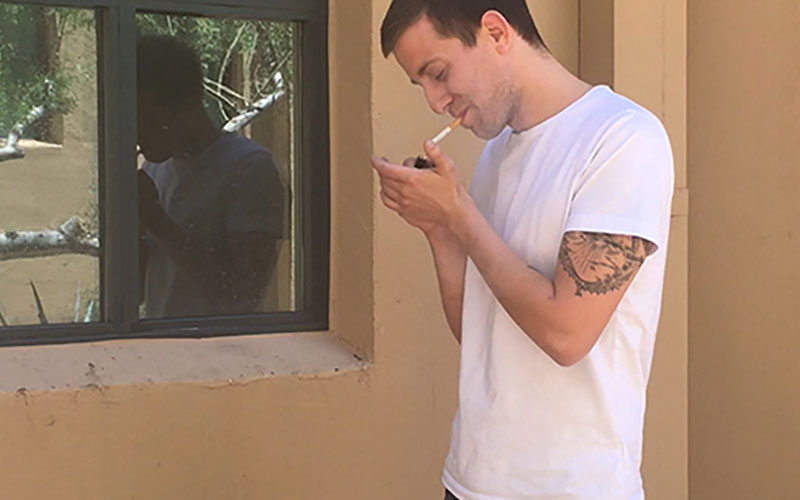 Michael Skarsten, despite being a smoker for nearly nine years, says he understands why some people may want to live in a smoke-free apartment. (Photo by Kelsey DeGideo/Cronkite News)

Take apartment manager Bryan Fasulo. He oversees 12 apartment complexes in the Phoenix metro area. Two of them are smoke free — no smoking inside an apartment, in the hallways, community rooms, or lobby. Yup. Nowhere with a ceiling.

Smoker Michael Skarsten is totally down with that.

“It’s a gross habit, really,” said Skarsten, 24, as he lit a Marlboro outside the Phoenix office where he works. “I don’t know many cigarette smokers who are super down with tobacco or smoking.”

Arizona Multihousing Association is encouraging its members to turn apartments into smoke-free areas. It offers incentives such as free advertising on its website, according to Fasulo.

There’s some science behind the trend. An apartment association encourages Arizona developers and managers to invest in smoke-free dwellings, citing a 2012 Maricopa County survey reporting that 70 percent of county residents prefer to live in a smoke-free environment.

“If one person is smoking it can completely permeate the entire corridor,” Fasulo said.
And cleaning up after a smoker isn’t cheap. He estimates it costs $3,500 to restore an apartment where a smoker once lived.