The 9th U.S. Circuit Court of Appeals reinstated the Arizona Students’ Association lawsuit against the Arizona Board of Regents, which accused the regents of cutting off funding to the student group in retaliation for its political activities. (Photo by Ken Lund via Creative Commons) 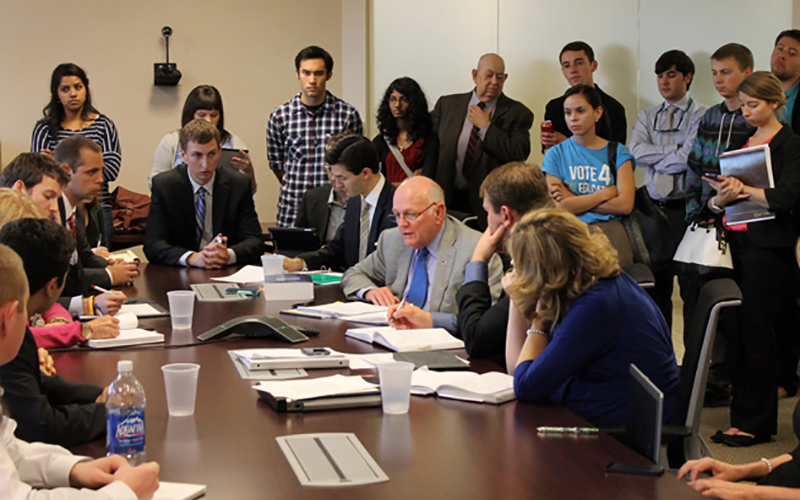 The Arizona Board of Regents, in this photo from November 2012, when the board was debating a plan to stop collecting a student fee that funded the Arizona Students’ Association – a move the students called retaliation for their political activity. (Photo by Kevin Fallon courtesy Downtown Devil)

WASHINGTON – A federal appeals court ruled Wednesday that the Arizona Students’ Association can pursue a claim that the Arizona Board of Regents cut off its funding in retaliation for the student group’s aggressive support of a school-funding initiative.

The ruling by a three-judge panel of the 9th U.S. Circuit Court of Appeals overturns a lower court that had dismissed the students’ case on the grounds that the regents, as an arm of the state, enjoy immunity from being sued for monetary damages.

The appellate court decision by Judge Richard Paez said that individual board members are not immune and that a state agency can be sued to prevent future violations of constitutional rights. Paez said the students “properly alleged a First Amendment retaliation claim” in their lawsuit.

Paez wrote that the “disparity in power” between the students and the board is “vast” and that students had argued that the regents “leveraged that power to punish the ASA for participating in core political speech and, further, to attempt to bankrupt the ASA to prevent it from exercising its free-speech rights in the future.

“It is highly likely the board’s alleged retaliation would chill and discourage a student or student organization of similar fortitude and conviction from exercising its free-speech rights,” the opinion said.

A spokeswoman for the regents would only say that the board would review Wednesday’s ruling with its legal counsel when it meets next week, and determine then what steps to take.

But an official with the student association said Wednesday that, after sitting in on arguments in the case, she was hoping for a decision that was “really powerful to our favor.”

Silencing student political speech is just what the association claims the regents were trying to do in late 2012 when they called a special meeting and voted to stop collecting the student fees that fund the association.

In the months leading up to that meeting, ASA had campaigned heavily for the passage of Proposition 204, which would have made permanent a temporary 1-cent increase in the sales tax, with the extra money dedicated to education, transportation and human services projects.

The students’ association helped draft the proposition, collected petition signatures and campaigned for the measure, using $120,000 of student fees for the Yes on Proposition 204 campaign. The measure ultimately failed by about a 2-1 margin.

Opponents to the proposition included then-Gov. Jan Brewer, who automatically held a seat on the board, and several regents who had criticized the association’s support of the measure.

Since 1998, the regents had collected a per-student fee on behalf of the association. But the regents voted in November 2012 to stop collecting the fee, then decided in spring 2013 to only collect fees from those students who voluntarily agreed to pay it. The Arizona Legislature subsequently prohibited the collection of student fees for any organization that is not part of the university system – which would include the association.

Stevens said the association has not received any money from the board since the dispute began, including money that was collected for spring semester 2013 and held.

The ASA sued, but a lower court threw out the suit, citing sovereign immunity. Even if the board was not immune, the district court said, its refusal to fund the association was not retaliation for free speech – it was just a refusal to facilitate that speech, which is permissible.

But the circuit court disagreed, saying that cutting off funding served to chill free speech by cutting off a valuable government benefit to the students.

Stephen Montoya, an attorney for the ASA, said the decision showed that the government cannot take away benefits from students based on their exercise of their First Amendment rights.

“Even if you voluntarily give something you are not obliged to give, you cannot take it away in retaliation of free speech,” said Montoya, who added that he was pleased with the decision.