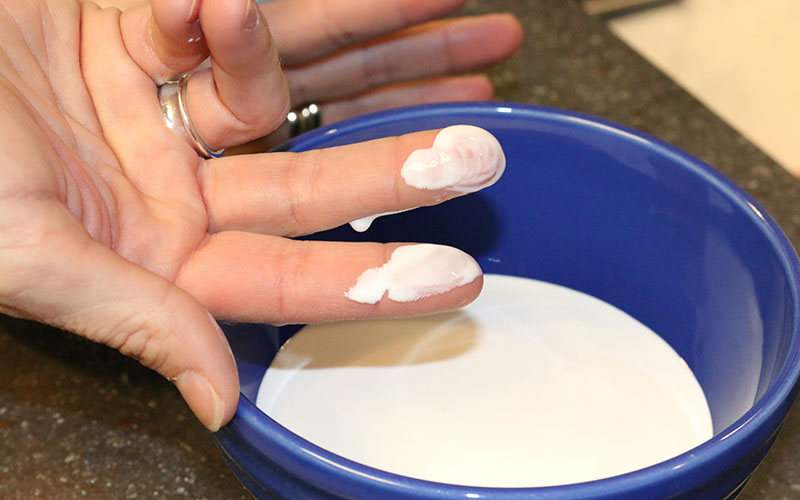 ‘Gorilla-Snot’ solution created by local Arizona company, Soilworks. This product was sprayed on hundreds of acres of land to prevent further dust from rising along parts of Interstate 10. (Photo by Alexa Salari/Cronkite News) 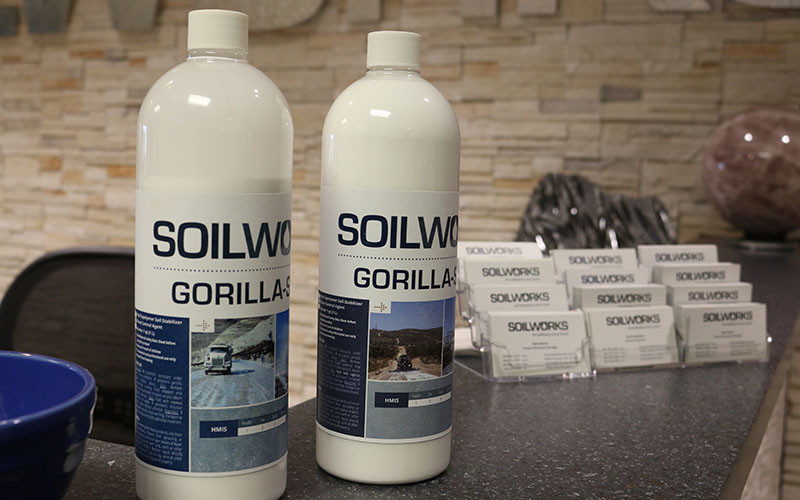 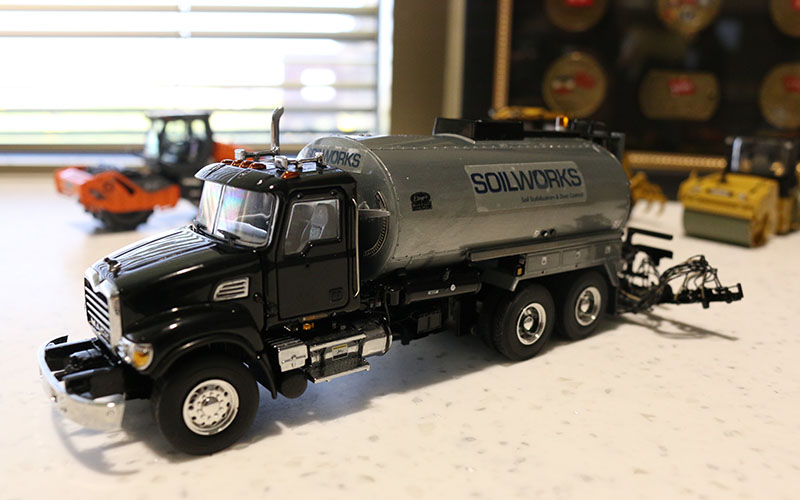 A mini-model of the trucks Soilworks uses to distribute and spray the ‘Gorilla-Snot’ solution. (Photo by Alexa Salari/Cronkite News)

SCOTTSDALE — Silly name. Serious solution. That’s what local Arizona company Soilworks calls its Gorilla-Snot fix to the blowing dust that resulted in a 62-mile stretch of Interstate 10 being closed multiple times during the past several weeks.

The southeastern portion of the I-10 has been reopened, according to the Arizona Department of Transportation.

“It should be almost an immediate remedy when it [Gorilla-Snot] dries out and makes that crust,” Franquist said. “And, according to the manufacturer, it can last up to six months if applied correctly,” he said.

Though it looks and smells like glue, Gorilla-Snot creates a 3-D-like cap over the dirt and prevents dust from rising, said Karol Clark, marketing manager at Soilworks.

This chemical stabilizer “will actually be a more long-term remedy,” Franquist said.

When Soilworks was looking to name the product, Clark said people thought it felt like snot and they believed it to be a strong, working solution. Gorillas are a strong animal, hence the name.

It will “UV biodegrade [in] six to 12 months depending upon the application rate, but it will eventually decompose and be OK,” she said.

Soilworks has finished spraying 45,000 gallons of Gorilla-Snot to treat the affected areas, Clark said. Water is added to the solution so workers can spray the chemical stabilizer onto the dirt from its trucks.

Approximately 320 acres of land were sprayed with water and treated with the solution this past Saturday, said Caroline Oppleman, an ADEQ spokeswoman. The department is paying an estimated $200,000 for that initial treatment.

Another 320 acres of land were scheduled to be treated by Tuesday through the landowner of the tilling farm reported to have caused the rise in blowing dust, Oppleman said. The landowner is working with an Arizona company called National Land Management, which is using an additional dust suppressant product to treat the affected area, she said. This second phase of treatment will cost approximately $200,000. The landowner and ADEQ will split these second-phase costs, Oppleman said.

ADEQ is “working with the landowner every step of the way” to not only get the dust under control, but to prevent future scenarios like this from happening, Oppleman said.

Gorilla-Snot is a sustainable vinyl copolymer that can be walked or driven on once sprayed, Clark said. She said independent studies have been conducted to ensure the safety of the product. The company lists a safety data sheet on the solution via its website.

Oppleman said they have recommended to the tilling farm reported to have caused the rise in blowing dust to plant more trees and vegetation around the acres of land to act as a barrier if more dust should arise.

“Ultimately when the trees become more mature and there’s some grass grown, that will take care of the issue moving forward in all likelihood,” Franquist said.

What caused the dust?

Franquist believes a landowner who operates a normal tilling farm for pistachio nut agricultural production was not carrying out the best practice for cultivating the soil.

“The soils down there [near southeast Arizona] are very prone to dust production and due to the very large amount of area that was tilled, that contributed to a lot of dust that ultimately closed the roads intermittently through the past couple weeks,” he said.

Tilling is a farming practice which prepares and cultivates various types of soil and land, Franquist said. This breaks up the natural surface of the desert, exposing “silty almost sandy soil.”

Making sure the dust under remains under control is ADEQ’s main concern, Franquist said.

“It started off as an environmental problem that’s manifested itself into a public safety issue.”

ADEQ has agricultural inspectors who are rotating in and out to manage the site.

Kameron Lee, a public information officer for the Arizona Department of Public Safety, said the Gorilla-Snot solution appears to be working. However, they are watching the National Weather Service to see if an increase in winds might cause more dust to arise, especially as people travel during Memorial Day weekend.

Today will be the first true test of “Gorilla Snot.” Let’s hope it works. We will monitor the area near San Simon. https://t.co/Y2cm5oZ5Ob

If more dust should arise, Franquist recommends the public “shelter in place,” essentially limiting your amount of exposure outside for those near the affected area, as exposure to high amounts of dust could cause respiratory issues.