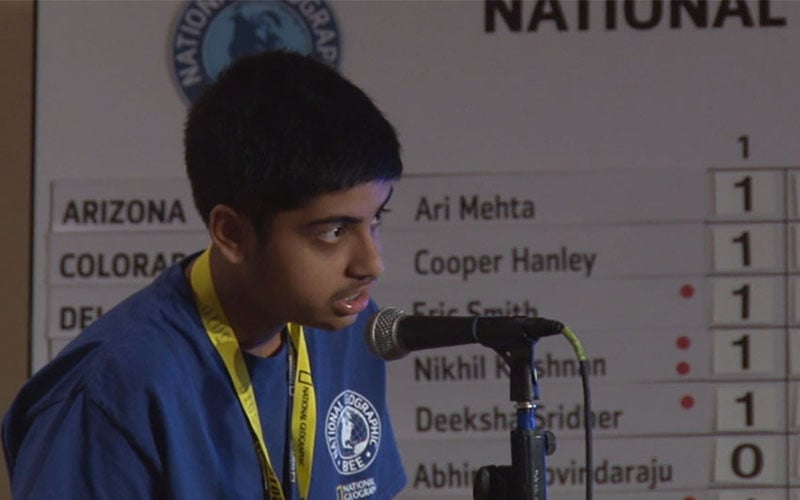 Phoenix eighth-grader Ari Mehta said he studied geography for three hours a night in preparation for the National Geographic Bee, where he represented Arizona this week. (Photo by Veronica Acosta/Cronkite News) 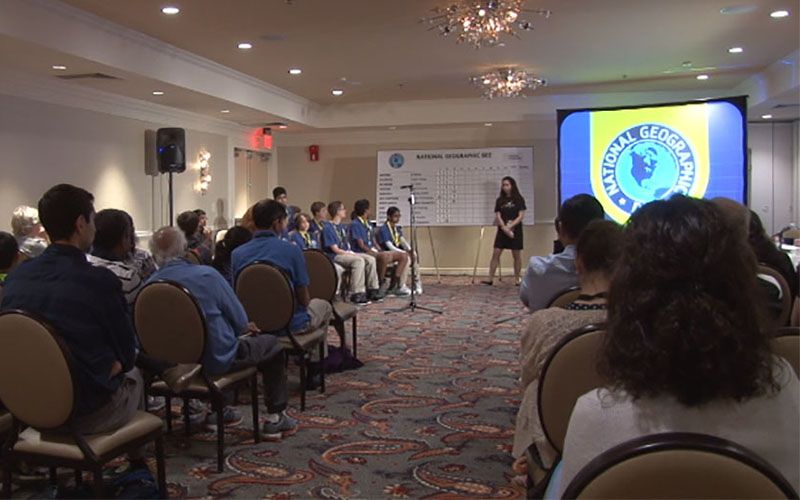 The 54 state and territorial winners squared off in small groups Monday in the first round of the National Geographic Bee to select the 10 who will compete in Wednesday’s finals. (Photo by Veronica Acosta/Cronkite News) 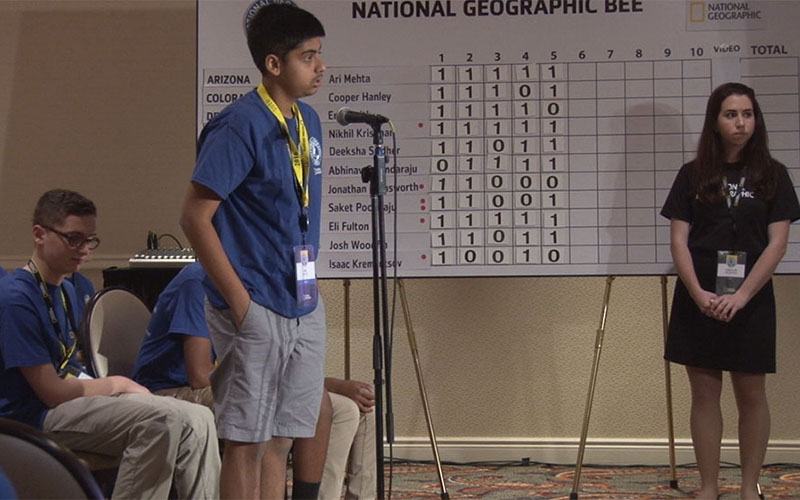 Explorer Middle School student Ari Metha answers one of 10 questions that contestants faced in the first round of the National Geographic Bee in Washington. (Photo by Veronica Acosta/Cronkite News)

WASHINGTON – Phoenix eighth-grader Ari Mehta said he spent three hours every night poring over maps, atlases and textbooks on geography, but all that hard work was undone in about an hour Monday.

That’s how long it took to finish the preliminary round of the National Geographic Bee, with Ari failing to cut for the 10 students from around the country who will advance to the finals Wednesday.

“After I finished the preliminary rounds, I still wasn’t sure if I might get called into the tie-breakers,” Ari said late Monday morning. “Turns out I wasn’t.”

But he can still boast about being the Arizona state champion, beating about 100 other fourth- through eighth-graders in early April to advance to this week’s national competition with 53 other contestants. They represented every state, the District of Columbia, Defense Department schools and one each from U.S. territories in the Pacific and Atlantic.

Each student submitted a video, worth six points, arguing what new national park they would build in their state. They were then broken into small groups Monday for the more traditional bee format, with each student standing in front of a microphone to answer 10 geography questions.

They were asked questions like which two African countries are separated by the Mano River – Liberia and Sierra Leone – and which Persian Gulf country is an archipelago of 30 low-lying desert islands – Bahrain.

Ari, a student at Explorer Middle School in Phoenix, said he was “nervous, but hopeful” as he headed into the preliminary, backed by the “three hours a day at least” he spent studying “maps, atlases, textbooks that had certain physical geography terms” and current events.

The nerves showed slightly as he approached the microphone, hands shoved in his pockets, and looked up at the ceiling before answering. When he got a question wrong he immediately dropped his head. Other contestants banged their fists or looked toward their parents after booting a question.

Every correct answer earned a point. The first round was over in about an a hour and the contestants with the 10 highest scores – from the video and the first-round questions – advanced to the finals.

Ari’s final score of 13 – he missed two questions in Monday’s bee – was not enough to make it to the next round. Among the questions he missed was one about the Mexican state that is home to several Mayan pyramids – Quintana Roo.

At stake in the National Geographic Bee – this is the 28th annual edition of the competition – are scholarships from $10,000 for the third-place finisher, $25,000 for second place and $50,000 for the national champion.

Besides being able to claim that they are state champions, all the contestants get a trip to Washington, with tours of the city and the monuments when they aren’t competing.

Ari may have finished out of the finals this year, but said that his love of geography will continue – even though he’ll be too old for the bee after this year. But he will probably cut back on the three hours a day of study, he said.