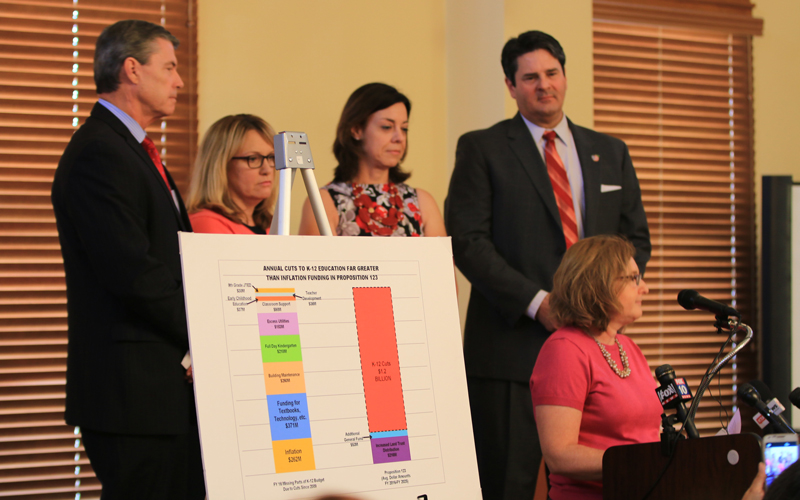 A coalition of education advocates said that Prop 123 is a good first step in K-12 funding but not enough. Those who attended the conference included (left to right) Dick Foreman of Arizona Business and Education Coalition, Julie Bacon of the Arizona School Board Association, Beth Simek of the Arizona PTA, Joe Thomas of the Arizona Education Association and Pati Urias of the Children’s Action Alliance (Photo by: Selena Makrides/Cronkite News).

Leaders for the Arizona PTA and the Arizona Education Association for teachers, said at a news conference at the Capitol that the measure to provide $3.5 billion over a decade is only a first step in efforts to improve K-12 funding.

“It was never intended to be a long-term fix to fix Arizona’s funding issues,” said Julie Bacon, president-elect of the Arizona School Board Association.

The coalition of education organizations estimates Arizona schools have been underfunded $1.2 billion since 2009. That figure is more stark given that the financial picture for Arizona schools is historically woeful, they said.

“That gap is hampering our success. It’s really holding our students behind, keeping our workforce down and holding our economy behind,” said Dana Wolfe Naimark, president and chief executive of the Children’s Action Alliance.

Naimark outlined several goals for the Prop 123 money, including keeping qualified teachers in Arizona by offering them competitive salaries, updating technology, supplies and textbooks for the classroom and repairing crumbling infrastructure.

Local school districts will decide how their allocations from Prop 123 will be spent but supporters often touted a salary hike for teachers as a likely use of the money.

Nearly 90 percent of teachers recruited to Arizona from other states leave within five years and 62 percent of public schools have open teaching positions, according to a report from the Arizona Department of Education.

“We don’t have a list of everyone but overwhelmingly, unless a district was in dire financial straights before Prop 123, districts are averaging about a three, four, five percent raise to their teachers,” said Thomas, a high-school history teacher in Mesa.

Christine Marsh, a teacher at Chaparral High School in Scottsdale who is the Arizona Educational Foundation’s 2016 Teacher of the Year, understands that priorities vary by district.

“We’re suffering, but we’re not in crisis like some of the other districts are, especially in the rural areas,” Marsh said. “That’s the local control model. It’s going to depend on the particular school board.”

The next few months will be crucial to securing more money for K-12 education, coalition members said.

Naimark said the education coalition “will be asking every candidate for the state Legislature what their commitments are for short-term and long term funding for public schools.”

Gov. Doug Ducey, the public face of Proposition 123, said in a statement “schools will see funds as early as next month.”

About 51 percent of voters approved the proposition, based on unofficial ballot results.