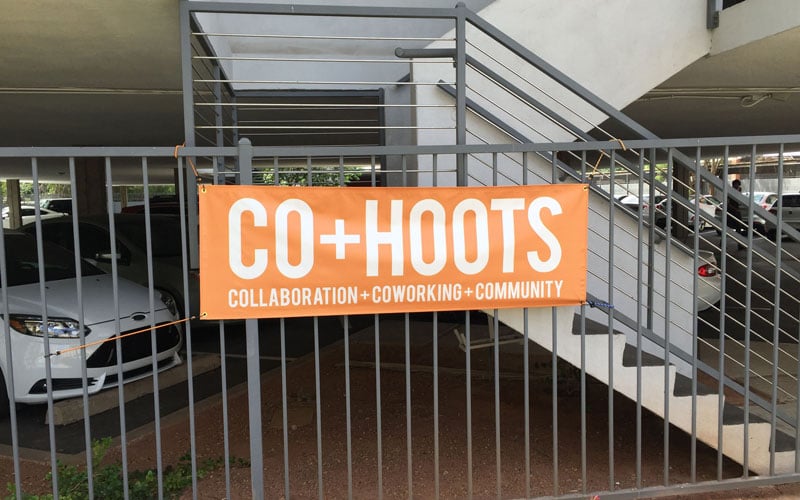 Jenny Poon founded CO+HOOTS in 2010, and in April it announced an educational program for female small business owners in Phoenix. (Photo by Zac Pacleb/Cronkite News)

The men’s team, on the other hand, hasn’t won either competition and doesn’t rank in FIFA’s Top 20 teams.

But the women get paid less than the men.

In February, five members of the women’s national team filed a lawsuit with the Equal Employment Opportunity Commission against the U.S. Soccer Federation claiming wage discrimination. The news sparked a national dialogue about equal compensation for equal work.

But the headlines were just the latest in a battle that has raged for decades.

Women earned 82.5 percent of men’s weekly median earnings in 2014, according to the U.S. Bureau of Labor Statistics.

In Arizona, women who were full-time salary workers earned $669 per week, 80.9 percent of a man’s weekly earnings. However, one local expert described the dip as a “blip” and said historically, the state does better than the national average when it comes to paying women an equal wage.

Experts said it will take time, but people at the federal, state and local levels are working to close the gender wage gap completely.

Jenny Poon, founder of the business collaborative group CO+HOOTS, said she thinks the time has come for the gap to finally be extinguished altogether. She is one of the people working locally to focus on the issue.

“It’s already been 50 years since we’ve passed legislation that says women should receive equal pay for equal work, but we still have this struggle,” she said. “That’s crazy. Fifty years later, and we’re still talking about this. It’s because we haven’t fought hard enough for this to be a universal norm.”

Why is there a pay gap?

According to a national survey from CareerBuilder that polled 3,200 workers and 220 human- resource managers in 2015, only 35 percent of female respondents believed there was equal pay in the workforce.

“I hate that people say that it’s just a matter of time because it really doesn’t just happen,” Poon said. “Just because we are moving (in the right) direction doesn’t mean it’s a set course.”

Arizona Small Business Association CEO Rick Murray said that a big reason why the gap still exists is because of women’s general reluctance to ask for a raise.

“A lot of it is on this education process of helping women understand their opportunity when they have one,” Murray said. “It’s OK to ask for the same wage, and that it’s not going to affect their employment statuses either. A lot of that education has to happen at the grassroots level.”

A 2013 survey conducted by LinkedIn indicated that only 26 percent of the women who responded asked for a raise, but 75 percent of those who did ask actually received a raise.

Experts have cited other reasons as well: Women often work in fields that pay less. One Harvard University economics professor told NPR that women often seek out jobs that offer more flexibility, which can reduce their income. And then, there’s outright discrimination.

Poon also said women are generally the first to sacrifice.

“In the family, at home – moms are usually first to sacrifice if anything needs sacrificing, and that often carries over into work as well,” she said. “Often times, women choose to take a lesser payment. They choose to – maybe not intentionally – they choose to essentially give up more than typical people would, and as a result, they get paid less.”

Poon and Murray said a variety of factors play into how employers pay their employees, including experience, education levels and longevity at a company – and those can play a role why they pay women less.

Poon said she wants to specifically address the wage gap when it comes to minorities. African American and Hispanic women earned 36 and 46 percent less than white men in 2013, according to the U.S. Bureau of Labor Statistics.

“(The wage gap) been a problem since the beginning of time just because the roles the women have played versus men in society,” Murray said. “I think it’s just a generational issue. We as a society are just playing through that and have seen the importance of women in the workforce and how important it is that we pay everybody equitability.”

Why is Arizona’s gap smaller?

Since 1997, Arizona has traditionally had a smaller gap compared to the national average. But in 2014, its gap was below the 82.5 percent clip across the country. However, Murray sees that number as just a blip.

“Technology knows no gender,” Murray said. “I think we really have a lot of technology-based type of businesses, and I think that that certainly plays a factor.”

There are an estimated 132,000 high-tech jobs in Arizona, according to a TechAmerica Cyberstates report.

However, the National Partnership for Women and Families maintains that the wage gap exists no matter the industry or occupation.

“It’s an evolving process, and it’s just a matter of time before we won’t see (a gap),” Murray said. “It’ll really be based on experience and skill rather than whether you’re a female or male.”

What’s happening to decrease the gap?

People at several levels are making efforts to close the gap.

Federal efforts: The EEOC announced a new initiative to attack the pay gap and other gender disparities. It will require employers with more than 100 employees to provide a report featuring earnings by gender, race and ethnicity.

“The initiative is designed to elicit greater transparency about pay practices and to allow the EEOC to target where there may be potential discrimination,” said Pavneet Uppal, regional managing partner at Fisher & Phillips in Phoenix.

Uppal said if the proposal proceeds as scheduled, the rulemaking process will conclude in September, and employers would have to submit the requested data in September 2017.

State efforts: Earlier this year, state Sen. Katie Hobbs, D-Phoenix, introduced Senate Bill 1436, which would have allowed businesses to obtain a certification indicating that they pay equally for equal work.

“There’s no way for businesses to proactively demonstrate that they do this,” Hobbs said. “I would think if you’re an employer, you might want something like that because it would protect you in a lawsuit.”

The bill died during this legislative session. However, Hobbs said she will reintroduce it in the next session.

Although the proposal did not create new regulations, it changed city’s nondiscrimination ordinance and increased educational efforts. The ordinance included a caveat stating employers can pay men and women differently if the pay is based on a variety of factors, not based on gender.

Gallego said she and Phoenix’s Equal Pay Task Force are focused on educating women on why and how to ask for raises.

“(The wage gap) isn’t intentional the way it might’ve been 50 years ago,” Gallego said. “Sometimes, just through many factors, including the fault of the person in the job themselves, it’s not high on people’s priority lists.”

Tempe and Tucson officials also have announced efforts to draft their own equal pay for equal work ordinances, according to azcentral.com

Other efforts: Poon founded CO+HOOTS to create a collaborative space for entrepreneurs and other businesspeople. On April 11, it launched a small business scaling program to educate female business owners and women in general.

“The better educated a woman business owner is, the more successful her business is, the more confidence she gains to pay herself standard or higher rates,” Poon said in a statement. “And once women understand where they stand financially, they can pay themselves reasonably. If this could happen with every female entrepreneur, our economy would soar.”

“It takes a lot of people actively making progress toward that and actively creating initiatives to help the pay parity to keep up forward momentum, and that doesn’t mean the people on the ground saying, ‘we want this to happen,'” she said. “It means actually putting in legislation, passing legislation, that supports this.

“We have the excitement. There’s enough people that believe this should be a thing, but what it comes down to is, we can talk about it as much as we want, but if there’s actually nobody there holding us accountable, it’s going to continue to (fall short).”