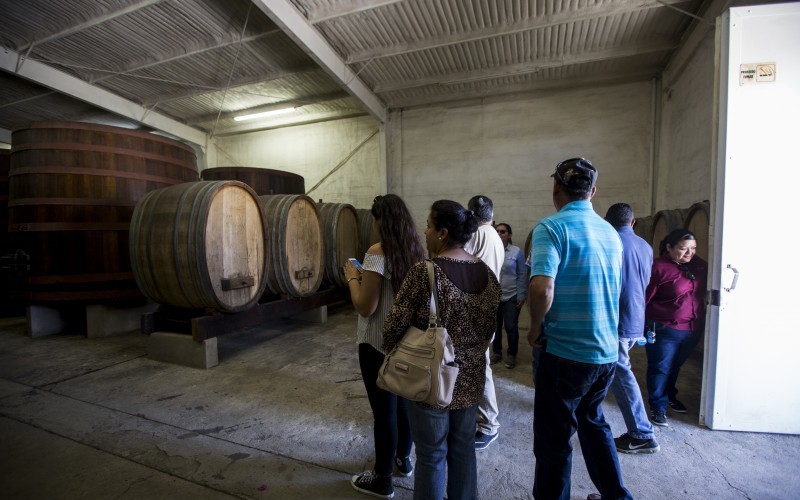 Visitors tour the L.A. Cetto Winery aging room on an April Sunday. The winery, in Valle de Guadalupe, Baja California, Mexico, is the largest winery in the country at 1,200 hectares (about 2,965 acres). (Photo by Sean Logan/Special for Cronkite News) 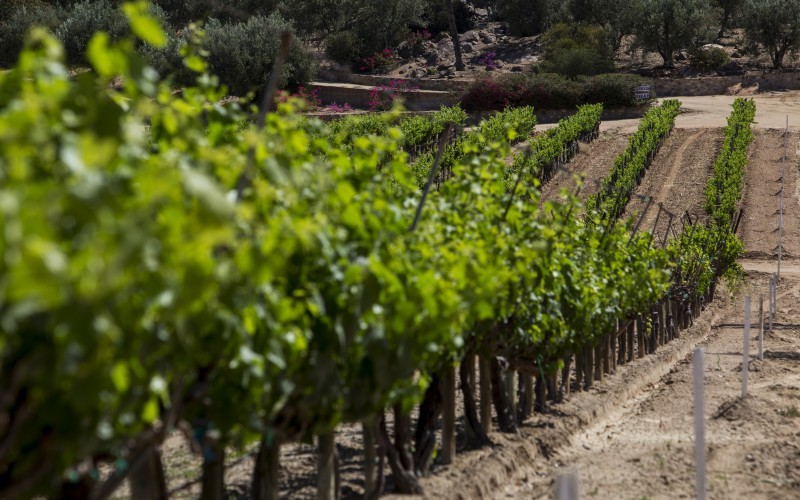 Some of the vineyards at L.A. Cetto Winery. The many soils in the region allow the winery to grow grapes for up to 60 varieties of wine, from aromatic viogniers to deep cabernet sauvignons. (Photo by Sean Logan/Special for Cronkite News) 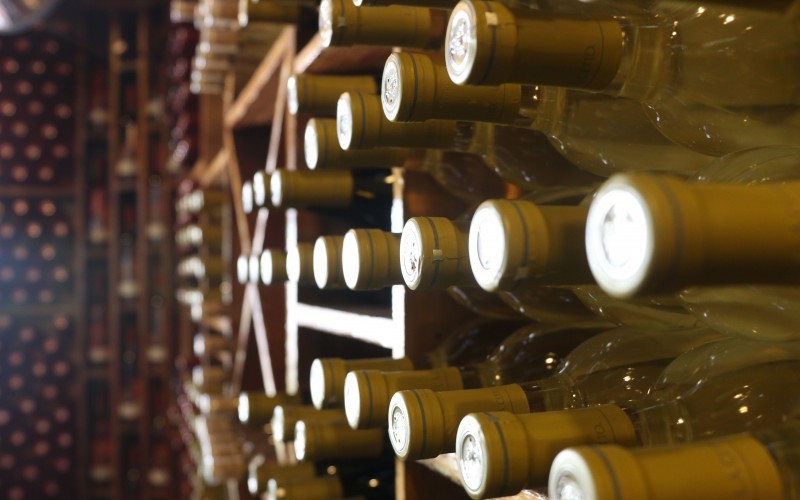 Wine bottles sit in the L.A. Cetto vineyard store, a stop on Baja California’s “Ruta del Vino,” or Wine Route. The route features more than 70 wineries, a booming business that is a cause for celebration here. (Photo by Cammeron Neely/Cronkite News) 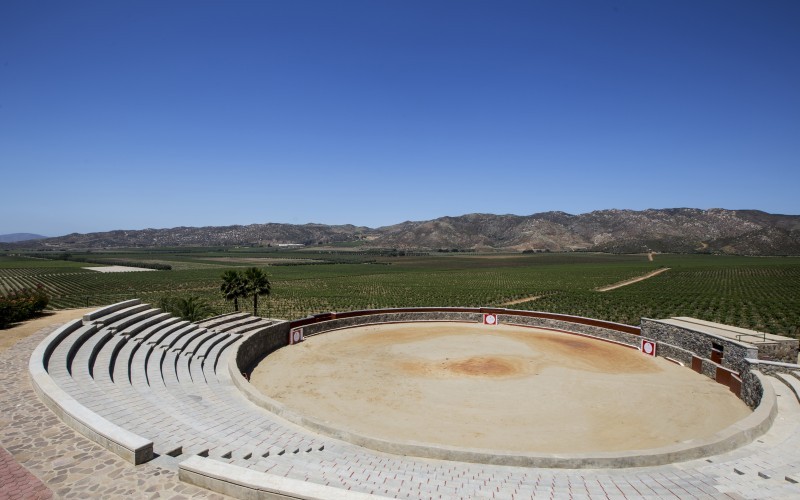 There’s more to do than sip wine along the Wine Route. L.A. Cetto’s complex features a shop, tours, tastings – even a bullfight at the winery’s own bullfighting ring next to its vineyards. (Photo by Sean Logan/Special for Cronkite News)

Here, buses filled with tourists park and unload at the southern entrance of the L.A. Cetto winery, Mexico’s largest winery. It’s a little after 10 a.m. on a Sunday.

A large portion of the tourists, holding engraved wine glasses in hand, gather around two tour guides. They give a basic demonstration on how to evaluate and taste wine. At one point during the demo, the crowd is asked to take a sip of wine, breathe in through the mouth, and then swallow the wine while exhaling through the nose. The motion, which produces an obnoxious slurping noise, is meant to oxidize the wine and therefore alter its flavor. Predictable giggles and a few spills follow.

Being from Chile, I asked one of the tour guides, Adrian Sandoval, how these Mexican wines compare to those of my native country, known for its wine valleys. His answer was simple: He only drinks wine from Mexico, of course.

The slurping demo is emblematic of the Valle de Guadalupe experience, whose Wine Route features more than 70 wineries, all producing, bottling and distributing wines year-round. The booming business is a cause for celebration, and Mexico is raising a glass to what the region has to offer.

“There’s a lot of people that thought before you couldn’t come to Mexico because of the violence,” Sandoval said. “It’s not like that…. One of the things we have to show is the cultural, the culinary and all the wine vineyards.”

Sandoval, 24, studied culinary arts at the Autonomous University of Baja California in Ensenada. With dreams of opening up his own restaurant, he knew he needed to learn more about wine and how to pair it with different dishes. He got a job at the L.A. Cetto winery in Valle de Guadalupe about a year ago and now leads tours of the location both in English and Spanish.

Sandoval and the guides at L.A. Cetto call themselves, perhaps jokingly, the “Avengers” of the winery. Like many other young, gastronomically inclined Mexicans, they want to be a part of a culinary world whose doors just recently opened.

“Now I have a respect for the beverage,” Sandoval said. “I know all the processes (behind it), all the people involved in the process to give you the final product.”

L.A. Cetto was there at the start of the wine revolution in Mexico. Established in 1928 by Don Angelo Cetto, it is one of the oldest wineries in the region, deeper into the Valle de Guadalupe and with a more extensive advertising campaign – you can see the luxurious billboards advertising their name up in Tijuana some 70 miles away. It is also the largest winery in Mexico; they have 1,200 hectares of vineyards total (around 1,200 athletic fields) and produce about 12 million liters of wine a year.

With the large size comes large variety; Sandoval said L.A. Cetto makes up to 60 varieties of wine, from aromatic viogniers to deep cabernet sauvignons. They are able to produce so many different wines because of the multiple types of soils found in Valle de Guadalupe, he said.

“You can walk about one mile, but at the end of that mile it’s a different soil,” he said. “That lets us have richer variety in a smaller space.” The harvest season for the grape won’t start until late July or early August and will run until the end of October. The rest of the year is spent bottling and distributing wines.

L.A. Cetto wines — and those of neighboring wineries like Monte Xanic and Barón Balché — often end up on both sides of the border, purchased by restaurants and store owners, including in Arizona, looking to pair Mexican food with Mexican wine. L.A. Cetto exports about 35 percent of all its wine, Sandoval said.

The spike in wine tourism started a couple of years ago. It was after the region experienced its worst bouts of violence, spearheaded by powerful cartels moving drugs and people across the border. Concerts by popular artists were scheduled around Baja California, and celebrity chefs from Mexico decided to open up restaurants in Tijuana and San Diego. The region’s tacos are some of the most well-known around the world. A new fusion cuisine, “Baja Med,” was created using the seafood and produce of the coastal cities.

“This area is now known on an international level,” said Arcelia Velasco, a visitor from Ensenada. “They don’t have to be afraid to come visit.”

Regional wine became a natural fit with these new ventures. Now, the L.A. Cetto winery can see up to 3,000 visitors on a busy day during the Holy Week or spring break periods.

“This is hard business when you work in a restaurant or vineyard, because the vacations or holidays are the days they most need you to work,” Sandoval said. “Since I entered this career, they told me … ‘Forget all the holidays.'”

For tourists, the L.A. Cetto experience is “choose your own adventure.” You can decide what selection of wines you would like to taste: traditional, reserve or premium. You can reserve a tour of the fermentation and aging rooms (where hundreds of oak barrels — some tagged by mischievous visitors — hold some of the finer wines for up to 25 months). You can secure the terrace for a wedding proposal, as someone did the day before my visit. Or if you’re there at the right time of the year, you can watch a traditional bullfight in their ring, overlooking the vineyards. There is also the boutique, where you can purchase most all the wines produced by the winery.

This may come off as elegant on paper, but Sandoval stresses that L.A. Cetto is trying to appeal to even the most casual of wine drinkers. You could find an L.A. Cetto bottle of traditional cabernet sauvignon for $6 or $7 dollars at a Walmart along the border, for instance.

“We have a really huge production of wines, and that can let us make the prices more affordable,” Sandoval said. “That’s the philosophy of our winery.”

The tourists come from all across Mexico, from as far as Sinaloa and as close as Ensenada. In San Ysidro in the United States, hotel brochures advertise Valle de Guadalupe and other wineries in San Diego. Sandoval and his colleagues recount stories of drunk spring breakers exiting their tour bus at L.A. Cetto, beer cans in hand, after visiting dozens of other wineries in the Wine Route.

For the Mexican tourists, these experiences are shifting the image of Baja California from one shadowed by the previous decade’s violence to one looking to a brighter future.

“I think that many of the tourists here … will spread the word that everything is much more calm,” said Ismael Velazquez, a visitor from Ensenada. “It’s not like before. The situation from before is improving. The fear is going away.”

Yolanda Godoy, who traveled from Tijuana in one of the tour buses, believes the Valle de Guadalupe brings nothing but positive effects to Baja California.

For Sandoval, working at the local wineries is a chance to share a unique piece of Mexican culture, as well as to enjoy the tranquility that comes with isolation.

“The first days you start working here you’re amazed about all the beautiful views, but then it becomes common,” he said. “There’s a lot of people that are sitting in an office instead of viewing this landscape between all the mountains. I’m starting to feel really small.”