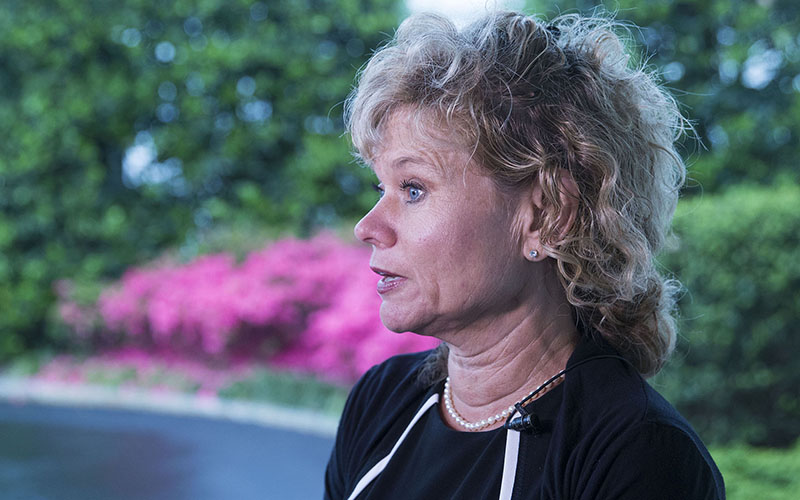 Chaparral High School teacher Christine Marsh, Arizona’s Teacher of the Year, talks after a White House ceremony about her concerns that the state’s schools are being underfunded. (Photo by Jessica Swarner/Cronkite News) 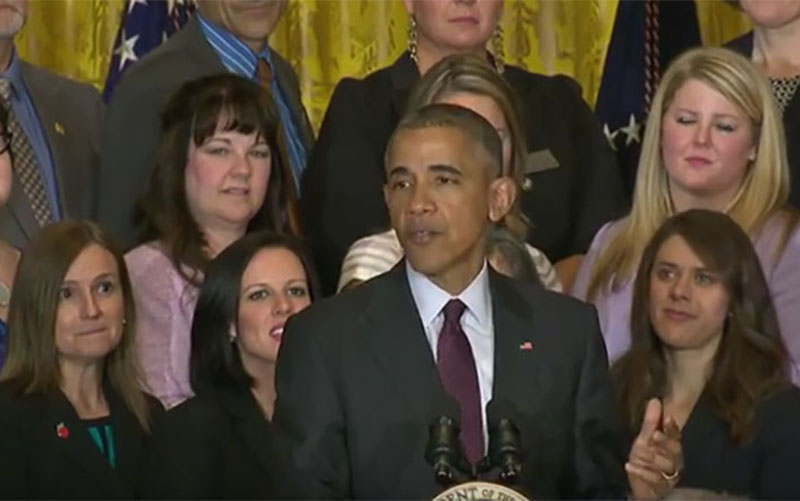 President Barack Obama, speaking at the annual Teacher of the Year ceremony, said that teachers get into the profession for love of children, not for money, but that schools still deserve more funding. (Photo courtesy whitehouse.gov)

WASHINGTON – Arizona Teacher of the Year Christine Marsh said education in the state is “under attack,” echoing President Barack Obama’s call Tuesday for more funding for education during a White House ceremony to honor teachers.

“In too many states, we are underfunding public education,” Obama told the supportive audience in the East Room, calling on state legislators and governors to keep in mind the importance of education in their communities.

Marsh, who teaches AP English to juniors and seniors at Chaparral High School in Scottsdale, was one of the teachers of the year from every state and territory invited to the White House event.

“The longer I am (Arizona’s) Teacher of the Year – I’ve been in this position since the first of the year – the more I’m convinced that there are powers that are flat-out trying to destroy public education,” she said outside the West Wing after the ceremony.

Marsh said she expressed her frustration to the president during a “10-second” exchange while she was having her picture taken with him.

She said the constant underfunding of schools makes it hard to keep teachers, which makes it harder for the remaining teachers to do their jobs.

National Teacher of the Year Jahana Hayes, a Connecticut teacher chosen from dozens at Tuesday’s event, said in comments before the president spoke that a shortage of teachers is one of schools’ biggest problems.

“We are at a critical juncture. Many states are facing challenges attracting and retaining teachers, especially minority teachers,” Hayes said.

Marsh said she and fellow teachers used to think seeing 150 kids per day was a huge number. Now, she said, her current number of around 167 is on the lower end of the scale, with some teachers responsible for as many as 185.

“We can’t meet the individual needs of your kids, because there’s just too many of them,” she said. “And that’s why we lose so many teachers – of course, the lack of pay, but … also because they feel like they cannot do justice to each kid that’s in front of them.”

The Obama administration plans to help alleviate this issue by training 100,000 STEM – or science, technology, engineering and math – teachers by 2021, a goal the president pledged Tuesday will be met on time.

Thinking about the challenges schools face, Marsh said she remembers a moment in college when she realized she couldn’t change the world on a large scale – so her next best option was to turn to teaching and make many small positive changes. She is now in her 24th year in the profession.

Marsh said even though she came to the nation’s capital with her concerns in mind, the experience has been very positive and the White House staff “treated us like royalty.”

Marsh said she was honored to attend the ceremony, and hopes to use her position as Arizona’s Teacher of the Year to create a public dialogue about what is happening with education, which she said is dying death by a thousand cuts.

“I think if they are going to kill off public education, there should be a public debate, and that’s part of the dialogue I’ve been trying to get elevated,” she said. “Let’s debate it on a public scale and not be so covert about it.”