Sue Chilton of Arivaca, front, and Nan Stockholm Walden of Sahuarita, far right, were among the border residents invited to testify on the problems of living near the border. (Photo by Sara Weber/Cronkite News) 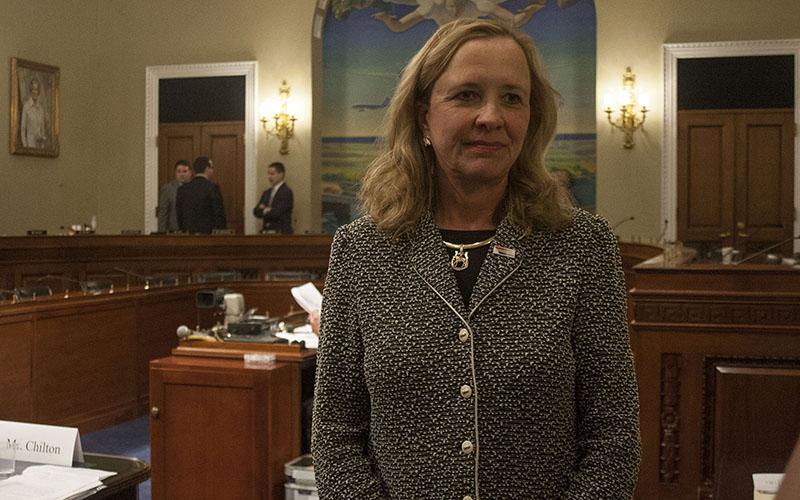 Nan Stockholm Walden of Sahuarita recognized the “difficult job the Border Patrol” has to do, but said that their work too often leads to conflict that threatens local residents. (Photo by Sara Weber/Cronkite News) 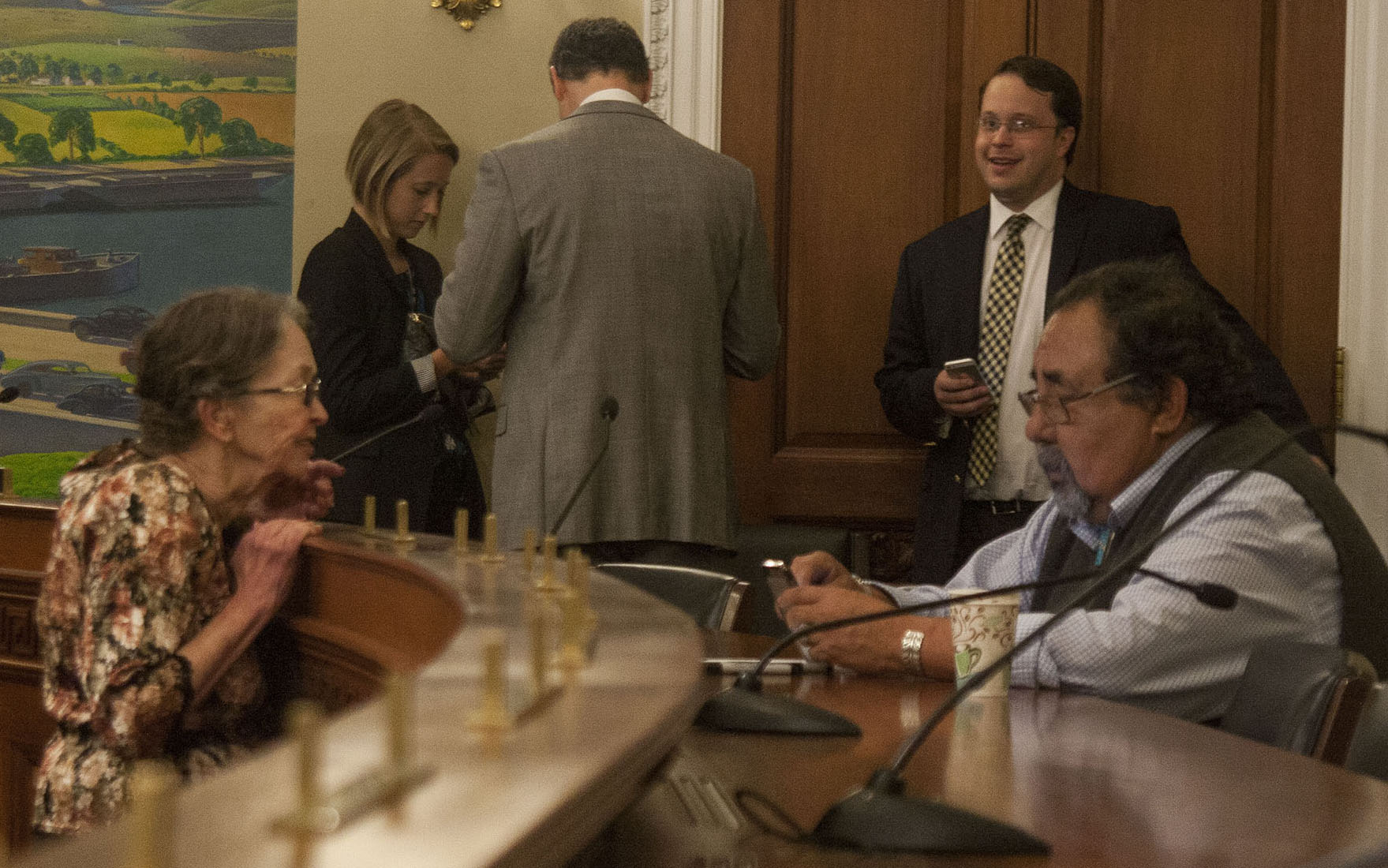 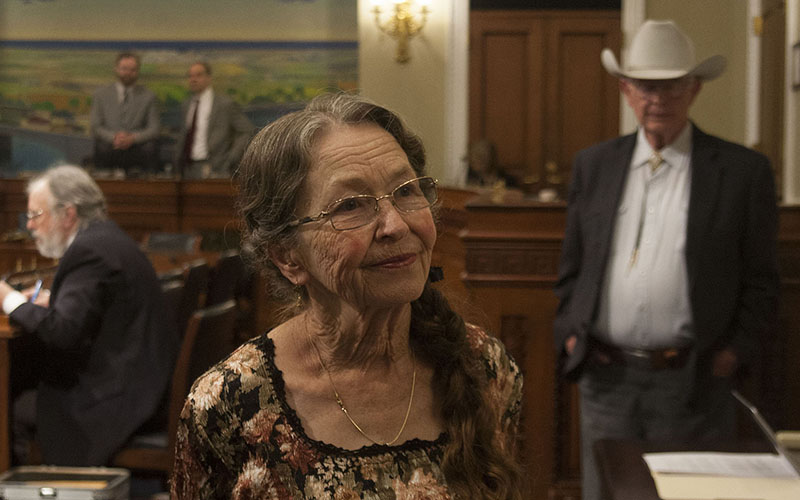 Arivaca resident Sue Chilton told a House panel that she regularly sees people cross the border fence near her property and worries about drug- and gang-related violence. (Photo by Sara Weber/Cronkite News)

WASHINGTON – Southern Arizona residents Nan Stockholm Walden and Sue Chilton didn’t agree on much in their testimony to a House subcommittee Thursday, but they did agree on one thing – something needs to be done to better protect border communities.

The two were part of a hearing by the House Natural Resources Subcommittee on Oversight and Investigations into the impact that federal management of public lands has on border communities.

“In reality, many parts of the southern border … are already covered in fences and barriers – 700 miles worth,” said Rep. Raul Grijalva, D-Tucson. “The approach we need is pro-family, pro-environment, pro-business and, indeed, pro-security.”

He also said that “knee-jerk” and “fear mongering” rhetoric is creating a false idea of what is happening on the border.

But Rep. Louie Gohmert, R-Texas, said in his opening statement that among the problems on the border are wildlife conservations efforts that “unnecessarily put Border Patrol lives in danger.”

“Our government has failed to deal with the unprecedented and tragic humanitarian and national security crisis that occurs each day along our northern and southern borders,” said Gohmert, the subcommittee chairman. “It’s the fact that drug cartels and human traffickers have long used our unsecured borders to conduct their operations.”

While committee members sparred over the effect conservation efforts have on border patrols, Chilton called such regulations a “transparent ruse” that benefits only the criminals. Chilton, who lives in Arivaca, testified that protections for jaguars in particular have caused control of the area around her border ranch to be “ceded to cartel control.”

She and her husband, Jim, own a ranch 55 miles southwest of Tucson, where she said she sees people cross the smaller border fence near her property and worries about drug- and gang-related violence.

“The ‘wildlife’ that would actually be delighted by the efforts is a criminal outfit headquartered in Sinaloa, Mexico,” she testified.

But Walden, of Sahuarita, said in her testimony that environmental advocates are too often blamed for inhibiting border protection. She lives 20 miles from the border and said she is vice president and counsel for Farmers Investment Co., Farmers Water Co. and the Green Valley Pecan Co., which are 30 miles from the border.

“Protection of our public lands is part of our national security; the two are certainly not in conflict,” Walden said. “It’s important to have border security, but we know that our federal lands are a major draw for activity in our area and we don’t want to destroy the features of the land or the flora and fauna that make them so special.”

Walden recognized the “difficult job the Border Patrol is tasked to undertake” and praised the Tucson sector ranch liaison, who has done “an excellent job helping us cooperate with Border Patrol.” But too often, she said, that mission leads to conflict with local residents.

“Those of us that live in areas surrounding the checkpoint have, for years, been exposed to the degradation of our public safety because of them – high-speed car chases through our neighborhoods, gunshot victims and the like,” she said in her testimony.

“I’ve experienced a high-speed chase by Border Patrol through my front driveway … that I am sure would have killed an employee or me had I not been in my home office at the time,” Walden said.

But Chilton said she would like to see Border Patrol agents have more freedom, not less.

She worries that rules protecting the jaguar keep Border Patrol agents from being able to get to her property in a timely manner. She said she and her husband offered to let the Border Patrol use some of their property to help them with their mission, without response so far.

“We offered them the use of our land for a $1 lease per year so they can have a forward operating base at a known incursion point,” Chilton testified. “My husband has offered to front them the dollar if they can’t afford it, but years have passed and there is no action of which we are aware on this offer.”