Professional track athletes are training for the Rio Olympics with the company Altis in Phoenix. (Photo by Altis.World) 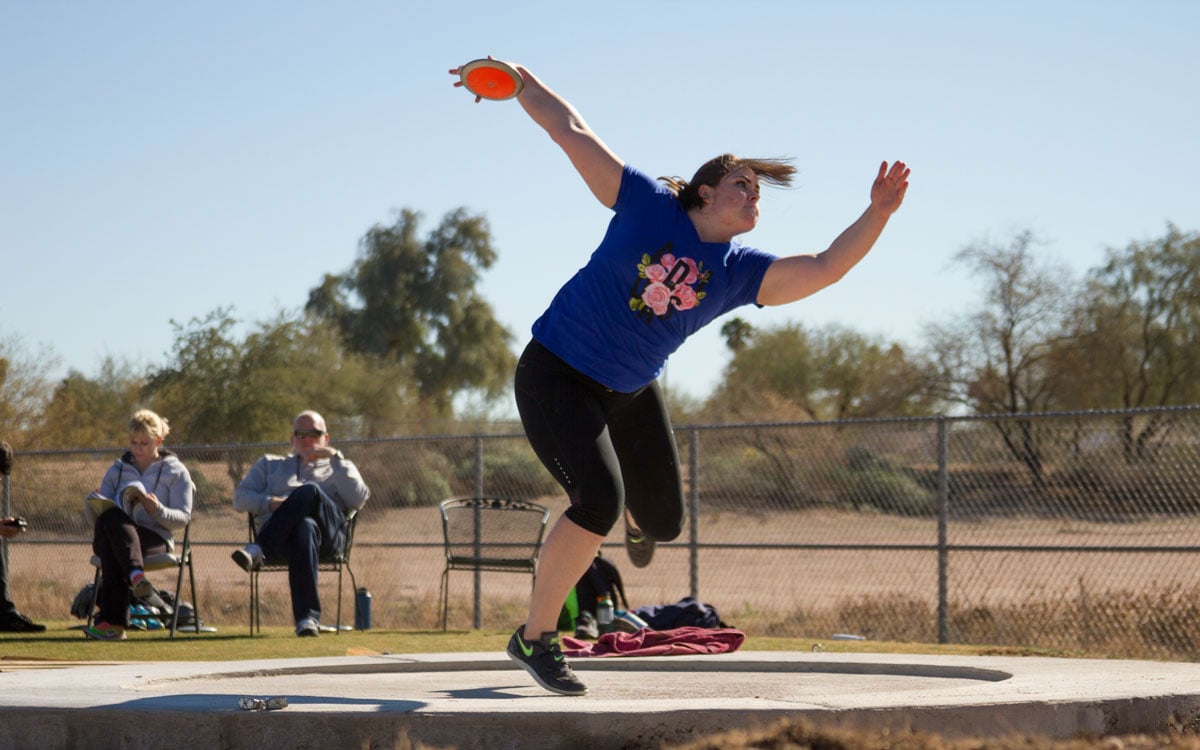 Founder/CEO of Altis John Godina (second from left), hopes to purchase land and build his own facility in the next couple of years. (Photo by Altis.World)

Altis was a sacred site in ancient Greece, near the location of the first Olympics. Godina said his marketing people didn’t know that until they researched it later, but it was the perfect fit.

“They were looking through a process of things and accidently came up with the name Altis,” said Godina, a two-time Olympic medalist in the shot put. “It’s a very lucky happenstance. . . They literally just created that out of thin air.”

The modern Altis is an elite training business catering to professional track and field athletes. It has facilities around the world but is headquartered in north Phoenix.

Godina launched the company in 2005 as a sports-training facility before deciding to specialize in the throwing field events in 2008. He expanded the program to include all track-and-field events in 2012.

Godina came up with the idea for the company because of his experiences as a professional track athlete and the challenges he knew those athletes face.

“I was lucky enough that I had everything I needed around me and a good support system,” he said. “But I knew countless athletes that struggled to have access to facilities as well as quality coaches and medical necessities and all of those things.

“My whole goal was to make a better system for elite athletes trying to pursue the Olympics.”

Currently, Altis has three facilities; one in Phoenix, one in Vancouver, Canada, and one in Aberdeen, Scotland. They also have two satellite facilities in Northern California that specialize in training athletes in the throwing events.

The main facility in Phoenix features workout areas for both track and field athletes, and athletes from all over the world train there.

“We have a partnership up in Canada where we have 10 athletes based in Canada, but they spend a lot of their time down here,” Godina said, “So we partnered with a coach up there who is versed in our system. He actually comes down with them a lot.”

Mikel Thomas is a 110-meter-hurdles specialist from Trinidad and Tobago who spent his college career at the University of Kentucky.

Trinidad and Tobago’s record holder in the 110-meter hurdles, Thomas found Altis two years ago while he was a volunteer coach at the University of Florida. He quickly saw how professional the environment was and how different the Altis program was from other training groups.

“In the track and field world, you pretty much pay attention to any major moves,” Thomas said. “This is definitely something that is the first of its kind. The collective of great minds of coaching, the collective of great athletes, and also the great support on the medical side is amazing.

“I was looking for something a little more professional and an environment where it is just all elite, all professional, and this is the only place I could find. So it was the best place for me to be.”

Thomas is pleased with how all of the coaches are on the same page.

“The coaches are great, from the interns all the way to the head coaches,” he said. “It’s an amazing opportunity where everyone is on one court, and everyone pays attention. You get the same response, the same feedback, the same message across the board, and having that is very vital.”

Thomas also said that the quality of athletes at Altis is second to none, and it helps that one of the athletes that trains there is American Aries Merritt, the world-record holder and reigning Olympic champion in the 110-meter hurdles.

“The opportunity to learn, not just from the coaches and the athletes, but to also be in an amazing environment where iron sharpens iron, there is no place like it,” Thomas said.

Most athletes are referred to Altis by their coaches. Godina said others join through an online application process, and he has a recruiting director to sort through the applications for athletes who are a good fit.

“A lot of times, the coaches have reached out to us and said, ‘Hey I think it would be good for them to come to you,’ ” Godina said. “We have a lot of college coaches that send us athletes that they think are good enough to make it here, and that’s helpful.”

Part of the attraction is Arizona’s mild weather during the winter, when athletes are training for the big outdoor meets in the summer.

“We need the best weather during the off-season, when we are doing all this base work,” Godina said. “During the season, most of our best athletes are heading all over the globe, so it’s kind of location-neutral once they get into the season.”

Thomas agreed that Arizona’s weather is part of the allure of training with Altis.

“It never rains,” he said, “and being an outdoor sport, it’s a huge plus, especially in the winter months.”

Thomas is hoping to build off a strong 2015 season and go into the Olympic Games this summer in Rio de Janeiro even better.

“We are looking forward to hopefully making the Olympic final after coming off of my first World Indoor (Championships) team this past year,” he said. “The Olympics are always the focus, but to be at a high-performance level of consistency, that’s No. 1. Hopefully go to Rio and bring back home a medal.”

For now, Altis rents the track facility at Paradise Valley Community College for its Phoenix location, but Godina has bigger goals.

“I think our next big thing on the horizon is the purchase of land and building our own facility rather than working out of everybody else’s facility,” he said. “That is kind of a critical thing for us, and there is a variety of partnerships that are in play.”