The confluence of the Colorado and Little Colorado rivers in the Grand Canyon has spiritual significance to many local tribes. Cultural heritage is just one of the reasons cited for a plan to add 1.7 million acres of protected land around the canyon. (Photo by Sophia Kunthara/Cronkite News) 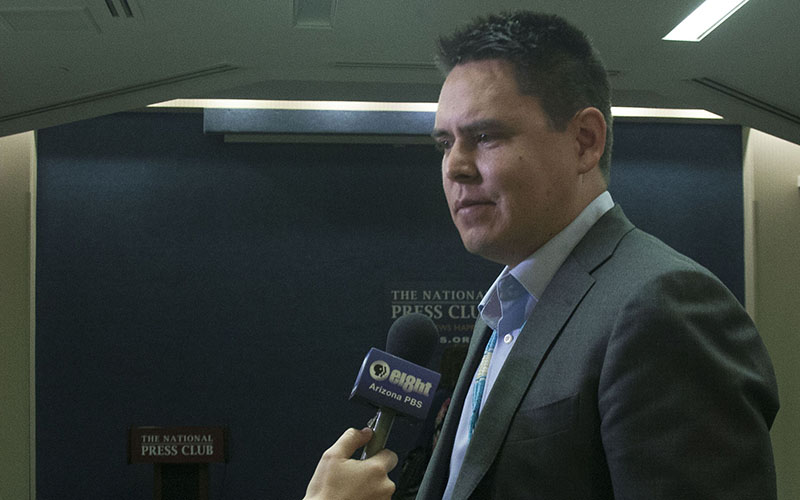 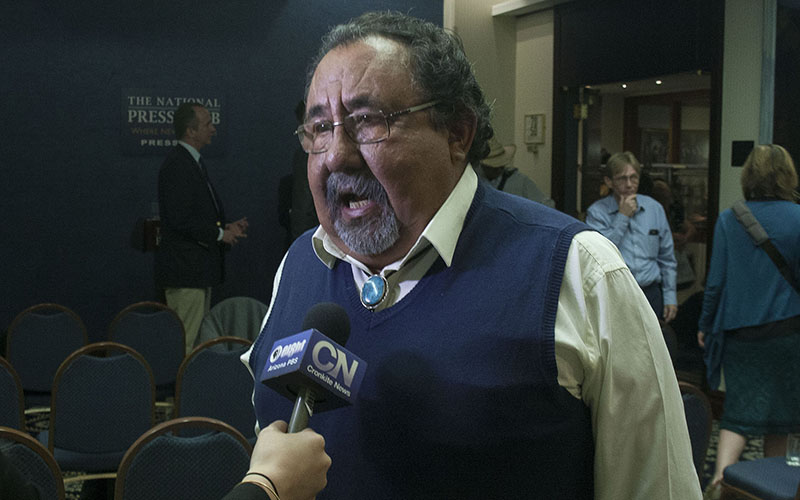 Rep. Grijalva, D-Tucson, said he decided to call on the president to declare a new monument at the Grand Canyon after becoming convinced his bill to create the monument could not get a fair hearing in the Republican-led House. (Photo by Jessica Swarner/Cronkite News)

Grijalva said he was calling on the president to invoke the Antiquities Act after becoming convinced that his bill to create the same monument would not get “a real, honest, rational hearing” from a Republican-led House.

Grijalva specifically cited opposition from Rep. Paul Gosar, R-Prescott, and Arizona Republican Sens. John McCain and Jeff Flake, who he said are “on the wrong side of the angels on this one.”

None of those lawmakers could be reached for comment Tuesday on Grijalva’s remarks, but Gosar has been a blistering critic of the president’s use of the Antiquities Act.

After Obama invoked the act in February to create national monuments on about 1.8 million acres of federal land in California, Gosar wrote the leaders of the House Appropriations Committee demanding that they include language in the budget restricting the president’s ability to use that authority. That letter was signed by 30 House Republicans, including three others from Arizona.

“Presidents on either side of the aisle shouldn’t have unilateral authority to create massive new national monuments by executive fiat without local public input,” the letter stated. “It is, after all, the people living near these national monuments who are most affected by their creation.”

The proposed Greater Grand Canyon Heritage National Monument Act would protect 1.7 million acres in the canyon’s watershed, prohibiting mining and other natural resources development. It would make permanent a current 20-year moratorium on uranium mining that was imposed by the Interior Department.

Mohave County Supervisor Buster Johnson said he is concerned both by the mining ban, and by Grijalva’s attempt to get the president to use the Antiquities Act.

“I was always afraid this might happen,” Johnson said. “This act has been used before to skirt the public.”

Johnson said mining has the potential to add $29 billion to the economies of Mohave County and Washington County, Utah, and would provide better jobs than tourism could. A national monument designation would block these job opportunities and threaten public access to the federal lands, he said.

But Havasupai Tribe Councilwoman Carletta Tilousi, one of the tribal leaders who joined Grijalva at Tuesday’s news conference at the National Press Club, said the monument designation is vital because uranium mining could destroy her tribe’s land.

“We are nearing extinction,” Tilousi said. “We want my people to remain left alone from international mining companies.”

Tilousi said any money generated by mining likely would not help her tribe.

“We fear that international companies will come in, mine uranium, leave a toxic smell in our water and in our air, and we don’t want that to happen,” she said. “It is not money for us.”

Johnson said the mining companies are more careful than that and would be sure to cause “very little disturbance” to the land.

But Coconino County Board of Supervisors Chairman Art Babbott said that while there would be an economic boost from uranium mining, the risks it poses are “not theoretical” and not worth taking. There would certainly be economic benefits from a monument designation, he said.

“I absolutely am a supporter of the objective and the outcomes that the legislation seeks to achieve,” said Babbott, who was careful to note that it was a personal position and not the official position of the board. “It’s in our economic interest, it’s in our environmental interest.”

Gosar – who organized a meeting in Kingman earlier this month called “Government Land Grabs: Exposing the Truth” – said the Antiquities Act has been abused by the president as a favor to environmental groups. A presentation at the meeting charged that tribal backing for the monument plan was a “myth” and that environmentalists were really behind it.

But speakers at Tuesday’s event included representatives of the Navajo, Hopi and Hualapai, in addition to the Havasupai.