Arizona State University’s Real Dream Team beat the University of Texas at Arlington in the Heroes of the Dorm grand final e-sports competition. The win earns the team members tuition for the rest of their college careers. (Photo courtesy of Blizzard Entertainment) 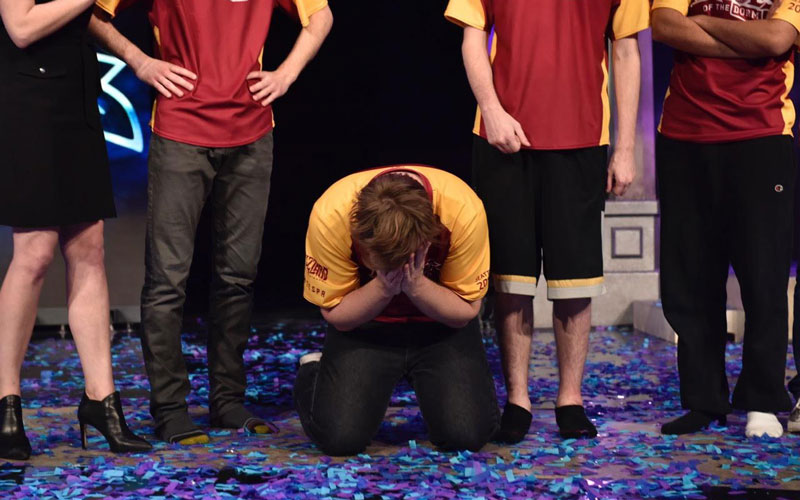 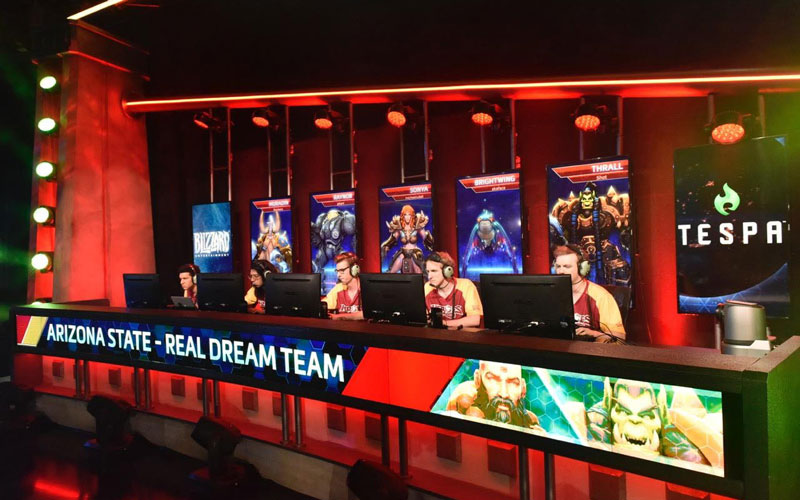 No, the applause and hoopla wasn’t aimed at the NFL’s Seattle Seahawks or the MLS’ Seattle Sounders FC, the two teams who normally occupy the stadium.

Instead, the cause for celebration centered on six students from Arizona State University who had won a national video game tournament.

Real Dream Team was one of more than 450 college teams in the second “Heroes of the Dorm” tournament, a competition featuring the online game “Heroes of the Storm.” After beating University of Texas at Arlington in the grand final on April 10, the ASU students took home the national championship and each earned up to $75,000 in tuition for the rest of their college careers.

Last year was the first time ESPN offered national live coverage of a collegiate e-sports event. “Heroes of the Dorm” gave the audience a view into that growing world.

“The industry has been around for years,” said Tyler Rosen, program manager for Blizzard Entertainment, best known for creating the “World of Warcraft” games. “I think everything we’ve been doing has been building up to this moment. We finally reached that critical mass where it’s hard to ignore and where a lot of people are looking inward.”

Rosen, whose company hosted the event, said the inaugural tournament started a “national dialogue” about e-sports, and from there, it has opened up avenues for growth in the industry.

“It all starts with a vision,” he said. “We see a very bright future with e-sports. We see a lot of energy, a lot of passion, a lot of excitement in the market. And we’ve been talking to broadcasters. ESPN was one of them that really saw that vision. They saw what we saw in e-sports, and they wanted to work with us to try to put it on their platform. It was a really bold move for them because they’ve never done anything like that before.”

Udall, a sophomore at ASU, said he and his teammates Parham “Pham” Emami, Stefan “Akaface” Anderson, Austin “Shot” Lonsert, Isaiah “Snickers” Rubin and Vann “Vannity” Childs practiced four to six hours per day as a team, which did not include individual practice.

“It’s surreal. There’s nothing else that can sum it up,” Udall said. “I hope I can use it to further e-sports at ASU. We always talk about how ASU is a school of innovation, and I think e-sports is a major sport in the future, and I think ASU is definitely going to be on the front end of that.”

Although e-sports haven’t been shown on a mainstream, national stage before “Heroes of the Dorm,” the viewership is there. According to Riot Games, the 2015 League of Legends World Championships drew in 36 million unique viewers on live-streaming platforms Twitch and Azubu, the most in the event’s history. In comparison, the recent NCAA Men’s Basketball Championship game averaged 17.8 million viewers, according to Nielsen.

“All I can say is that it’s really healthy for e-sports,” Lonsert said. “I never imagined myself to be on television and be like the equivalent of a football player with people saying, ‘I could be like him one day.’ I still don’t think that.”

Lonsert, Udall and Anderson are professional “Heroes of the Storm” players, joining teams and competing for money in tournaments that normally play out over the span of one weekend.

“It’s crazy because you put in so much work. You work for months. You train for months, and then you have one weekend, and that’s it,” Udall said. “That’s where you prove all of your skill. If you don’t show up that weekend, if you have an off weekend, it’s kind of all for naught. It’s pretty crazy being a professional gamer just because that aspect of it.”

Lonsert, a senior sociology student at ASU, said “Heroes of the Dorm” offered the biggest financial gain a player can win playing Storm. He hopes to see e-sports continue to cross over into mainstream media.

“(E-sports) being on ESPN and just growing, it’s amazing,” Lonsert said. “I love all the publicity it’s getting. I love talking e-sports. I love talking nerdy to people that don’t understand it, and they want to learn. I can just share my culture with people.”

Rosen, who also co-founded e-sports network TeSPA, said they are still figuring out what will be next as far as tournaments and events, but he expects to continue to see the uptick in popularity across the country.

ESPN has ramped up its coverage of e-sports as well, launching an e-sports section on its website in January and publishing an e-sports-centric edition of ESPN The Magazine in May 2015.

“Heroes of the Dorm really sparked a lot of attention for the industry, and since then, we’ve seen a lot of movement,” Rosen said. “We’ve seen a lot of growth. We’ve seen new players and influencers get into the space, so I think that’s only going to continue.”

Udall said he doesn’t expect e-sports to take over traditional sports like football and basketball in popularity. But he said he wouldn’t be surprised to see its popularity rival mainstream athletics.

“I think in the next five to 10 years, we’ll see seasons,” Udall said. “There will be a Heroes of the Storm season and a League of Legends season. It’ll kind of essentially … like every other sport, and it will just have a network dedicated to it, and there will be lots of money flowing into it. You can be a professional video game player, and I think at some point, it will reach a point like now if you’re a professional (Heroes of the Storm) player, you’ll be famous and a celebrity, which I think is cool.”

Whether or not it becomes a mainstream hit, Udall said he wants to lay the foundation for ASU to become a collegiate e-sports powerhouse. Lonsert, on the other hand, was just happy to bring home some hardware for his school.

“Hey, at least ASU won something this year,” he said.