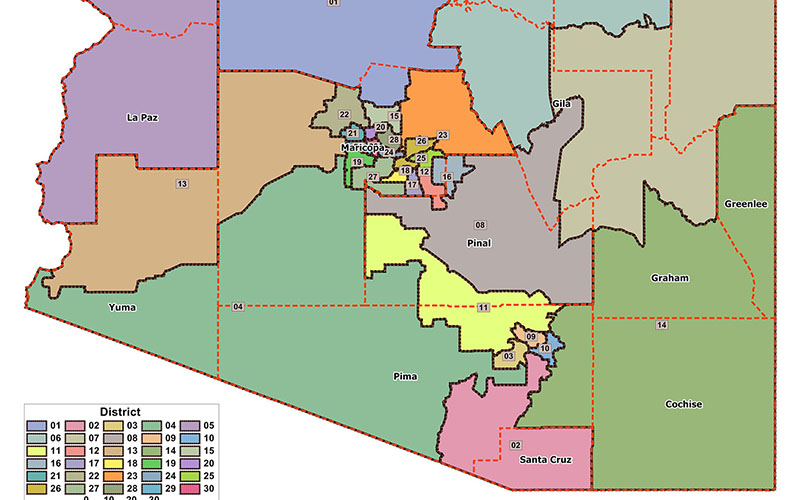 Arizona legislative districts, as drawn after the 2010 census. Population varies as much at 8.8 percent between the 30 districts, but the Supreme Court affirmed the map. (Map courtesy Arizona Independent Redistricting Commission)

WASHINGTON – The Supreme Court unanimously affirmed the boundaries of Arizona’s legislative districts Wednesday, saying the commission that drew the districts had legitimate reasons for putting more voters in some districts than in others.

A group of voters had argued that the districts drawn in 2012 by the Arizona Independent Redistricting Commission violated the “one-person, one-vote” principle by packing Republican voters into larger districts, giving greater weight to Democratic votes in the process.

Population varied by 8.8 percent between the largest and smallest districts, but Justice Stephen Breyer’s opinion said that the court has never demanded “mathematical perfection” in districts. He said the variances were justified by the commission’s desire to preserve minority representation and meet standards of the Voting Rights Act that were in place at the time the districts were redrawn.

“We are thrilled that the ruling was decided in favor of the commission and even happier that the decision was unanimous,” said Joe Kanefield, a lawyer for the redistricting commission.

Attorneys for the voters who challenged the districts said they knew it was an uphill battle, but they still disappointed in the outcome.

“The ruling was relatively short and narrow, leaving some questions unanswered,” said Attorney General Mark Brnovich Wednesday in an emailed statement. “I’m not sure how much precedential value it will have in the future.”

But Thor Hearne, who argued the case. against the redistricting plan, disagreed with the ruling.

“This weakens the one-person, one-vote principle we had in the past,” Hearne said. “The most important part of this case is the implications it could have in the future, they could be significant.”

In the commission’s initial draft, there was a 4.07 percent difference in population between the largest and smallest districts. But it reconsidered after its lawyers and consultants suggested that the plan might not pass muster with the Justice Department, which was required to OK any changes in Arizona voting regulations under the law in place at the time.

– Click on the map to see Arizona’s legislative districts and how far above or below the ideal size of 213,068 residents they are. Darker blue districts are the most heavily populated, lighter blue are more lightly populated. (Cronkite News graphic by Sara Weber)

One of the things the department looked for was a consistent number of minority districts between old and new plans. The old Arizona map had 10 such districts, but the consultants said the Justice Department might find that the new map fell short, according to Breyer’s opinion.

With that in mind, the commission redrew the boundaries, increasing the variance between districts to 8.8 percent in what would become the final plan.

But Breyer said the court has said variances of up to 10 percent are acceptable if there are “legitimate considerations.” Even though the part of the Voting Rights Act that required “preclearance” by the Justice Department was voided by the Supreme Court in a 2013 ruling, it was the law when the new Arizona plan was approved and legitimate consideration for its actions, Breyer wrote.

He also said that the voters had failed to prove that the commission acted in an attempt to give partisan advantage to Democrats.

Hearne said the court’s finding that disparities up to 10 percent are passable opens the door to districts with population difference in the thousands. Though the map may have had a Democratic bias this time, he said, “next time it might be a Republican bias.”

This is not the first time the commission has been before the court, which ruled last summer that Arizona voters were within their power to set up an independent body in 2000 and take redistricting authority away from the Legislature. Arizona is one of only six states with such a commission.

Arizona Democratic Party spokesman Enrique Gutierrez called the latest ruling a “huge victory for Arizonans” and said “it is awfully disappointing to see the GOP use taxpayer money to attack a voter-approved measure.”

But he cautioned the ruling alone isn’t enough.

Democrats who sued state and Maricopa County officials over the botched March 22 presidential preference election have said that the Supreme Court’s 2013 easing of the Voting Rights Act was largely responsible for problems at polling places.

“These issues need some future federal oversight, they can’t be left in the hands of the GOP-led Legislature,” he said.