Arizona Electric Power Cooperative CEO Patrick Ledger, right, testified in support of a bill to force power marketing administrations to spell out costs of wildlife conservation in the energy it sells to utilities like his. (Photo by Danika Worthington/Cronkite News) 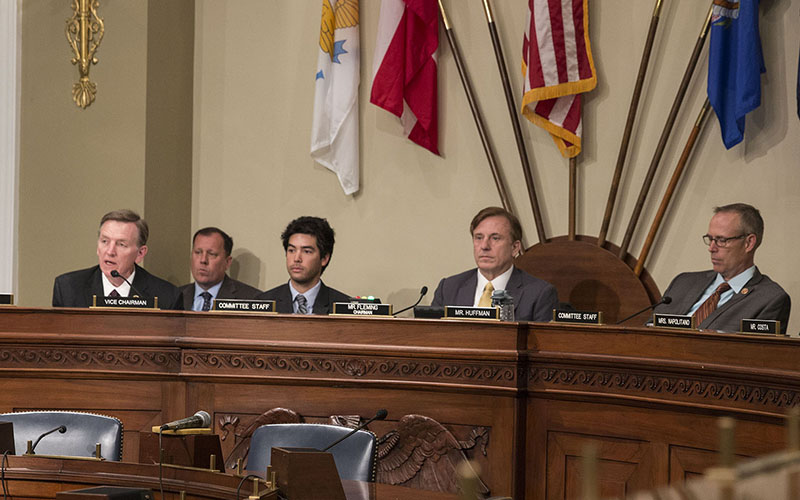 Rep. Paul Gosar, R-Prescott, left, insisted his bill, the Environmental Compliance Cost Transparency Act of 2015, would not affect wildlife conservation efforts but would just put a price tag on them. (Photo by Danika Worthington/Cronkite News)

WASHINGTON – Arizona Electric Power Cooperative CEO Patrick Ledger told a House panel Wednesday that federal power administrations are keeping local utilities in the dark when it comes to what’s in their bill.

Ledger was testifying in support of Rep. Paul Gosar’s bill that would require power marketing administrations to include costs associated with fish and wildlife conservation regulations on monthly electric bills to wholesale consumers. Utility companies could then decide whether to report that to their retail customers.

Gosar, R-Prescott, said federal environmental statutes, including the Endangered Species Act, change how power generators release water from federal dams, which affects the amount of power they can generate. They then turn to more expensive and typically fossil-fuel based power to make up for lost energy – at the cost of the consumer.

“My bill doesn’t repeal a single environmental law or take a position on the amount of money being spent,” Gosar said. “All it says is customers have a right to know these costs.”

He said conservation costs accounted for about 30 percent – or $757 million – of last year’s power rates from Bonneville Power Administration, which provides power to utilities he represents in the Northwest.

A spokeswoman for the Western Area Power Administration, which provides power to utilities in Arizona and other states, said it “welcomes open and transparent communication in all of its business operations.”

Lamb said Western does not set environmental costs, instead serving as the billing agency for costs associated with the operation of the multipurpose water projects that generated hydroelectric power. She said collecting the information Gosar’s bill requires could incur additional costs for Western.

Ledger said that AEPCO faces mounting cost increases from “strident environmental regulations” and compliance requirements. He said any cost is passed on directly to AEPCO’s customers, “residents or rural areas who are already struggling.”

The Fish and Wildlife Service declined comment on Gosar’s bill Wednesday. But both Downen and Gosar were quick to assert that the bill does not attack fish and wildlife conservation regulations, but rather provides information for consumers.

“More knowledge about fish and wildlife costs is not an impetus to do less for fish and wildlife,” Downen said during his testimony. “Rather, it creates ownership in the efforts underway and serves as an inducement to create better, more effective means of assisting fish and wildlife in the future.”

Ledger said after his testimony that AEPCO is OK with cost increases as long as they are justified, but the cooperative does not now have the information to make that assessment.

But conservation is not the only mystery, he said. Rather, he said, it’s “one of those pieces of the puzzle in terms of costs,” pointing to an additional lack of transparency behind increasing transmission and administration costs.

“We get some answers but when we try to dig into the numbers, we really don’t get the access and transparency that we think we deserve, especially from a federal agency,” Ledger said.

His testimony acknowledged that Western has been shifting toward greater transparency in recent months, noting the addition of a page on its website that provides some information that AEPCO has long been requesting.

“It’s important to us because we identify all of our costs when we send our bills to our customers and there are some mysteries when we get costs from the Western Area Power Administration,” Ledger said. “And the more we can know about how those costs are passed down, the better.”