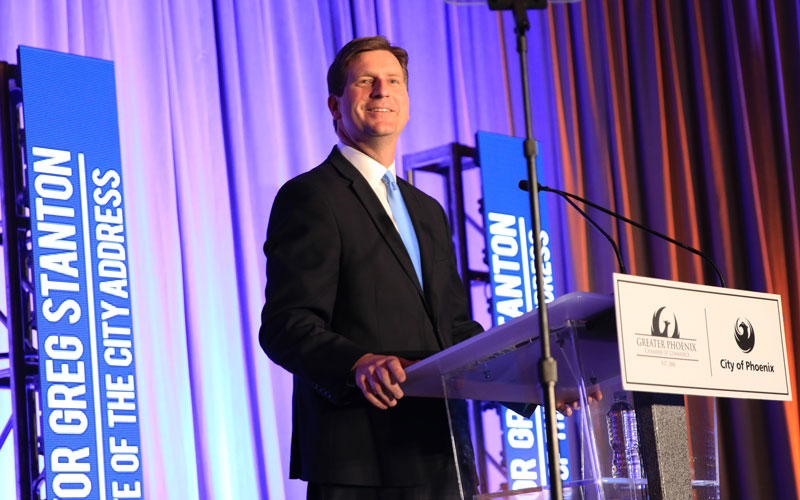 Phoenix Mayor Greg Stanton said he has a personal stake in the Phoenix Suns remaining downtown. He grew up a Suns fan. (Photo by Cuyler Meade/Cronkite News)

As an exclamation point at the end of his State of the City address at the Sheraton Grand Phoenix hotel in downtown Phoenix, Stanton laid bare his intentions to help the Suns build a new arena, and made clear that he wanted the WNBA’s Phoenix Mercury and the Coyotes to share the venue.

“I will do everything I can to pursue a course that makes a new facility home to the Suns, Mercury and the Coyotes,” Stanton said. “Building two new professional arenas in our region simply doesn’t make fiscal or common sense.”

While expressing interest in a new venue, the Suns are committed to remain in their current home until the lease ends in 2021.

“First, a new arena must not only keep the activities we have in place, but bring in new events and new people downtown,” he said.

“The second principle: I will absolutely not raise taxes for a new arena – any plan for a new venue must only use the existing sports facilities fund.”

“We have an existing sports arena fund, which is paid for by hotel tax and car rental tax,” Stanton said. “That has a balance in it. It’s what paid for the existing arena, and it’s been building new balance in the meantime. The point I was making was that we’re not going to pass any new taxes. Your sales tax, your property tax, won’t be affected by any relationship that we have with the Suns or Coyotes.”

Stanton said the site of the potential new venue was still a point of discussion, but he did mention one site in particular that was in consideration.

“You’ve heard a lot about whether a site that is kitty-corner to the current arena, where the older convention center, the civic plaza currently is,” Stanton said, “but we have to be open-minded. When we enter into a discussion, a negotiation, you’ve got to be open-minded to other options.”

Stanton seemed unconcerned whether the Suns (which are owned by same group that owns the Mercury) would want to give up sole occupancy of their venue. Pointing to successful NBA-NHL partnerships like the Lakers-Clippers-Kings shared usage of Staples Center in Los Angeles, Stanton expressed confidence that an agreement could be achieved.

In his address, Stanton said this is more than good business for the city. As a Phoenix native, it’s personal.

“I grew up in Phoenix in the ‘70s and ‘80s, which is to say I grew up a Suns fan,” Stanton said. “The ‘Madhouse on McDowell.’ Throughout the years, the franchise has been a partner to the city, working with us to revitalize downtown.

“The team has told me that in the near future, it will begin to look for a new home. It is essential we keep our team downtown.”

In other points, the mayor said: