A protester holds a sign that echoes the arguments of many who support deferred deportation policies: That they will help keep families together. (Photo by Madison Alder/Cronkite News)

The Judicial Crisis Network’s Carrie Severino said policy should come “through our constitutional process” not through “the unilateral action of one person, the president.” (Photo by Madison Alder/Cronkite News)

A young protester’s T-shirt makes the case for the administration’s DAPA program, which would allow parents of U.S. citizens to apply for a deferred deportation. (Photo by Madison Alder/Cronkite News) 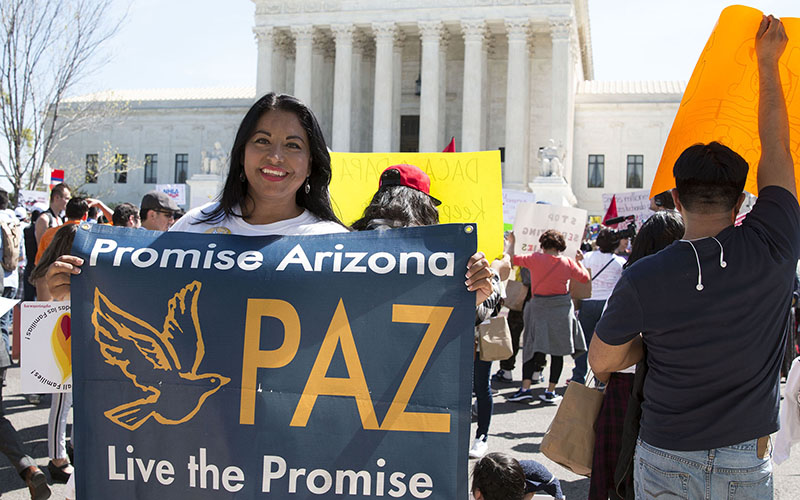 Phoenix resident Claudia Faudoa, a member of Promise Arizona, who came out to rally at the Supreme Court in support of the administration’s deferred deportation policies. (Photo by Madison Alder/Cronkite News) 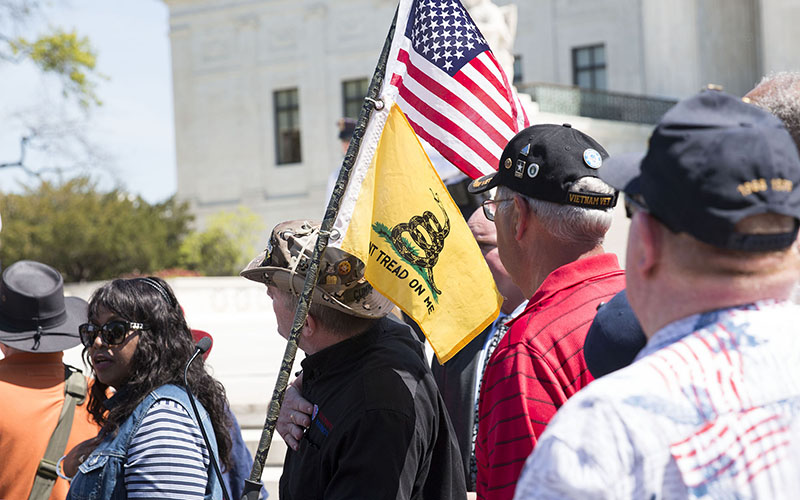 Most of the protesters supported deferred deportation, but some were there in support of the states’ argument that the policy was an overreach by the administration. (Photo by Madison Alder/Cronkite News)

Thousands turned out to rally as the Supreme Court heard a challenge by 26 states, including Arizona, to the Obama administration’s deferred deportation policies. (Photo by Madison Alder/Cronkite News) 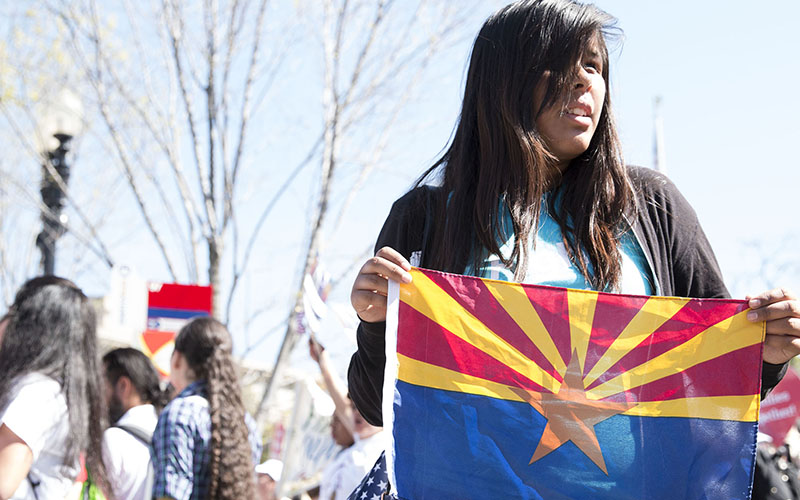 Laura Reyes has personal reasons for hoping DACA is upheld – it would allow her to pay in-state tuition in college and will help “my brother, my sister and a lot of people.” (Photo by Madison Alder/Cronkite News)

WASHINGTON – Arizonans were among the thousands who rallied outside the Supreme Court Monday as justices considered a challenge by 26 states, including Arizona, to the Obama administration’s deferred deportation policies.

“We don’t want any more families separated,” said Phoenix resident Claudia Faudoa, over deafening chants of “si se puede” and “we cannot be divided” outside the court.

But lawyers for the states were inside the courthouse arguing that the administration did not have the authority to expand DACA, the Deferred Action for Childhood Arrivals program, or to create DAPA, a similar deportation deferral program for parents of children born in the United States.

The policies, unveiled in 2014, have been on hold while the legal challenge has worked its way through the courts. The majority of protesters outside the court insisted it is time to unfreeze the policies.

On a warm and cloudless day, the crowd outside the court enjoyed a party atmosphere – mariachi music played against the backdrop of thousands of multicolored signs banners and flags from across the nation and the globe – broken only by the emotional signs many carried.

Like Faudoa, many of the messages urged the court to “keep families together,” and one child’s T-shirt even pleaded “don’t deport my dad.”

“This cause is very dear for me, I am undocumented myself,” said Faudoa, who made the trip from Arizona with Promise Arizona, a Latino advocacy group.

But a small knot of opponents urged the court to look past the emotion and rule on what they say was the president overstepping his authority and bypassing Congress to create the policies.

Severino, speaking in both Spanish and English, said many people on both sides of the issue agree there needs to be immigration reform but that reform “has to happen through our constitutional process, it cannot happen through the unilateral action of one person, the president.”

DACA, first introduced in 2012, allows immigrants who were brought into this country illegally when they were children, to apply for a two-year deportation deferral, provided they pass a background check and have no criminal record, among many criteria. If approved, they can get work authorization and apply for a driver’s license.

In November 2014, Obama announced plans to expand DACA and create DAPA – the Deferred Action for Parents of Americans and Lawful Permanent Residents – which would allow the parents of U.S. citizens or those with lawful permanent resident status to apply for deferred deportation.

But Texas sued and a federal district judge blocked implementation of the policies nationwide while the states pursued their legal challenge, an injunction that has been upheld through the appeals process.

Supporters of the policies insist that the president was within his authority to enact the policy, and that the high court has agreed in previous cases.

“The president … all presidents, are backed by the Supreme Court in the past on every one of these executive order issues,” said Rep. Raul Grijalva, D-Tucson. “I think this court will do the same thing and I think it will be a great benefit to the nation as a whole.”

Grijalva, who attended the rally to meet with DACA and DAPA supporters, said a Supreme Court ruling in favor of the administration would let these Arizona residents “come out of the shadows, declare themselves and, if they qualify,” get some degree of state recognition, “like the DREAMers did.”

With the enactment of the programs, residents “would be in a position then to be protected but more importantly, be productive,” he said.

Arizona resident Laura Reyes would be one of those people. As she waved a state flag outside the court Monday, she said she wants DACA “unfrozen” because it could not only help her get in-state tuition when she attends college in the fall, but also help “my brother and sister and a lot of people in Arizona.”

“I’m here to make a change for them,” she said.

An estimated 137,000 people in Arizona are eligible for one of the programs according to a report by the Migration Policy Institute, some of the 5 million nationwide that the institute and the White House have said would be covered by the expanded deferred deportation programs.

A decision in the case is not expected until early summer, and court observers have said the shorthanded court could split 4-4 on the case, which would let the lower courts’ rulings stand. But Faudoa, surrounded by thousands of like-minded supporters, was optimistic Monday.

“As an organization, we know that we’re going to pass the Supreme Court and unfreeze DAPA,” she said. “We trust them.”