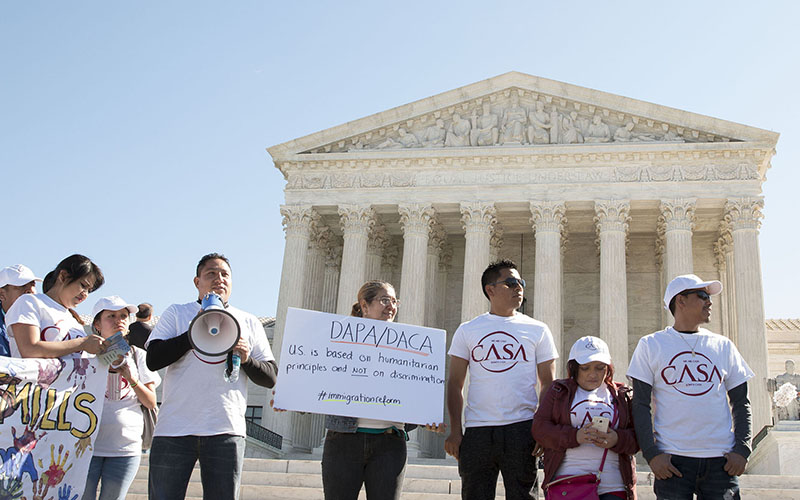 Protesters at the Supreme Court in March, after the House voted to file a brief in support of Texas’ challenge to the Obama administration’s deferred deportation policies. (Photo by Madison Alder/Cronkite News) 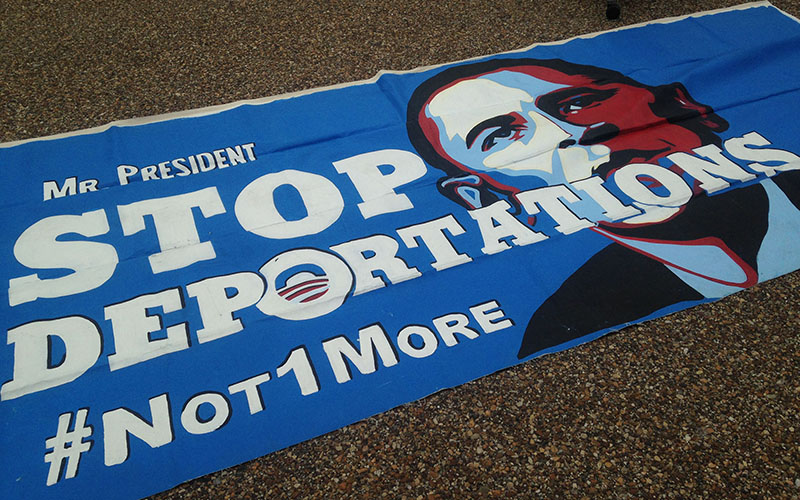 Despite his deferred deportation programs, President Barack Obama still has more deportations than any president, earning him the title “deporter in chief” from advocates. (Photo by Whitney Ogden/Cronkite News)

WASHINGTON – When the Supreme Court on Monday hears a Texas challenge to the Obama administration’s deferred deportation programs, the fates of 137,000 people in Arizona – and millions in the U.S. – will be riding on the outcome.

That is the estimated number of people who would have been helped by President Barack Obama’s plan to expand the Deferred Action for Childhood Arrivals program and enact a deferred deportation plan – DAPA – for parents of those who are U.S. citizens or lawful permanent residents.

But the plans were blocked by a federal judge almost as soon as they were announced two years ago, and they have been on hold ever since while the case – U.S. v. Texas – works its way through the courts.

“They are living in a total nightmare and a positive decision would be a sigh of relief,” said Petra Falcon, spokeswoman for Promise Arizona, of the families who could see a family member deported without the protection the administration had proposed.

DACA, announced in 2012, allowed people who were children when they were brought to this country illegally to apply for a deferral of any deportation, under certain conditions: They had to be in school or the military – or to have successfully finished one or the other – could not have criminal records and had to have lived in the U.S. continuously for at least five years, among other requirements.

Those who applied, paid a fee and were approved would be spared deportation for two years, during which time they could get a work authorization. The deferral was good for two years, but recipients could apply with Citizenship and Immigration Services for a renewal.

The Migration Policy Institute said that in the first two years after the program was announced, 23,000 people in Arizona applied for DACA out of an estimated 34,000 who could have met the criteria. Nationally, more than 681,000 applied out of the estimated 1.2 million who were eligible, the institute said.

Falcon remembered the joy of people in Arizona when they realized they met the critieria for DACA – but also the bittersweet realization that some family members would not be protected.

“While we welcome this relief, it’s not a permanent solution for people living in the United States with the fear of losing a family member through deportation,” she said.

The Obama administration moved to change that in November 2014 with plans to expand DACA and introduce a similar program for illegal immigrants who are parents of U.S. citizens or lawful permanent residents.

Those moves would have protected an estimated 5 million people nationally, about 137,000 of whom live in Arizona, according to the Migration Policy Institute. It said the bulk of those in Arizona, about 97,000, would have qualified under DAPA.

“The main thing that DAPA could offer is peace of mind,” said Randy Capps, director of research for U.S. programs at MPI.

But the programs were quickly challenged. Maricopa County Sheriff Joe Arpaio lost a challenge in federal court in the District of Columbia, but Texas was able to get a federal judge there to block the programs nationwide while it pursued the case in court.

That injunction was twice upheld by a panel of the 5th U.S. Circuit Court of Appeals, leading to the appeal to the Supreme Court, which agreed to hear the case. So far, no court has considered the merits of the case, only whether Texas and the other states were likely to succeed if their case was heard.

The administration has argued that immigration is a federal role and that the president and immigration agencies are within their authority to decided whom to deport, given the millions who are believed to be here illegally.

An earlier version of this story incorrectly stated the scope of DAPA in the second and 10th paragraphs. The Deferred Action for Parents of Americans and Lawful Permanent Residents would be open to people who are parents of a U.S. citizen or a lawful permanent resident of the U.S. The story here has been corrected. Clients who ran an earlier version of this story are asked to run the correction that can be found here.

“The court of appeals’ judgment enjoins nationwide a federal policy of great importance to federal law enforcement, to many states and to millions of families with longstanding and close connections to this country,” the government said in its brief to the Supreme Court. “A twice-divided court of appeals should not have the last word on whether that policy can be implemented.”

But lawyers for Texas disagreed, saying the case was about executive overreach and circumventing Congress.

“This case is about an unprecedented, sweeping assertion of executive power. This case is not about the wisdom of particular immigration policies; legislators have disagreed on whether immigration statutes should be amended,” Texas argued in its brief to the Supreme Court. “But when Congress has established certain conduct as unlawful, the separation of powers does not permit the executive to unilaterally declare that conduct lawful.”

Calls seeking comment from Arpaio and Arizona Attorney General Mark Brnovich, both of whom have sided with Texas in the case, were not immediately returned Friday.

Falcon, who plans to be at the court Monday, said a ruling in favor of the administration would bring “immediate relief” to families who have been left in limbo, allowing some to get a drivers license, work and go to school.

Capps agreed that DACA and DAPA, if implemented, could offer relief to families that “live with the knowledge that they could be targeted.”

But he also noted that “the federal government can only deport so many people at a time.”

“If DAPA is not implemented, parents are unlikely to be deported,” he said. “But that fear will be more acute in Arizona where there have been more deportations.”