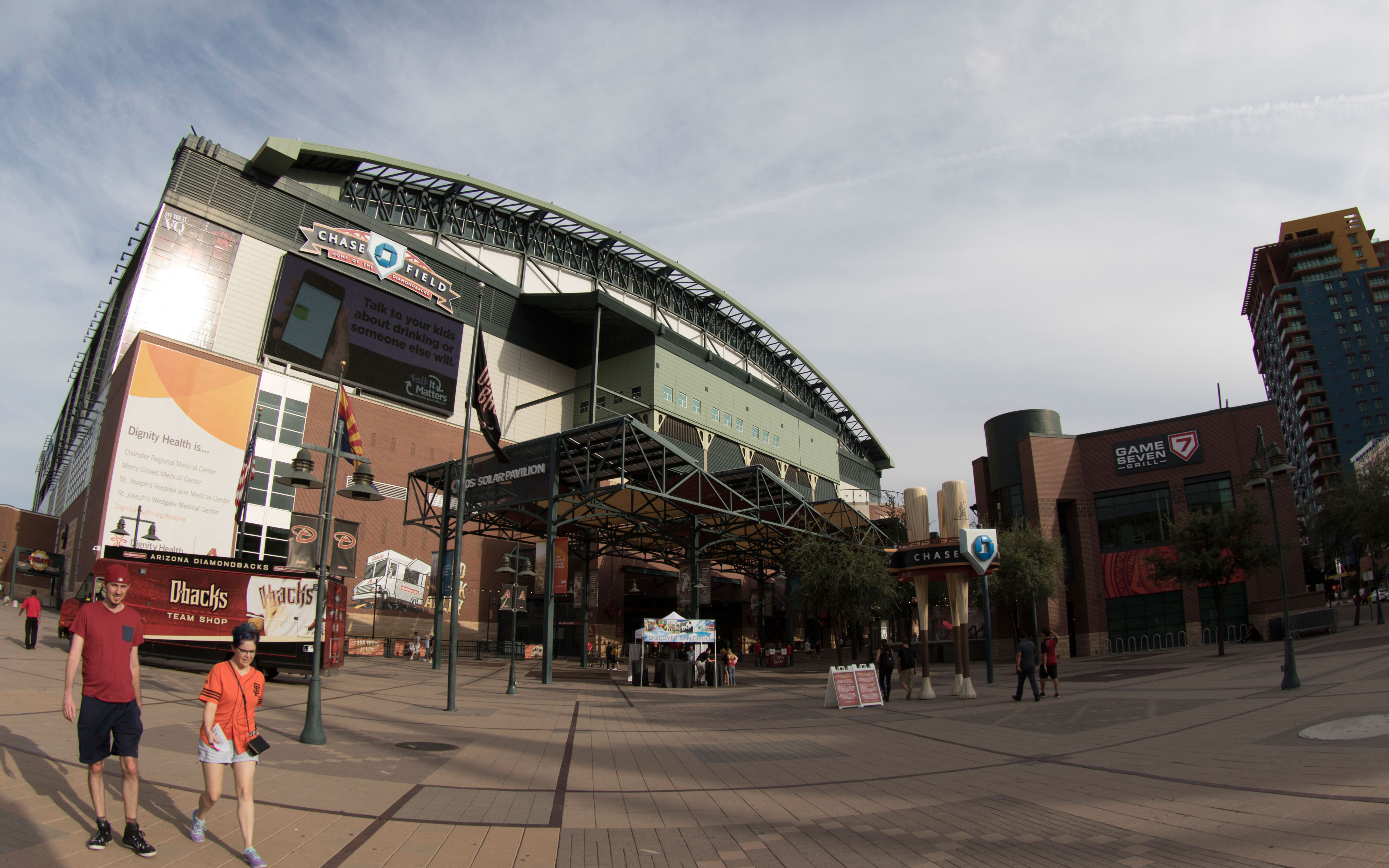 The Diamondbacks has asked Maricopa County for permission to explore options that may include leaving Chase Field. The county has denied this request. (Photo by Jacob Stanek/Cronkite News)

Maricopa County said the Diamondbacks “have almost total responsibility for the maintenance, operation, and repair of Chase Field,” and the agreements between the team and the county “do not establish any contractual requirement to provide the Team a ‘state-of-the-art’ stadium,” according to two letters provided to Cronkite News by the county.

An April 11 letter from County Board of Supervisors Chairman Clint Hickman to Diamondbacks President and CEO Derrick Hall claims the Diamondbacks are contractually responsible for more than three quarters of $187 million of repairs and improvements to Chase Field.

The letter is the county’s latest salvo in the ongoing dispute over the future of the team and Chase Field that became public in March. The team has asked the county for permission to explore options that may include leaving Chase Field. The county has denied this request.

According to Maricopa County Stadium District Director Daren Frank, the $187 million figure the Diamondbacks have pointed to was established in a joint Facilities Assessment Report completed in 2013 by a four-person steering committee made up of two team representatives and two district representatives, one of whom is Frank.

In a summary of the related use agreements between the team and the county included with Hickman’s letter, the county states “almost all operating, maintenance and repair costs of the Facility … are the responsibility of the Real Estate Manager and the Facility Manager, both Team affiliates.” In addition, the team’s rent payments “are to be the primary funding source for most Capital Repairs at the Facility.”

The team has claimed the Maricopa County Stadium District is unable or unwilling to pay for these repairs and improvements. Frank said the district does not dispute the repairs, but it does dispute the amount for which joint accounts shared by the county and the team are responsible.

“For them saying it’s not enough to cover the $187 (million), it would never be able to,” Frank told Cronkite News. “But, it wasn’t designed to.”

In a statement sent Thursday afternoon, the team said, “The letter we received from the County Stadium District is another formal declaration of its unwillingness to fulfill a landlord’s obligation and no intention to address the needs of the stadium that the Arizona Diamondbacks proudly continue to invest in and maintain. We consider ourselves partners with the taxpayers who helped make the original construction possible, as we both have made similar substantial investments in the facility. The County Stadium District continues to show a lack of respect and responsibility to that partnership.

“This represents a continuation of four years of disingenuous dialogue; the same absence of accountability that brought us to this unfortunate position. The team will continue to evaluate its options to protect the future of Chase Field.”

The team’s argument focuses on its claim that Chase Field is no longer a “state-of-the-art” facility, and that it was the district’s obligation to fund stadium upgrades.

In a January 12 letter that the county said it did not receive until March 24, Hall quoted the district’s financial reports from every year since 2005: “…funding financial reserves for future capital needs of the stadium and capital improvements to remain a state-of-the-art facility to accommodate future world class national and international sports or championship events.” The team also claimed that the county has fallen short on its requirements for funding improvements.

“There is no clause in our agreements that say ‘state of the art,” Frank said. “They pulled that from our financial statements, which is part of our mission statement, but we are not contractually bound to it.”

In that same 15-page letter, Hall highlights the 2013 Facilities Assessment Report that estimated what Hall referred to as “maintenance and repair costs” to be $187 million. He went on to say in the letter that the number “does not include most needs to upgrade the aging stadium to a ‘state-of-the-art facility.’ ”

However, this week’s letter from the Stadium District maintains that not only is there no place in the 1996 Facility Use Agreement between the parties where the words “state of the art” appear, but that the $187 million number the Diamondbacks have declared to be an obligation of the county could be broken into three parts: “$55 million is part of the annual Team obligation for the cost of operation, repair and maintenance of the stadium throughout the remaining term” of the agreement, “approximately $90 million is for multiple cycles of continuing updates” that are also a “team responsibility to the extent the Team chooses to make those upgrades” and $35 million for structural steel and concrete repairs that the district considers its responsibility and plans to fund.

Frank said that, though the team has, as the letter states, “mischaracterized” upgrades to the stadium as obligations of the district, the district has never refused the team a funding request to make an improvement of this nature to the stadium.

“We have complied with all those requests,” Frank said, “including those fan experience items that we really don’t have responsibility to pay for. But the board of directors of the Stadium District has approved them on a case-by-case basis, and when we do those, we do a letter agreement for just that project that says we don’t have to do it anymore. It basically says, ‘We’re doing this, we decided to do this, it doesn’t put us on the hook for doing it again.’”

Frank told Cronkite News the Diamondbacks and the Stadium District maintain a joint account to fund repairs and maintenance. He said there have only been three requests to utilize funds from this account that have been denied in the 20 years since the Facility Management Agreement was signed.

Two of those occurrences, Frank said, were instances in which the team made a request too late in the procurement cycle to be responded to in time. Both of those requests, Frank said, occurred shortly before Chase Field hosted the MLB All-Star Game in 2011.

According to the county, the other refused request occurred earlier this year. And it was the Diamondbacks who refused the expenditure, he said.

“It’s happened this year for the first time,” Frank said. “It was a request that we put in to do the next year’s worth of work. And they’ve chosen not to.”

That expenditure was the subject of a second letter obtained by Cronkite News, which was dated April 12. In the letter, the district expressed concern that the team had given notice that, “for the first time,” the team had “declined to approve proceeding with the next stage of the concrete and steel repair at Chase Field that has been planned for the 2016 off-season.”

The letter continued to assert the importance of these repairs, which include replacing failing expansion joints and applying waterproof coating.

“It’s not at the point that it’s a life-safety issue,” Frank said. “But it’s never cheaper to do it than right now. If we wait it could double or triple in cost.”

The Stadium District provided Cronkite News with a copy of an email dated March 21 addressed to Frank and sent from Senior Vice President and General Counsel for the Diamondbacks Nona Lee. The email stated the team felt “it is in everyone’s best interest to postpone these repairs for at least one year.”

However, when reached for comment, the Diamondbacks said that they had not delayed any work.

Hickman stated in his letter that “The District has not breached any provisions or obligations under the agreements,” and even if it had, the agreement “makes alternative dispute resolution the Team’s exclusive means to resolve such a dispute, not litigation.” He ended saying “we welcome any efforts with the aim of making Chase Field an attractive place for the Team to play, now, and beyond the current term” of the agreement.