The inventors of Fire Armor with their work outside the White House are, from left, Varun Vallabhaneni, 17, Savannah Cofer, 18, Matthew Sun, 17, and Valerie Chen, 18. (Photo by Madison Alder/Cronkite News) 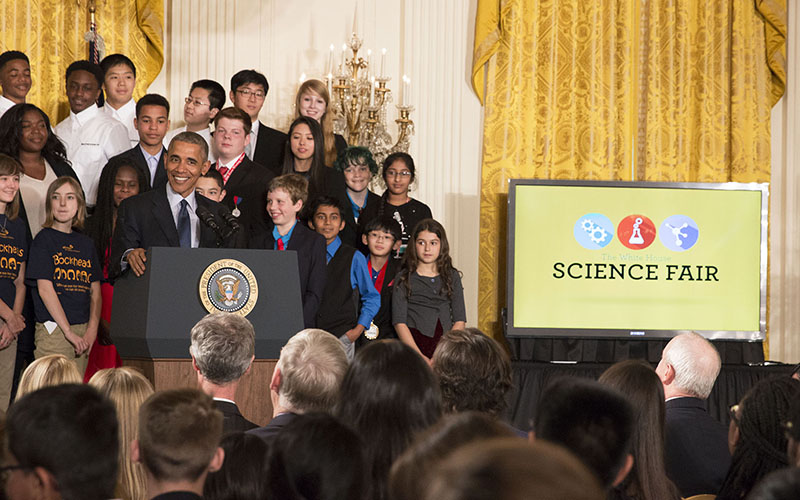 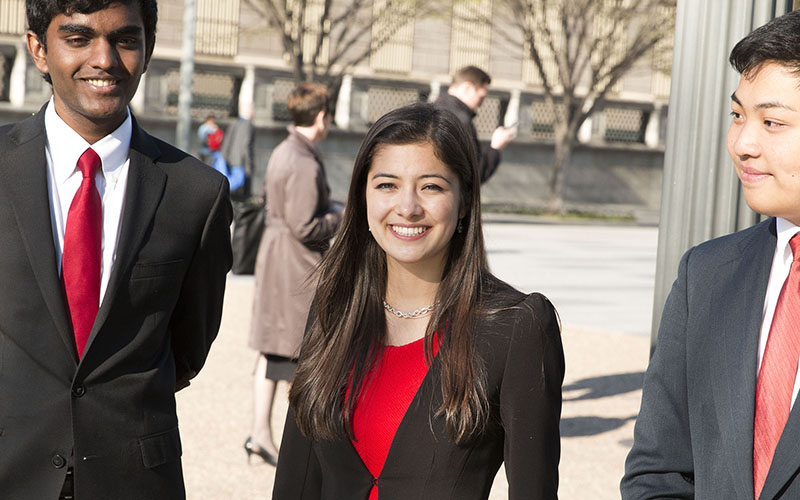 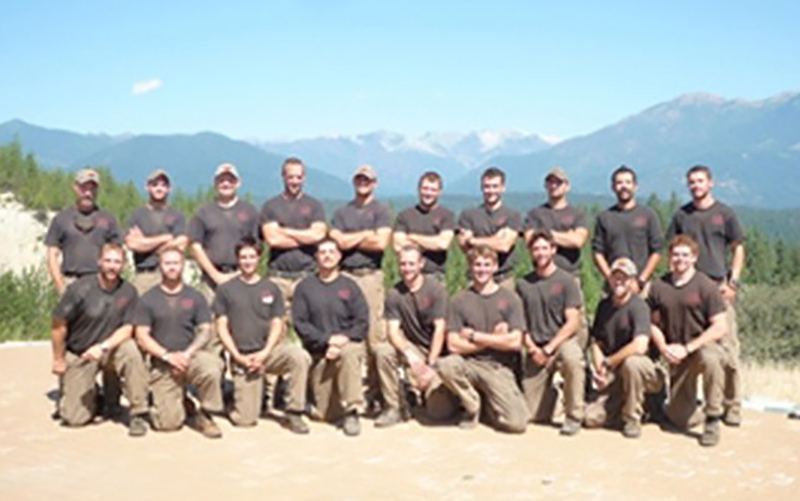 A photo of some members of the Granite Mountain Hotshots Crew taken in 2013, before 19 of their number died while fighting the Yarnell Wildfire in Arizona. (Photo courtesy City of Prescott)

WASHINGTON – Ohio native Savannah Cofer was shocked by the smoke from all the wildfires that were burning in Arizona while she was on a family trip to the Grand Canyon in 2013.

That shock turned to action when Cofer learned that one of those fires took the lives of 19 Granite Mountain Hotshots while they were battling the Yarnell wildfire that summer.

“It opened my eyes to the fact that there was a community need,” said Cofer, who spent a year with three other high school students to find what they hope is a life-saving solution – a fabric that can withstand extremely high temperatures for minutes at a time.

Their invention of FireArmor earned the four a trip to the White House Science Fair this week, where President Barack Obama praised more than 100 “young thinkers and makers” there who don’t accept the answer “that’s just the way things are.”

“For me personally, it just irritates me when there are things that I think could be made better that have stayed the same for decades,” said Matthew Sun, 17, who worked with Cofer, 18, Varun Vallabhaneni, 17, and Valerie Chen, 18.

The team met three years ago at a national middle school science competition and quickly became friends. Cofer and Vallabhaneni, from Gahanna, Ohio, had created a device to combat tremors in people’s hands while Chen and Sun, from Centreville, Virginia, had developed a computerized system to prevent texting and driving.

“Even though we were competitors,” Sun said, “we connected on a friendship level really well and said, ‘Hey we work together really well, we should team up and do projects together.'”

Last year, they decided to join forces and collaborate on the project that eventually led to FireArmor. They worked remotely, messaging and video conferencing their ideas and findings, while each pair also worked in a commercial laboratory where they were able to do hands-on tests of their fabric.

That work led to FireArmor, an endothermic fabric that they say would protect firefighters in temperatures over 1,000 degrees Celsius or for up to five minutes in a flash-fire situation. Current materials work up to 300 Celsius for only six seconds, the team said.

At the White House, their award-winning project was flanked by two seemingly identical firefighters jackets, to show FireArmor made little visible difference to the bulk of a firefighter’s gear. The team is working on getting a patent and trademark for their endothermic fabric that Cofer said “works a lot like an instant ice pack.”

“So when it (FireArmor) is exposed to a certain temperature it actually absorbs heat from its environment,” she said.

When Cofer started to brainstorm solutions, she quickly began to focus on the limitations of a firefighter’s protective suit or “turnout gear” and what could be done to improve its durability.

“She thought about what makes things cold and started to think about all of her many, many years playing soccer and, when you’re injured, those wonderful instant ice packs that generate cold in a warm situation almost immediately,” said her father, Cameron Cofer, who is also the team’s coach.

He said it was the ice packs that led them to start wondering whether the same chemistry could be applied to fibers in fabrics.

The collaboration was a great example of how networking at an event can turn into “meeting people with the same passions as you,” Cofer said.

Among those passions, Obama said Wednesday, is the commitment to serve.

“They are not afraid to try things and ask tough questions,” he said of the young scientists and inventors. “And above all, what we’ve seen today is that they feel an obligation to use their gifts to do something not just for themselves but for other people as well.”