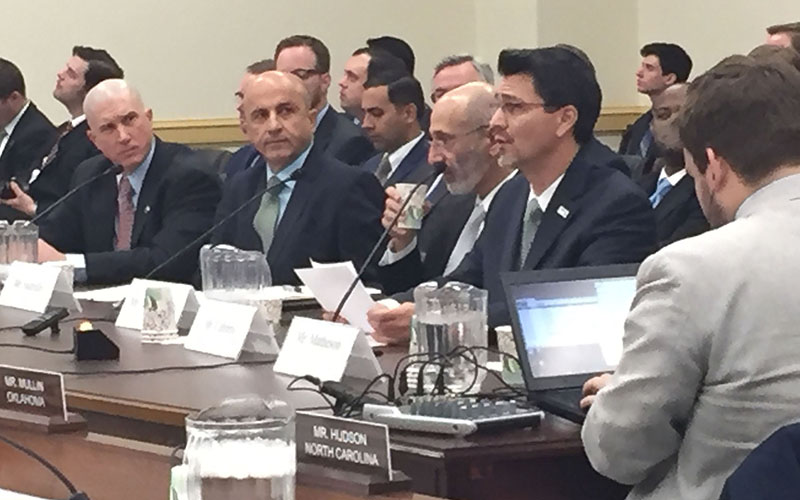 WASHINGTON – The director of the Arizona Department of Environmental Quality told lawmakers Thursday that new air-quality standards will burden rural communities, like many in Arizona, by holding “rural counties accountable for pollution they did not create.”

Misael Cabrera was one of several state and local environmental officials testifying on a bill that would give states greater flexibility in setting ozone standards, a bill that was alternately called “polarizing” and “a step in right direction.”

“This practical bill simply ensures that air quality continues to improve while avoiding unnecessary harm to state and local governments and to job-creating businesses,” said Rep. Ed Whitfield, R-Kentucky, one of the sponsors of the bill.

Out of the ozone zone

Of 10 Arizona counties with ozone-level monitors, only one might have met the EPA’s 2015 standard of 70 parts per billion, according to a House committee. The counties and 2012-14 ozone measures:

Whitfield said the bill is needed because the Environmental Protection Agency set new, tougher ozone standards and then set an “arbitrary” compliance deadline that “needs to be revised.”

But Delaware Director of Air Quality Ali Mirzakhalili said the bill “weakens the existing Clean Air Act” and threatens public health while delaying “deadlines for implementation of the 2015 ozone standard by up to eight years.”

“This action would not only provide citizens with a false sense of ‘health’ security, but also unnecessarily subjects them to serious health and welfare problems, including premature mortality,” Mirzakhalili said in his testimony before the House Energy and Commerce Committee.

Both sides at the hearing agreed, however, that ground-level ozone regulations imposed by the EPA in 2015 are in need of revision.

The revisions to the Clean Air Act lowered the standard for ozone levels from the 2008 level of 75 parts per billion to a new level of 70 ppb in 2015.

Critics said the change was unnecessary – noting that overall ozone levels had dropped by 30 percent since 1980 – as well as confusing for local governments, with the old and new standards both in place. It left governments in the position of “chasing the wrong rabbit,” in the words of one witness.

A report by the committee staff estimated that 241 counties that were compliant with the old standards could be noncompliant under the new ones. States were given until Oct. 1, 2016, to determine which counties were noncompliant, triggering tougher air quality standards.

The committee report said counties would continue to be noncompliant – even if actual ozone standards improved – until EPA approves a maintenance plan, “which can take years.”

The bill, if passed, would give states until 2024 to finalize a plan to meet the EPA’s 2015 standards.

Bryan Shaw, chairman of the Texas Commission on Environmental Quality, called it a “step in the right direction.”

“It requires the EPA to spend more time studying and reviewing scientific literature and other factors before implementing new standards,” Shaw said.

But Mirzakhalili cautioned that any changes to the need to be “deliberate and thoughtful, and ensure that the fundamental tenets of the legislation – protection of public health and welfare – remain intact.” The bill does not do that, he said.

Cabrera said something has to be done. He said that Yuma, a largely agricultural county that is in the shadow of pollution from Mexico and California, is all but helpless to come into compliance under the current rules.

Cabrera said that without some changes, “there will be requirements can keep businesses from opening up.”

“It means requirements on agriculture that keeps agriculture less efficient,” Cabrera went on to say. “And what it means is that we’re imposing restrictions on American business for pollution that’s coming from international sources.”