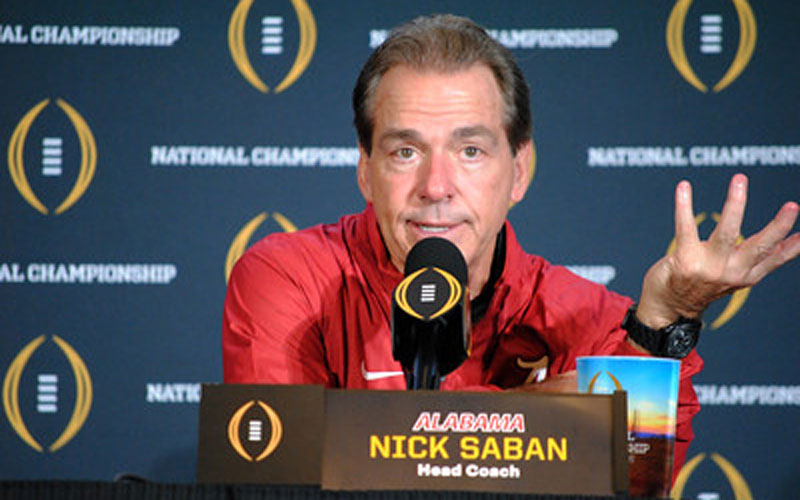 The College Football Playoff meant $273 million in business for the Valley.
(Photo by Bill Slane/Cronkite News)

Second-ranked Alabama defeated top-ranked Clemson 45-40 at University of Phoenix Stadium on Jan. 11 in a game that generated $273.6 million in revenue from out-of-state visitors. It was nearly $70 million more than the previous high mark for a college football championship game in the state, the 2011 BCS National Championship.

That figure and its context were discussed by members of the Arizona Organizing Committee and government officials during a press conference at the Phoenix Convention Center Wednesday.

“These numbers are spectacular news and they further underscore our ability to have mega-events,” said Arizona Gov. Doug Ducey. “When it comes to hosting high-profile events, nobody does it better than Arizona.”

Ducey emphasized the value of Arizona establishing itself as a premier location for major national events, particularly in the sports world. Last year’s Super Bowl and the CFP National Championship gave the state a showcase to visitors from around the country, Ducey said.

“The economic impact is incredible, but equally important is the lasting impression we make on all who visit the Valley of the Sun,” Ducey said.

In terms of sheer numbers, the events surrounding Super Bowl XLIX last year were still a much greater economic force than the CFP National Championship. The Super Bowl, which was also played at University of Phoenix Stadium, generated $719 million in total economic impact, according to the W.P. Carey School.

However, there are a number of factors that lead to Super Bowls having a greater economic impact than college football’s championship event. In addition to a longer period for fan events around the 2015 Super Bowl, the demographics of people attending were different, according to Anthony Evans of the Seidman Research Institute at the W.P. Carey School.

“You had an entourage of both the rich and famous descending on the Valley for the Super Bowl,” Evans said. “I would imagine that the majority of the visitors for the college football (playoff) were more traditional fans.”

Still, impressions were made — and not just through the CFP National Championship game itself, but through the events surrounding it, according to Ducey. The weekend leading up to the game included events such as interactive games and youth sports clinics at the Phoenix Convention Center and outdoor concerts on Washington Street.

“This was so much more than a game,” Ducey said. “It was an experience, and it was an epic one at that.”

By hosting different events in locations across the Phoenix metro area, the organizing committee looked to spread economic benefits to municipalities throughout the Valley. The game itself was played in Glendale, but the teams and marching bands stayed in hotels located in Scottsdale and Mesa. Fan events were centered in downtown Phoenix.

Playoff Fan Central’s success brought an estimated 200,000 people to Phoenix, even though the game itself was played miles away. This allowed downtown to play a leading role in the CFP National Championship despite not having a football stadium, according to Phoenix Mayor Greg Stanton.

“Governor Ducey, you’ll be happy to know this is what teamwork looks like. This is what regionalism looks like,” Stanton said. “We’re blessed to be able to host the mega-parties and concerts in downtown Phoenix. Mayor (Jerry) Weiers, you and your team in Glendale do a great job hosting the game.”

Phoenix also served as the transit hub for visitors flying in for the CFP National Championship, leading to nearly 3.5 million passengers coming and going through Phoenix Sky Harbor International Airport in the month of January. That tally is even higher than in January 2015, when Arizona hosted the Super Bowl, according to an Arizona Organizing Committee press release.

Through the 2015 Super Bowl and 2016 CFP National Championship, downtown Phoenix has been able to display its evolution to visitors from around the nation, Stanton said.

“These events are exactly what we want in downtown Phoenix,” Stanton said. “They invite new audiences to experience downtown’s positive growth and changes — and besides that, it’s a heck of a lot of fun.”

In addition to the revenue and publicity generated by the number of visitors at the CFP National Championship, there’s potential for future revenue from a specific group of attendees — CEOs invited to forums hosted by the Arizona Commerce Association.

Four of the 24 companies represented at CEO forums have announced their intention to bring projects to Arizona, according to Greg Linaman of the Arizona Commerce Authority.

“Bottom line: Arizona has become a sports Mecca,” Linaman said. “The series of events that we’re experiencing is just not happening in other places. It’s a real critical competitive advantage for our state. We have to work together to continue to take advantage of it.”