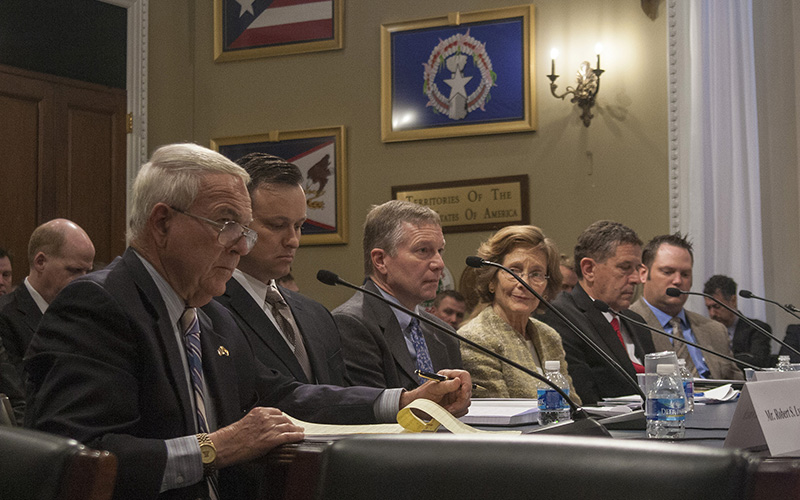 Robert Lynch of Phoenix, left, was one of the officials testifying to a House committee on new federal clean-water rules. Also testifying were Jan Goldman-Carter and Lawrence E. Martin, who is second from right. (Photo by Sara Weber/Cronkite News)

WASHINGTON – Officials from Western states Wednesday blasted what they called “overreaching” and “job-killing” clean-water regulations proposed by the Environmental Protection Agency but currently on hold as the result of a court challenge.

Phoenix attorney Robert Lynch was among those who told a House Natural Resources subcommittee that the EPA’s “waters of the United States” rule, meant to clarify regulations, actually “muddies the water.”

“Our institutions, our own states, have to work together,” Lynch said. “If they fight each other over who’s in charge, we won’t get there … there’s no way to fit a one-size-fits-all program into Western water law.”

That was echoed by Rep. Paul Gosar, R-Prescott, who said in his opening statement that the EPA’s proposals are “a buzz-kill to local empowerment and water development.”

Supporters of the rule conceded that there may be problems, but they said the solution is to fix those problems, not throw out the entire rule.

The waters of the U.S. rule is “necessary and the best chance in a generation to clarify which waters are … protected by the 1972 Clean Water Act,” said Jan Goldman-Carter, director of wetlands and water resources at the National Wildlife Federation.

On its website, the EPA says the new rule “protects streams and wetlands that are scientifically shown to have the greatest impact on downstream water quality and form the foundation of our nation’s water resources.”

But critics have charged that the updated rule is an example of federal overreach that prevents farmers and landowners from maintaining their own property, claiming that the rules could be read to apply to puddles and dry washes.

A federal court put the rule on hold in October while opponents pursue a legal challenge to the rule.

Lawrence Martin, an attorney testifying on behalf of the National Water Resources Association, said the organization supports the goals of the Clean Water Act, but not the “additional burdens” that come with its regulations.

“Water is one of the most basic and vital elements,” Martin said. “Unnecessary regulation makes supplying the water we all depend on more difficult, and in some instances, can prevent the development or maintenance of vital water infrastructure.”

But a committee Democrat said the suggestion that the Clean Water Rule is a federal overreach “is bunk,” pushed by Republicans on the panel out to get the Obama administration.

“It seems that my Republican colleagues will just about attack anything the president poses,” said Rep. Jared Huffman, D-California. He called the hearing “a stronghand argument that the Obama administration is somehow bent upon a radical power-hungry quest to illegally assert authority over just about everybody’s water.”

Lynch agreed that there is more partisan tension over this issue than he has seen in a long time.

“I’ve been working with this for over half a century, and I’ve never seen this situation less friendly,” Lynch testified. “I don’t know what we’re going to do about it or how we’re going to get better. I hope that we will focus on transparency and partnership.”

But, tension or no, he said something needs to be done to clarify responsibilities in the handling of Western waters.

“Somebody’s gotta draw a line: This is your job, this is their job,” Lynch said.