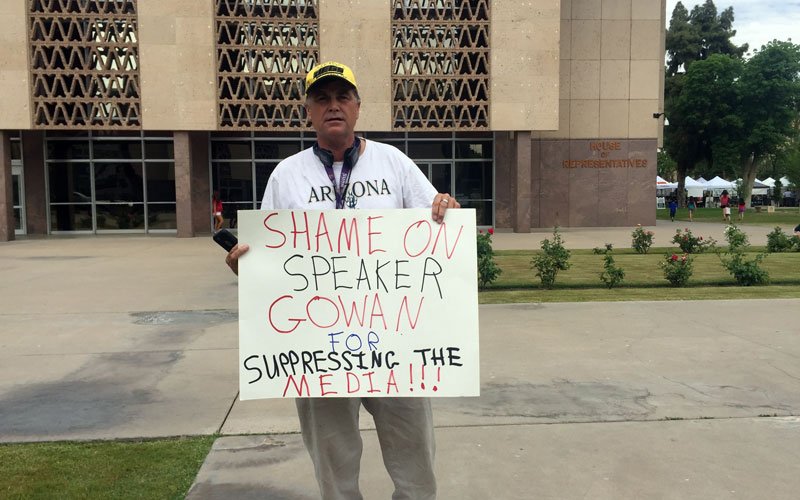 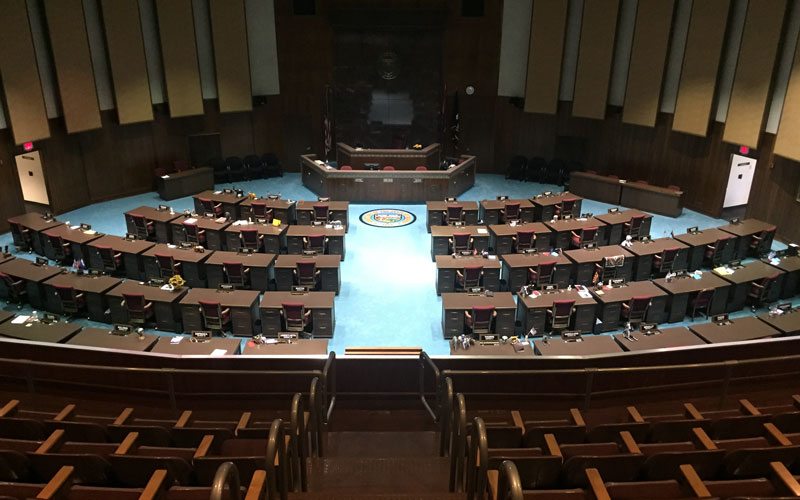 Legislative reporters, who usually sit at the front of the House floor, sat on the House gallery during Thursday’s session, in Phoenix on April 7, 2016. (Photo by Miguel Otárola/Cronkite News) 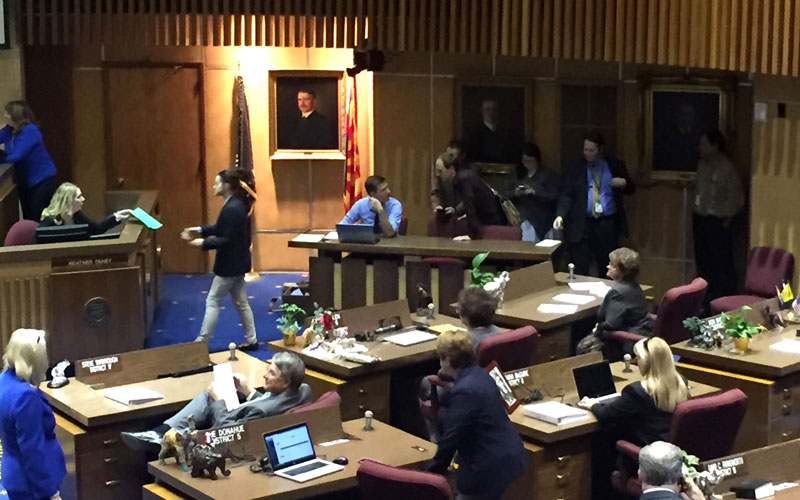 Legislative reporters stood as a larger-than-usual group behind their media tables in Thursday’s state Senate session in Phoenix, on April 7, 2016. (Photo by Miguel Otárola/Cronkite News)

The background checks are the result of “security concerns that arose earlier this week when protesters repeatedly disrupted an Elections Committee meeting and then disrupted floor proceedings,” according to a form sent to reporters.

Reporters believe the new security measures were introduced by Gowan to target a local reporter who has written stories putting him in an unfavorable light.

On Monday, the press corps reporters got a memo from Gowan, R-Sierra Vista, stating that reporters trying to access these non-public areas would have to fill out a form, Pitzl said. When the form arrived on Tuesday, reporters found it to be too extensive, asking for social security numbers and other personal information.

“They want me to give my permission so they can go to my former employers and my current employers and see what they have to say about me,” Pitzl said. “We’re just saying, ‘What does this have to do with anything?’”

After discussions between a Capitol press corps attorney and the House attorney, the form was revised. The new form, while requesting less information, came with new criteria regarding criminal backgrounds.

In particular, the document said there are exceptions to the criteria except if previous convictions concerned certain crimes, including trespassing. Hank Stephenson, a Capitol Times legislative reporter, has 2014 conviction of trespassing, according to the paper.

Press corps reporters believe Stephenson was unfairly singled out by this revision. In January, Stephenson wrote a story about Gowan traveling at the cost of the state. (Gowan later had to reimburse the House more than $12,000.)

Stephenson later tweeted that this was the third time Gowan tried to kick him out of a House session. According to his discussions with the House Sergeant-at-Arms, no press corps member filled out the revised form.

Pitzl said that instead of filling out a form that would “just exclude one guy,” the legislative reporters present went to the third floor gallery to report on the House session.

“I am pleased that the Capitol press corps is standing together on this. Because until we’re informed otherwise, it appears that this is an attempt to shut out one reporter who has done coverage that puts one public official in an unflattering light,” Pitzl said. “Well, we do that all the time.”

Reporter Justin Price, who was working at the House at the time on a story for the Arizona Center for Investigative Reporting, found Thursday’s House session to be bizarre.

Gowan during the House session said the new background check policy was implemented to secure the safety of House members, referring to the elections protests last week. The House spent much of the Thursday session debating media access, many siding with the press corps.

“Our protection here on this floor is of the utmost – it’s paramount to me as your speaker of the House,” Gowan said during the session. “I want to make sure you’re protected.”

David Bodney, a partner at law firm Ballard Spahr who is representing some of the media organizations involved, said he is working with the House to change the language of this new background check.

“We think the House really needs to establish, in minimum, a rational basis for the new policy, and to demonstrate that the policy they created is fair and non-discriminatory,” said Bodney, who is also president of the Endowment Board of the Walter Cronkite School of Journalism and Mass Communication.

He added that “there are ample signs to guessing this may be no coincidence,” and that Stephenson may have been targeted through the form.

Reporters found the timing of the new background checks to be strange, considering that the House is nearing the end of its legislative session. On top of that, Pitzl said that most of the Capitol press corps members have been there for years.

“I’ve been out here for 10 years. If they haven’t figured out my criminal tendencies or my ability to bring out violence, they never will,” she said, laughing.

During the Senate session Thursday afternoon, a larger-than-normal amount of legislative reporters headed to the Senate floor to their media tables at the front of the floor. Some sat while many stood, speaking with Senate members and documenting their floor access on their phones.

“I want to sincerely thank you, from the bottom of my heart, for the understanding that we all share here in the Senate, that the media is the most important protector of our freedoms here in this country that we have,” Farley said. “That’s why their freedoms are enshrined in the First Amendment of the Constitution.”