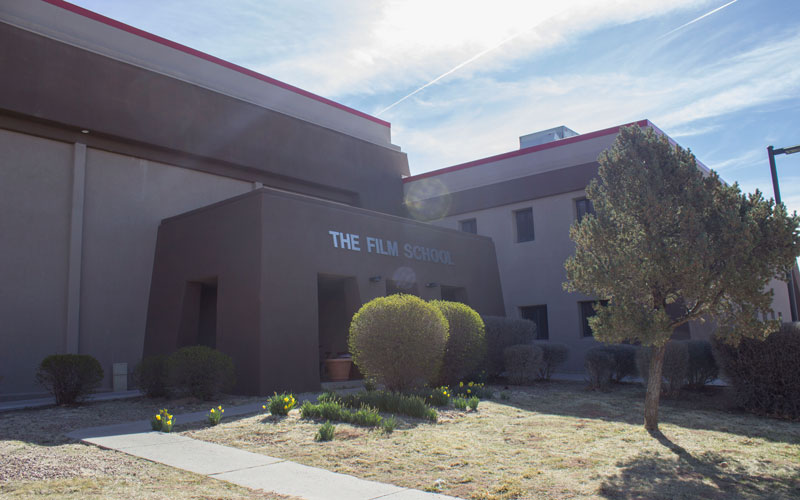 The film school at the Santa Fe University of Art and design hosts three stages where both student and professional pieces are filmed. (Photo by Molly Bilker/Cronkite News) 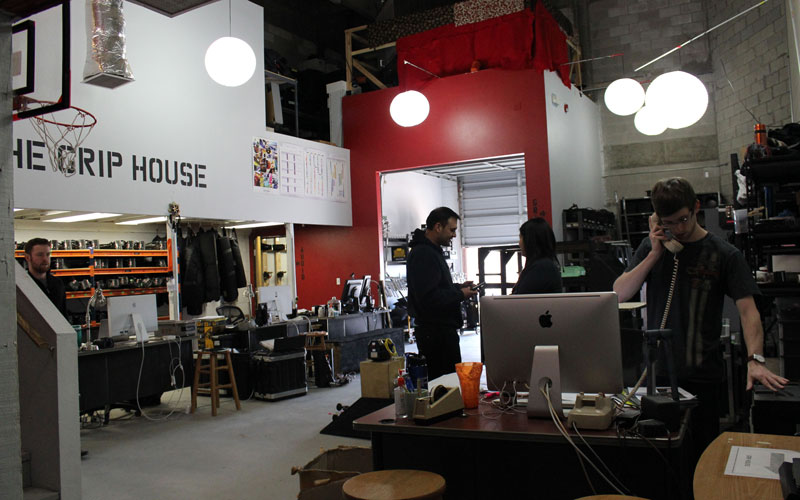 Students at the Santa Fe University of Art and Design film school rent equipment from the Grip House. (Photo by Molly Bilker/Cronkite News) 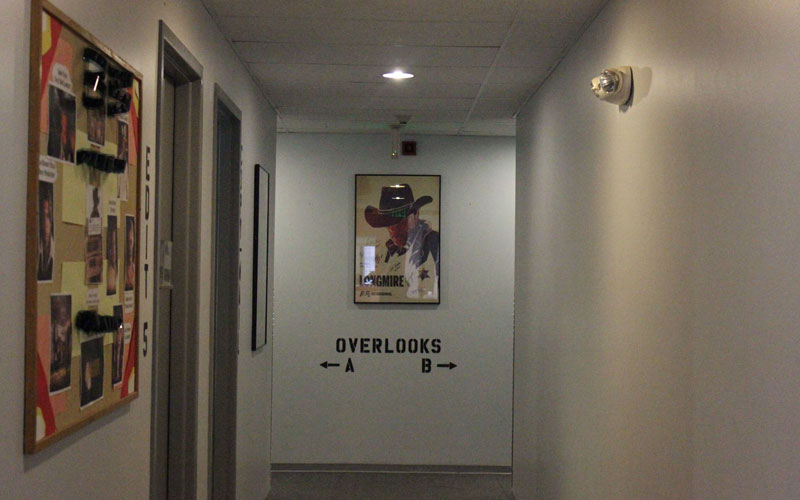 Overlooks A and B lead to windows overlooking sets for “Longmire,” which is filmed in New Mexico and at the Santa Fe University of Art and Design. (Photo by Molly Bilker/Cronkite News) 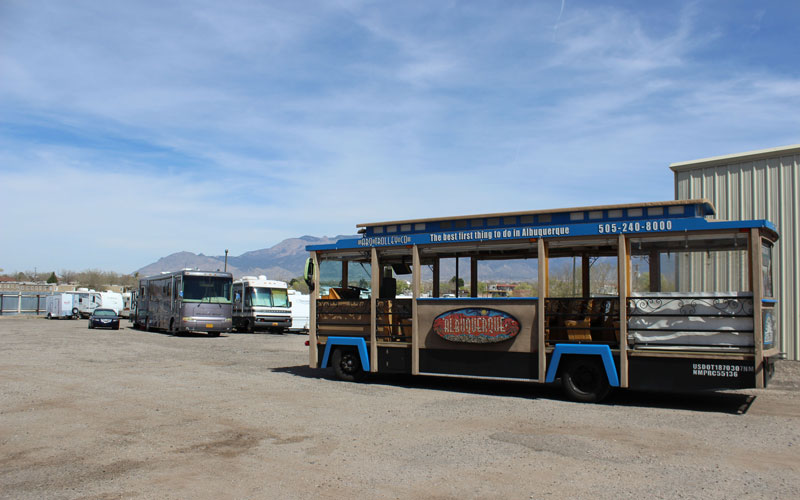 The Albuquerque trolley runs tours of film locations for the hit show “Breaking Bad.” The tours, known as BaD Tours, have brought many visitors into the city. (Photo by Molly Bilker/Cronkite News) 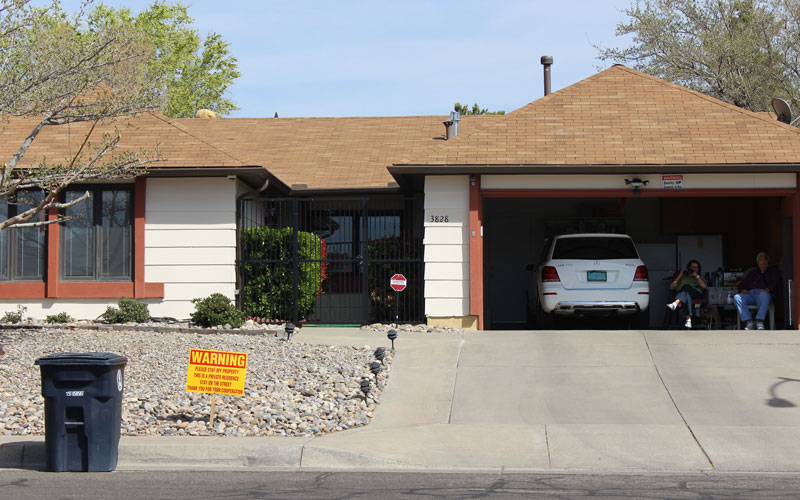 Residents now live in the house made famous by Walter White, main character of the hit show “Breaking Bad.” A sign on the law warns visitors to stay off the property. (Photo by Molly Bilker/Cronkite News)

SANTA FE, NM — The film “Sicario” opens on a static shot of a neighborhood somewhere in the desert. A team of police officers enter the scene from the right side, just after the words “Chandler, Arizona” fade from the screen.

This ostensible Arizona suburb where the scene is shot is actually a neighborhood called Tomé in Los Lunas, NM, about 25 miles south of Albuquerque. The state has become a hotbed for films featuring border issues, such as “Sicario” last year and “Frontera” in 2014, and Western, Middle Eastern and desert landscapes, such as Tina Fey’s “Whiskey Tango Foxtrot” released this year.

As the film industry continues to grow in states along the border, Arizona and its widely diverse landscapes remain off the table for large-scale productions. It’s the only state in the West that offers no tax incentives for film, so productions prefer to head to states like New Mexico, which offers a 25 to 30 percent cash refund on the amount spent on filming.

Without a tax incentive, Arizona could be losing hundreds of millions of dollars. Statistics from the New Mexico Film Office show $288 million spent directly into the state’s economy in fiscal year 2015. When Arizona did have an incentive from January 2006 to December 2010, the state saw about $110 million in spending through qualified expenditures, which include purchases such as hair and makeup products, insurance, catering invoices and more.

However, the success of the industry outside of large-scale movies can’t be ignored, said Phoenix Film Office Film Commissioner Phil Bradstock. Other forms of media, from webcasts to music videos to commercials, brought in $11 million in spending in Phoenix alone in fiscal year 2014-2015, according to numbers from the Phoenix Film Office.

“We always talk about a film incentive, and that puts the focus on the films, on the movies. But there’s this entire other industry that goes on out here,” Bradstock said. “There’s this whole other, much bigger slice of the pie out there, which is the commercials. It’s the still photo shoots. It’s the student films. … There’s a lot of different forms of multimedia.”

The fiscal and economic implications of a tax incentive

Tax incentives remain a high point of tension for Arizona’s film community, and the issue is political and economic. Film incentives mean the state gives a portion of the money production companies pay for qualified expenditures in the state back to them, which in 2010 was $9.3 million. Because the taxes on those expenditures only came out to $667,000, the state overall lost $8.6 million on those incentives.

Detractors consider the tax credits a subsidy for producers. Goldwater Institute senior economist Stephen Slivinski called the Arizona’s incentives “a classic tale of corporate welfare” in a statement published on the institute’s website in 2012.

“By Commerce Department estimates, the film and television productions receiving the credits hired 249 Arizona residents and an additional estimated 59 non-production jobs were counted as resulting from in-state spending by a production company,” Slivinski wrote. “That’s a subsidy of around $25,000 per job, if you make the generous assumption that each of these jobs wouldn’t have existed at all without the tax credit.”

That’s the primary reason that new film incentives haven’t been put in place for the last five years, though every year a bill has started in the legislature, often stalling in committees, Bradstock said.

Still, one-to-one measurement isn’t a full picture of the kind of impact large-scale film projects can have in an area, Bradstock said. Film productions coming to a state will publicize the area on a national level while buying from local businesses — that same year, 2010, Arizona saw $36.2 million in film production spending.

An example Bradstock emphasized of that kind of non-governmental economic impact was the movie “Piranha 3D,” which was filmed at Lake Havasu in 2009 and was not included in the financial impact report. A welding company in the area was intending to lay off employees, but the movie brought in welding work that kept those residents employed. That was before the tax incentive ended in 2010.

“We saw a fairly robust movie industry,” Bradstock said. “Once the incentive went away, the phones really stopped ringing when it comes to the major movies.”

Meanwhile, projects set in Arizona often end up filmed in New Mexico. The 2007 film “3:10 to Yuma,” set in 1800s Arizona, was filmed in Santa Fe and other New Mexico cities. “Spare Parts,” a 2015 movie based on Phoenix’s Carl Hayden High School robotics team, was filmed in Albuquerque.

Hank Rogerson, who played FBI Deputy Director Phil Coopers in “Sicario,” has lived in New Mexico since 2006 and works at the Santa Fe University of Art and Design film school. To him, the fact that scenes set in Arizona were filmed in New Mexico was of little importance.

“There’s not much difference, to me, as far as landscape goes. … The terrain was pretty much the same,” Rogerson said. “We had one scene that was outdoors, but I thought New Mexico substituted very well for Arizona.”

Actual film location matters less in the industry than being able to recreate the film’s setting, said New Mexico State Film Office Director Nick Maniatis. The focus, instead, is on the job creation and economic impact these film projects can bring.

Tourism, too, plays a role. Since the rise of “Breaking Bad,” a television show featuring a chemistry teacher turned meth producer that was set and filmed in Albuquerque, merchandise and advertising from the show can be seen throughout the city. Jesse Herron, who co-founded the Albuquerque Tourism & Sightseeing Factory (started as ABQ Trolley Co. in 2009) with Mike Silva, said they put together a trolley tour of Breaking Bad locations — known as the “BaD Tour” — in 2012 and sold out rapidly.

“Just about anywhere you can imagine in the Western world has been to Albuquerque for the tour on the trolley,” Herron said. “‘Breaking Bad’ kind of put us on this huge world platform, and it was like instant cool status.”

While Arizona may not see the tourism and economic impact of large productions, on a smaller scale the film community remains active. Television commercials will visit Arizona to film because the weather is reliable and stays warm through the winter months, allowing advertisers to shoot their spring offers early, Bradstock said. And for some, local film is a thriving industry due in part to the wide variety of landscapes the state offers.

“Right now, I think a problem we would have, like if we got a film tax incentive tomorrow, is that we wouldn’t be able to crew up all the jobs that would want to come into town,” Wilson said. “I am slammed with work, because we are definitely a location state.”

Meanwhile, the Phoenix Film Festival, which opens Thursday, brings the opportunity for local filmmakers to showcase their work. Of the U.S.-made films in the festival, 30 percent are from Arizona, said festival director Jason Carney.

“It does definitely show that film is happening here, and there is an industry and a commitment to independent film,” Carney said. “The films that are getting made, they’re definitely filmmakers that are struggling to make film their living, and that’s where it would be handy if we had some incentives so they could make some bigger films (and) work on other films that come into town.”

Despite the frustrations of not having a tax incentive and the tendency of large productions to pass over Arizona completely, Murray said he still remains hopeful for the film industry in the state.

“We have a great community. We have great actors. We have great crews. We have great locations,” Murray said. “The inertia of those good things generates a bit of business, and we’re going to survive. We will always have a film community, because Arizona is so unique and so beautiful.”