Arizona state Sen. Carlyle Begay, R-Ganado, said a state law letting parents use public money for private education drew 300 Native applications, but they could not use Bureau of Indian Education funds for the program. (Photo by Danika Worthington/Cronkite News) 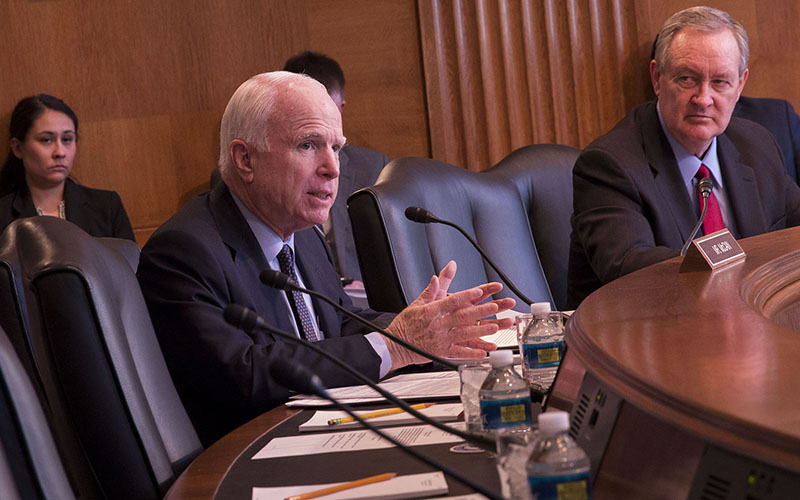 Sen. John McCain, R-Arizona, said he introduced the Native American Education Opportunity Act as an option to Bureau of Indian Education schools, where only about half the students ever graduate. (Photo by Danika Worthington/Cronkite News) 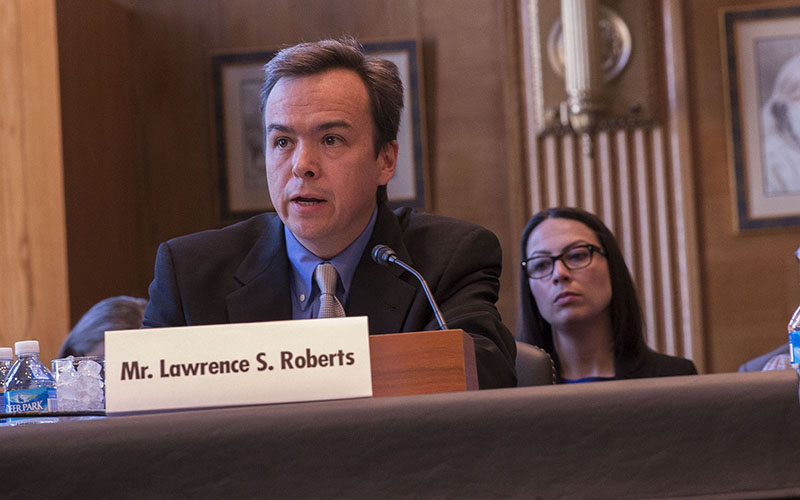 Acting Assistant Interior Secretary Lawrence Roberts said the school choice bill proposed by Sen. John McCain, R-Arizona, could have a negative effect on tribal schools, in part because they tend to be small and remote. (Photo by Danika Worthington/Cronkite News) 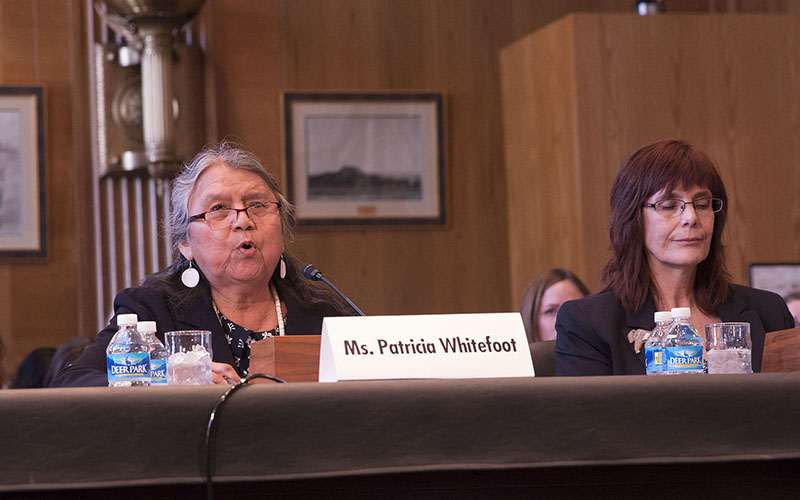 Patricia Whitefoot, president of the National Indian Education Association, said she was concerned with the implementation of the bill that would allow Bureau of Indian Education funds to be used for school choice. (Photo by Danika Worthington/Cronkite News)

WASHINGTON – Arizona state Sen. Carlyle Begay, R-Ganado, told a U.S. Senate committee Wednesday that a bill to give Native American students school choice is the “true essence of self-determination and self-empowerment” that tribes are seeking.

Begay was testifying in support of the bill by Sen. John McCain, R-Arizona, that would let families redirect Bureau of Indian Education funds – $15,000 per pupil – toward tuition at other public or private schools, as well as toward tutoring and online courses.

“If they are not getting the quality education in these schools that our children deserve, maybe it’s time to begin looking at something different,” Begay said after his testimony to the Senate Indian Affairs Committee.

But other witnesses said that while they agreed with the goals of the Native American Education Opportunity Act, they could not support a bill that would divert funds from already underfunded BIE schools.

Acting Assistant Interior Secretary Lawrence Roberts said McCain’s bill would burden small schools, noting that a
majority of BIE schools are run by tribes and are in communities with fewer than 10,000 people.

“Their costs are going to increase because a number of those small schools may have a third grade that has 20 kids,” Roberts said after the hearing. “You take five kids out of that school, they lose funding for that and they still need a third-grade teacher.”

He also said many of those schools are in locations far from private schools that would potentially serve Native students under McCain’s bill. Roberts said in his prepared testimony that Arizona has 291 private schools, but only six are on Indian reservations.

Patricia Whitefoot, president of the National Indian Education Association, said she was “concerned with the implication of this bill” and its potential negative effects on BIE infrastructure due to loss of funds, tribal sovereignty and academic performance.

McCain disagreed, saying it’s “very hard to allege that somehow the infrastructure would be harmed.”

But McCain recognized Roberts’ concerns about raising the costs at small schools.

“I understand your concern and I think a lot of us are also fiscal conservatives,” McCain said. “But when you have a 50 percent graduation rate, then we’re going to have to think outside the box.”

Last year, Begay sponsored a bill in the Arizona Legislature creating Empowerment Scholarship Accounts that allow state students to use public funding for school choice. The measure drew applications from 300 Native families within four weeks of its signing a year ago Wednesday – but those with children in BIE schools learned that the savings accounts do not apply to them.

Begay, who pushed McCain to introduce the congressional bill, said the Native American Education Opportunity Act is not the “entirety of the solution. It is simply just part of a solution.”

He said the bill does not force students into other schools, but rather gives them the choice. Begay said the opposition’s argument focuses on taking money away from schools.

“Since when is education about the systems of education rather than simply focusing on the families and the children in the first place?” he asked after the hearing.