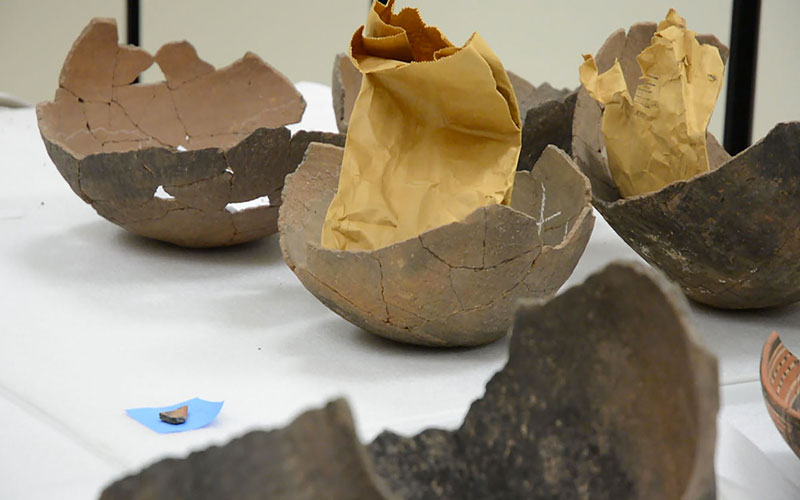 Pottery is often found in and around Native American graves. These items at the Arizona State Museum were not taken from a gravesite, but represent common utilitary ware. (Photo by Kristen Hwang/Cronkite News)

Researchers have spent decades inventorying the tens of thousands of relics and remains in government and museum hands, like these at the Arizona State Museum. (Photo by Kristen Hwang/Cronkite News)

WASHINGTON – A divided federal appeals court Wednesday reinstated a Navajo Nation lawsuit seeking to force the National Park Service to return more than 300 remains and relics that are “among the most sacred” of the tribe’s property.

A three-judge panel of the 9th U.S. Circuit Court of Appeals ruled that a lower court should not have dismissed the tribe’s suit on grounds of sovereign immunity, and ordered the case back to U.S. District Court for a new hearing.

But in a biting dissent, Judge Sandra Ikuta said the majority’s “completely backwards” ruling ignored the fact that the Hopi and Zuni tribes may also have claims to remains found in the area, and that the Navajo suit would “short-circuit Congress’s plan” to determine the right owners.

The Justice Department is “still in the process of reviewing the decision,” a spokesman said Wednesday, but an attorney for the Navajo Nation was “very pleased” with ruling.

The 190 Native American Graves Protection and Repatriation Act, or NAGPRA states, in part:

“Each Federal agency and each museum which has possession or control over holdings or collections of Native American human remains and associated funerary objects shall compile an inventory of such items and, to the extent possible based on information possessed by such museum or Federal agency, identify the geographical and cultural affiliation of such item.”

“It’s a great victory for the sovereignty of the Navajo Nation and its deeply held cultural values,” said Gregory Kelly, one of the attorneys who represented the tribe.

Officials with the Hopi and Zuni tribes did not respond to requests for comment Wednesday.

The case involves 303 items – human remains and funerary objects – most of which were recovered in the Canyon de Chelly in 1931, the same year the area was designated a national monument. The Navajo Nation retained title to the land, but the federal government was tasked with the “care, maintenance, preservation and restoration of the prehistoric ruins, or other features of scientific or historical interest” of the area.

Most of the items wound up at the Western Archaeology Center in Tucson.

The court said 297 of the items were removed without tribal consent while the remaining six were removed with Navajo approval in the 1980s – after the 1979 passage of the Archaeological Resources Protection Act, which created permit regulations for excavating and removing relics. It said a tribe must consent to nonmembers removing artifacts, and stipulates that any objects removed still belong to that tribe.

The law took another step in 1990 with passage of the Native American Graves Protection and Repatriation Act. It required that museums and federal agencies inventory their collections of Native American objects or human remains to determine “any tribes likely to be geographically or culturally affiliated with the items,” and to return those items to the tribes as quickly as possible.

The Park Service was investigating the 303 items in June 1996, when the Navajo said they were rightful owners of the relics because they came from the tribe-controlled Canyon de Chelly. The tribe demanded a return of the items, saying tribal custom holds that disturbing graves or funerary objects can lead to illness, crop damage, bad weather and other calamities.

For museums, sifting decades of artifacts is slow, but vital, work

A federal district judge threw out the case in 2013, saying the government enjoyed sovereign immunity from being sued until it had completed the administrative process. That sparked the Navajo appeal decided Wednesday.

But the circuit court said the Park Service had taken a “final agency action” when it made the decision to inventory the remains under NAGPRA, making it subject to being sued. Furthermore, the court said, the government’s argument that the Navajo were seeking return of the remains under the rules of NAGPRA was flawed.

“In fact, the Navajo Nation claims the NAGPRA does not apply at all because the Navajo Nation, not the Park Service, has the right to immediately possess and control the remains and objects” found in Canyon de Chelly, Judge Mary Schroeder wrote for the court.

But Ikuta’s dissent noted that the Navajos are “relative newcomers” to the canyon, arriving around 1700, while the Hopi and Zuni were descendants of tribes that had lived there for centuries before. The Navajo suit is rushing the Park Service, she said.

“In sum, the Park Service is making a good faith effort to comply with federal law,” Ikuta said. “The majority’s strained attempt to find a ‘final agency action’ … has no support in the record or in our precedent.”