“Road Kill” Bill Robertson, 60, laughs while having a conversation on Saturday, Mar. 26, 2016, in Bisbee, Arizona. (Photo by Courtney Pedroza/Special for Cronkite News) 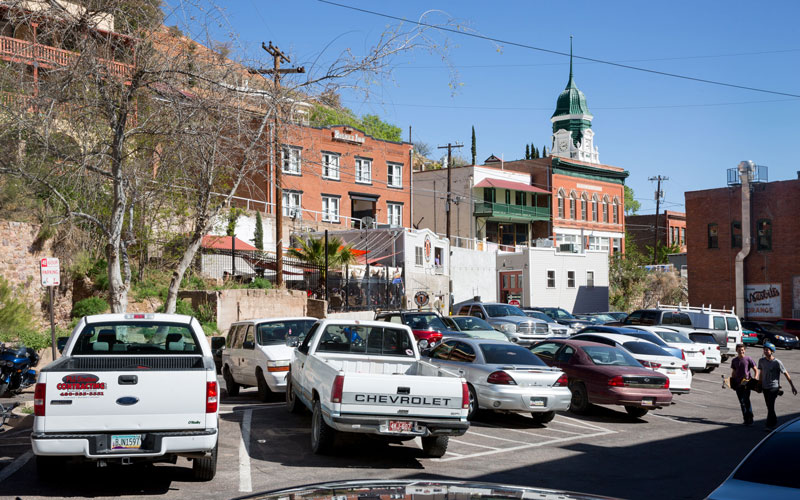 Bisbee feels different from many typical Arizona towns, set on steep hills out of the desert environment. (Photo by Courtney Pedroza/Special for Cronkite News) 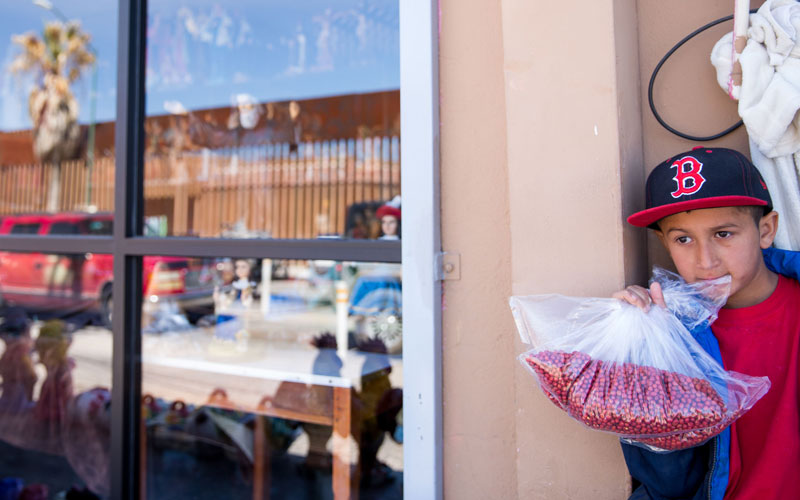 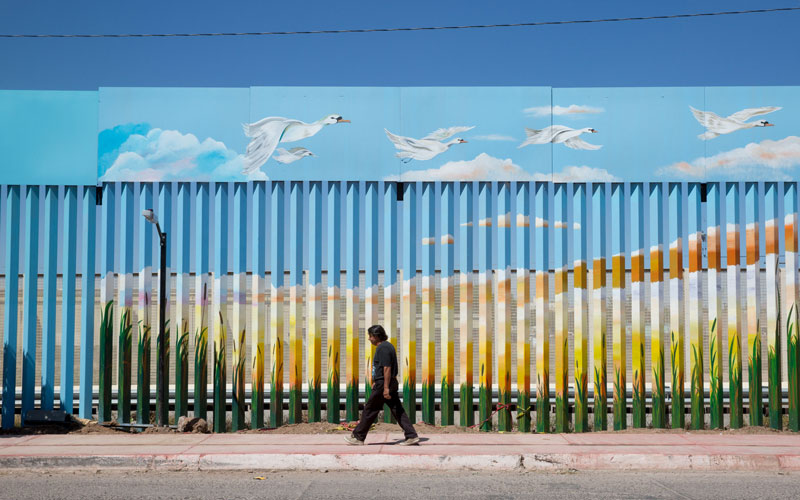 A man walks past the painted border fence in Agua Prieta, Mexico. Residents of Agua Prieta and Douglas say they feel there’s a good relationship between the two cities. (Photo by Courtney Pedroza/Special for Cronkite News) 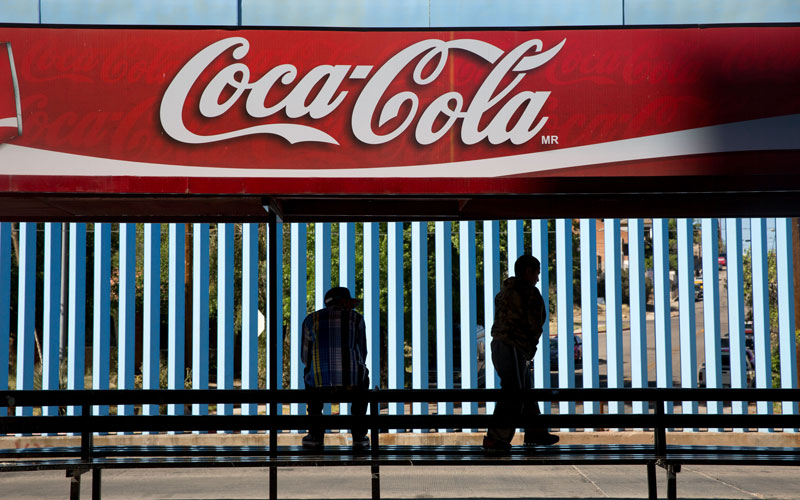 A man and boy wait for the bus in front of the border wall in Nogales, Sonora. (Photo by Courtney Pedroza/Special for Cronkite News) 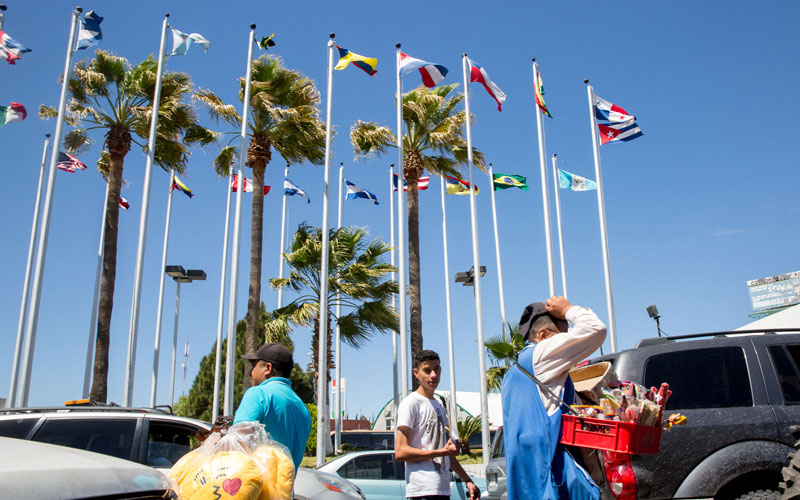 Vendors walk through cars while people wait to cross from Nogales, Sonora to Nogales, Arizona. (Photo by Courtney Pedroza/Special for Cronkite News)

As spring amps up with summer just around the bend, the outer reaches of Arizona become a travel destination worth pursuing. A weekend trip can mean a pleasant getaway before the heat of Arizona summer leaves us languishing and locked in our homes.

The towns and cities divided by the U.S.-Mexico border offer a unique look at Western life. Like we discovered of El Paso and Ciudad Juárez earlier this year, many of these regions are connected yet distinct.

They rely on each other for commerce, tourism and employment. They’re the first step into each country, yet, as many of the people we spoke to along the border strip said, the area looks and functions like a separate country unto itself.

Historic Old Bisbee was our first stop on the trip. The town is one of a few in Arizona that grew into an artist’s enclave from a “working man’s town” decades ago, according to local DJ Peter Young, who has lived in Bisbee for 42 years. Bisbee is characterized by angular, sloping streets that hum with people; at the bars, restaurants and shops in the small, eclectic downtown area, the locals all know each other and stop to smoke and chat.

Stopping in Bisbee, it feels as though one is no longer immersed in the typical representation of the Arizona desert. It is built at the steps of the mountains, seemingly hidden from public view. The city is a stark contrast to the suburban life of Sierra Vista on its left and the flat landscapes of Douglas on its right.

Residents describe the town as a place where people from all walks of life come together. Like money and class status, they say, rules are less critical, too: on the town’s narrow, steep streets, cars park where they can, direction and location often notwithstanding.

“Road Kill” Bill Robertson, 60, has lived in Bisbee for 16 years and stands as one example of the kind of people who are drawn here: He gets his nickname from a film he made, “A Road Kill Cautionary Tale,” in which the characters were played by the heads of four roadkill animals. After using them, he said, he gave each a decent burial. And at home, he has a freezer full of animals he’s scraped off the road over the years, just in case he ever makes another film.

“It’s a beautiful town,” Robertson said, grinning. “Full of freaks. I love it.”

And Bisbee often gets described as “quirky” and “funky,” but as with so many towns revitalized and made popular by the presence of “freaks” and artists, there are concerns about gentrification, with property values spiking and pushing out original residents. In Bisbee’s case, those concerns are intertwined with worries about the city becoming a tourist town.

Though concerns exist about Bisbee losing its funk, for a visitor, that artsy vibe is still very much alive. At the least, the town is a vibrant place for an afternoon or weekend of food, shopping and endless people-watching, from the large community of motorcyclists to the artists, young and old, who roam the narrow streets.

We rolled into Douglas around noon on Easter Sunday; the sun was high and bright and the town was almost deserted, presumably because of the holiday. Here is what we found:

The cities on both sides of the border present a small-town, colonial quaintness; there was a slow, steady, forbearing demeanor to the few people we talked to who were out and about. Douglas/Agua Prieta is the kind of area, it seems, where people grow up and stay for much of their lives. That informs the sense of comfort that rises from the streets of these cities.

After our experiences at larger border crossings like El Paso/Juárez and both Nogales, the Douglas/Agua Prieta crossing felt incredibly small and much easier to navigate. A shooting in the area in January by a Border Patrol agent during a drug seize is the latest source of tension here, but residents overwhelmingly expressed that they felt the two cities had a good relationship.

A lot more human activity was visible near the U.S.-Mexico border crossing into Agua Prieta. Mexicans from there said they would cross into Douglas for the day to buy grocery-store items. Around noon, some families were waiting with personal carts filled with bags. Other families were just entering by then.

Silvia Cruz, 54, sat at a bus station with her mother Irene on Easter, each carrying a cart with groceries. Irene lived 40 years in Tucson and now two years in Douglas — Silvia comes to visit her parents once a week but lives in Agua Prieta. They said that many families are split by the border here but visit each other regularly.

“We’re pretty united,” Silvia said. “We don’t have problems. Whether from (Douglas) to (Agua Prieta) or there to here. We’re in the same boat. The only problem is border customs. You can’t bring too much across — they take it all.”

Once we crossed, we could instantly see some of the sights familiar through many other cities on the southern side of the border. People waited in stations for the uniquely painted town buses. You could hear the loud music played by restaurants and convenience stores in the nearby distance. Small stands advertised for tacos and other street food.

The most interesting structure near the border (aside from the border fence itself): a thick, white double archway leading cars into the rest of Agua Prieta. For those looking to get the full experience of this city, this arch guides the way.

Nogales is the biggest border area in Arizona and, as such, we’ve already been there at least a couple times. Ambos Nogales, or both Nogales, demonstrate a distinctive difference between the Mexico and U.S. sides of the city.

Like many other areas on the northern side of the border (Sierra Vista comes to mind), Nogales, Arizona, is safely designed, with visible name-brand stores occupied by many of the people who cross the border to shop. Santa Cruz County is 83 percent Latino; Spanish is spoken throughout the region. The industry in Nogales, Arizona, is based largely around trade — imports and warehousing — and the city is full of trucks and feels, for the most part, industrial.

The moment you cross the border into Nogales, Mexico, the world comes to life. Vendors sell souvenirs; pharmacies along the border appeal to those who visit for medical tourism. The city is alive and vibrant, with residents surging through the crowded sidewalks.

Many of the business owners on the city’s border market want you to know — Nogales, Sonora is not violent or unsafe. The negative stigma is perception based on drug violence from years past that continues to impact some Mexican border communities more than it ever did Nogales. Some have worked next to the imposing wall their whole lives, while others have not crossed in years. To have a fence mark the abrupt stop of a country can feel disheartening, working as an obstacle to relations between the two nations.

Still, there are remnants of the tensions between the two cities. On Oct. 10, 2012, a Border Patrol agent shot and killed a 16-year-old from across the border wall, which stands tall atop a hill. Posters, spray-painted messages and a shrine commemorating the teenager still stand three and a half years after the incident.

Like many of the other border regions we have seen this year, it’s these stereotypes of negative relations that keep the border masked in mystique. Learning of the area’s people, seeing the border fence and visiting the regions for yourself can help challenge those preconceived notions to see how the border truly is today.

A shrine for Jose Antonio Elena Rodriguez stands next to the area where he was shot and killed by a Border Patrol agent more than three years ago in Nogales, Sonora, on March 28, 2016. (Video by Courtney Pedroza/Special for Cronkite News)