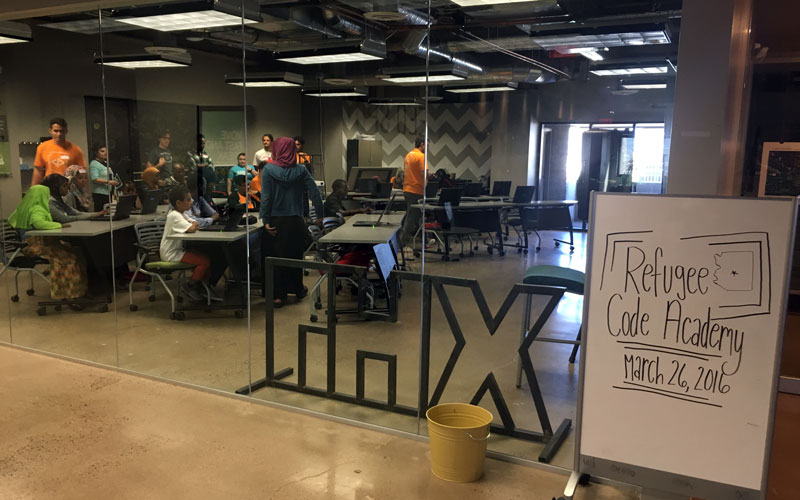 Eager students gathered for a day long “refugee coding academy” at Seed Spot, a business incubator that buzzed with energy.

Students as young as seven typed away on laptops as area tech professionals gave them hands on training in basic coding skills.

“I thought it would be cool to have another experience with my friends and get to learn something,” a 7th grader Haneen Elshishtawy said. She is from Egypt, but has spent most of her life in the United States.

Computer and information technology occupations are projected to grow 12 percent from 2014 to 2024 adding about 488,500 new jobs, according to the Bureau of Labor Statistics. Local tech startup founders, students, and volunteers organized the event to help young refugees in Arizona prepare for new job opportunities.

“Were trying to teach refugees how to code for the opportunity to kind of include them to build the future,”said Omron Blauo, project manager for the coding academy. “They’re kind of excluded and we think that giving them that opportunity to learn about technology is an amazing thing.”

The students spent the day learning how to code a game similar to Flappy Bird. While they only learned the basics, the goal of the academy was to spark interesting in pursuing coding in their academic careers that could later lead to better paying jobs.

“It’s a new experience for me. I haven’t really done coding before,” 15-year-old Samah Mohamed said. Mohamed grew up in Kenya and moved to the United States five years ago.

“It’s really amazing how women can get this opportunity,” she said. “It’s hard to get jobs. it’s hard to go to school. It’s hard to actually get money [in Kenya]. But here the economy is really good,”said Mohammed.

Blauo came up with the idea after he visited eastern Africa to do a research project during the rise of the refugee crisis. His father was a refugee from northern Africa.

Arizona currently has one of the largest refugee populations in America, with 2,964 refugee arrivals in 2014 according to U.S. Department of Health and Human Services.

“Most of them have not had the opportunity to be exposed to coding which is literally the future,”said Amena Mabrouk, a volunteer with the coding academy. “The major of them come from traumatic situations. They’ve lost family, they’ve been living in tents for a year at a time.”

For some of the students the workshop meant more than fun and games. Mastering a skill like computer programming could be a life-changing decision that leads to a better future.

““This life I have to change something. I have to do something,” Abdirizak Osman, 20, said. “I can still do the coding and do a lot of stuff.”

Osman was born in Somalia but spent the past decade in Kenya living in the Kakuma Refugee Camp, home to more than 50,000 Somali refugees reside according to UN Refugee Agency.

Osman arrived in Arizona five months ago as a refugee. ”There are a lot of problems in Africa, a lot of challenges,” he said. “That’s why we get to settle into the United States. There is no peace in Kenya.”

He is excited about the possibilities and gladly attended the coding academy. “I was looking for something to do in the future,” he said.

World Refugee Day is June 20th and Blauo, Mabrouk, and the rest of the volunteers behind the coding academy are aiming to do a larger event in both Phoenix and San Francisco.

“The goal is to unite,” Mabrouk said. “The more unity the better and I see this as a way to facilitate unity.”