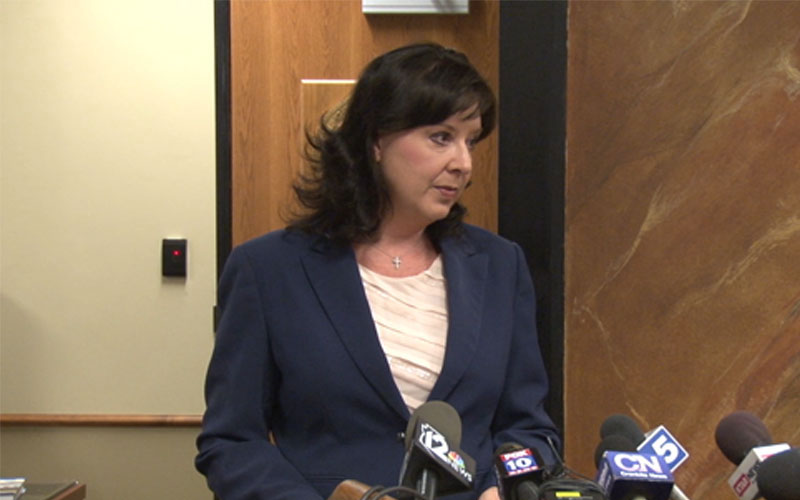 Arizona Secretary of State Michele Reagan responds to questions at her press conference on March 28. (Photo by Ben Margiott/Cronkite News)

Arizona Secretary of State Michele Reagan said she found out the day before the March 22 presidential preference election that Maricopa County elections officials had radically cut the number of polling places but she was not alarmed.

Reagan said in a news conference that she does not have “the statutory authority” to tell individual counties how many polling places they should open, but she had no concerns about the number the county offered.

The county cut the number of polling places from 200 four years ago to only 60, spurring long lines of voters who waited for hours. Reagan conducted the news conference just before the House Elections Committee conducted a hearing on the debacle that prompted calls for a U.S. Justice Department investigation and voter condemnation.

“I did not second guess the county decision or the Board of Supervisors’ decision,” Reagan said.

Even if she had, Reagan said, the secretary of state does not have the legal standing to dictate how many polling places counties should have, even if the state believes there are not enough.

“We did not (try to direct Maricopa County),” Reagan said. “Because we do not have the statutory authority to direct the counties as far as voting locations.”

Reagan said in hindsight she wishes she had questioned the lower number of polling places and pushed the issue. But, even if she or her staff members had thought there would be an issue, Maricopa County would not have had to listen to the suggestions, she said.

When asked if she took ultimate responsibility for the problems in polling in Maricopa County, Reagan responded many officials share some blame.

“Ultimately, it is election officials’ responsibility, absolutely,” said Reagan, who had praised County Recorder Helen Purcell on the Monday before the election. “I wish that we had questioned it.

“I believe we’re all in this together, absolutely and I take responsibility for the fact that election officials did not pull off the election that voters deserve,” Reagan said.