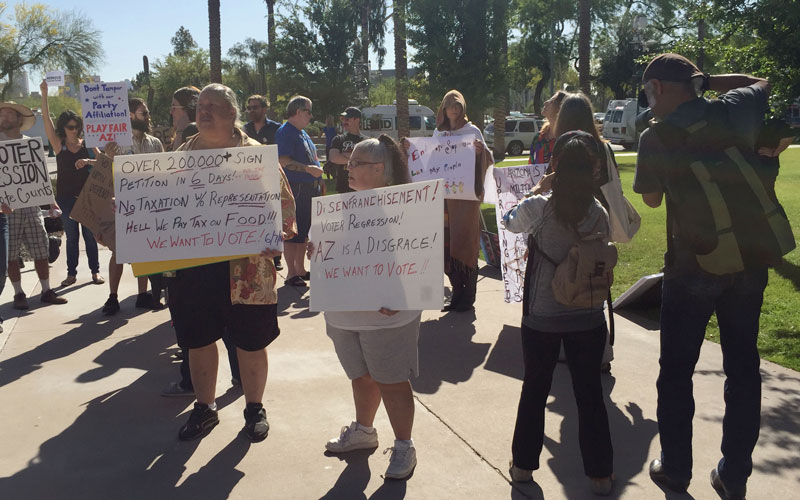 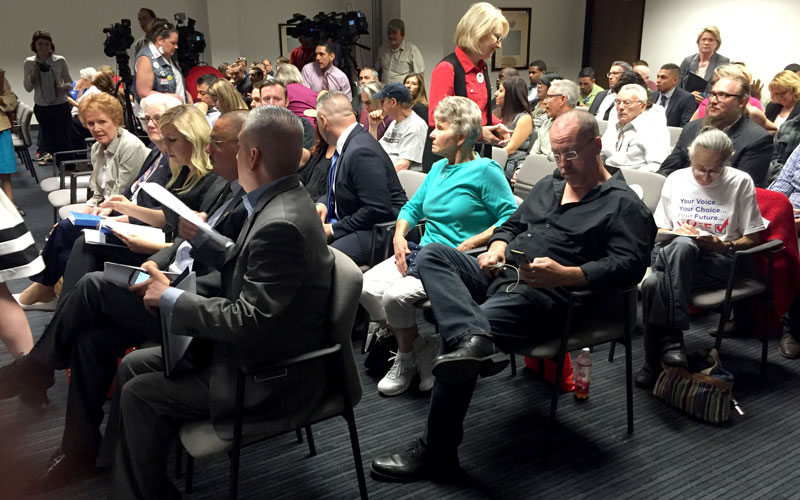 Reagan: Office has no jurisdiction over county polling places in presidential preference election

Many registered voters said that they felt disenfranchised by a voting process that left them standing in line for hours and prevented some from casting a ballot in the presidential preference election even though they had been a registered Democrat or Republican for years.

“I was robbed of my vote,” said one speaker at the House Election Committee hearing at the state capitol. “This is the rape and murder of our democracy.”

The crowd applauded, as they did repeatedly on Monday to mark their agreement with speakers who called for elected officials to be held accountable for cutting polling places from 200 four years ago to only 60 last Tuesday.

County Recorder Helen Purcell drew the most ire, even as she apologized to the committee. “I made a mistake,” she said.

“You’re asking us to trust the very same people that created this mess to come back in May and fix it,” Randy Perez told the committee.

Audience members yelled that Purcell is “incompetent” were heard over her testimony as many audience members turned their backs to the county recorder. The dissatisfied crowd asked for her to resign from her elected position.

Purcell had lobbyist Jen Marson the Arizona Association of Counties at her side to explain the reasoning behind the polling place reduction. However, Chairman Michelle Ugenti-Rita demanded that Purcell explain what happened on Tuesday.

The crowd of protesters packed into three rooms in the Arizona State House building and more overflowed into the hall as they waited to share their election story.

Time after time, people spoke for their allotted two minutes to tell their story.

There was the woman who said she and her daughter stood in line. Her daughter planned to vote as a Democrat but her party affiliation had been changed to Independent.

There was a man who walked with a cane and said people who are disabled struggled to stay in the long line.

There was the voter registration advocate of spoke of the woman who had served her country as a soldier, registered with a designated party and still was denied a vote.

Secretary of State Michele Reagan acknowledged to the committee that registered voters showed up in the database with the wrong party affiliation.

Reagan also apologized to “voters that are frustrated and angry.”

She blamed several technological difficulties for the voting disaster including a polling place locator that was not working properly and an online system that voters could use to check registration before showing up at the polls that did not accept lower case numbers when drivers license numbers are entered.

The angry crowd booed and jeered as Reagan spoke.
Many protesters are asking for a re-vote that would resolve the issues at the polls since many registers voters could not participate in the election.

Committee members listened and asked questions of their own during the 3 ½-hour hearing, including whether saving money was a valid reason to cut back on polling places.

In the end, though, no resolutions or solutions were reached and the hearing was adjourned without everyone who wanted to speak getting a chance to do so.

The committee adjourned the committee meeting after 3 ½ hours, with chair Ugenti-Ritar saying legislators had to return to the House floor.

Some of those at the hearing then went to the House gallery.

Several Department of Public Safety officers surrounded one person wearing a Guy Fawkes mask and dreadlocks, according to witnesses.

The man, whom state officials did not identified, was asked to leave multiple times by the sergeant-at-arms, according to Arizona state trooper D.M. Curtis.

Curtis said the man was arrested and accused of trespassing after he continued to yell in the gallery and wouldn’t obey DPS’ demands to leave.

“We completely support anybody’s First Amendment rights,” Curtis said. “It’s when the sergeant-at-arms says to remove somebody, we have to then step in and remove them from the property.”

Janet Higgins of Gilbert saw the incident differently, saying the officers had no reason to arrest the protester.

“He was sitting quietly in the gallery when four or five police officers took him to the ground right there in the gallery,” Higgins said. “They held him on the floor for over five minutes.”