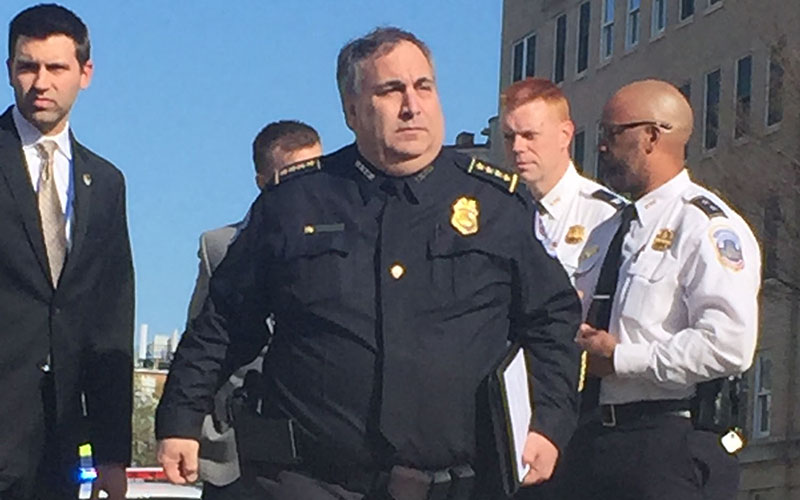 U.S. Capitol Police Chief Matthew Verderosa heads to a news conference after a gunman was shot while he was trying to enter the Capitol Visitor Center, leading to a brief lockdown of the entire Capitol complex. (Photo by Jessica Swarner/Cronkite News)

The shooting came after high-profile terrorist attacks in Belgium and Pakistan over the past week, but police said they did not believe the Capitol attack was “anything more than a criminal act” by a single person. (Photo by Jessica Swarner/Cronkite News)

WASHINGTON – Arizona lawmakers praised the response of U.S. Capitol Police after a gunman was shot Monday as he tried to enter the Capitol Visitor Center, triggering a brief but tense lockdown.

“Beyond grateful that all of my staff in Washington, DC are safe. Thank you to @CapitolPolice for their protection and service.” said Rep. Trent Franks, R-Glendale, in a tweet, one of several Arizona lawmakers who took to Twitter after the shooting.

The incident began at 2:39 p.m. EDT when the man entered a security checkpoint at the visitors center and triggered a metal detector, police said. He pulled a gun and pointed it at officers, who immediately shot the man.

The suspect was not seriously injured and was taken to a nearby hospital where he was undergoing surgery Monday afternoon for injuries that were not life-threatening, according to Capitol Police Chief Matthew Verderosa.

Verderosa said no officers were injured in the exchange but that a bystander, whom he identified only as a 35- to 45-year-old woman was slightly injured by shrapnel. She was also taken to the hospital for treatment.

Verderosa said at a news conference that the suspect was “known to” Capitol Police, but he did not immediately release the gunman’s identity. No charges had been filed as of Monday afternoon, he said.

Tourists fled the building after hearing gunfire, but those still inside, including congressional staffers, were told to “shelter in place.”

“Everybody is safe and accounted for here,” said Christina Carr, a spokeswoman for Rep. Ruben Gallego, D-Phoenix. A staffer who answered the phone during the lockdown in the office of Rep. Matt Salmon, R-Mesa, said they had not seen much but were sheltered in place and also safe.

The House and Senate are in recess this week, meaning most members of Congress were not in town Monday.

Streets around the Capitol were barricaded and police tape was widespread as the grounds were investigated for about an hour before the lockdown was lifted. The visitors center was to remain closed until Tuesday while police processed the scene.

Terror attacks in Brussels, Belgium, and Lahore, Pakistan, set the world on edge in the past week, but Verderosa stressed that this incident did not appear to be an act of terrorism.

“We believe this was the act of a single person who has frequented the Capitol grounds before, and there is no reason to believe that this is anything more than a criminal act,” he said.

The suspect’s vehicle was located on Capitol grounds following the incident, and will be searched for hazardous items and seized once a search warrant is obtained, Verderosa said.

He said the Capitol will be fully open Tuesday.

“I want to assure the American and visiting public that the U.S. Capitol Police officers continue to protect the Capitol and the CVC (Capitol Visitor Center) for all who visit,” he said. “We expect regular order of business tomorrow morning.”