Voters line up outside a Valley polling place Tuesday, when some people had to wait hours to cast a ballot. (Photo by Cronkite News) 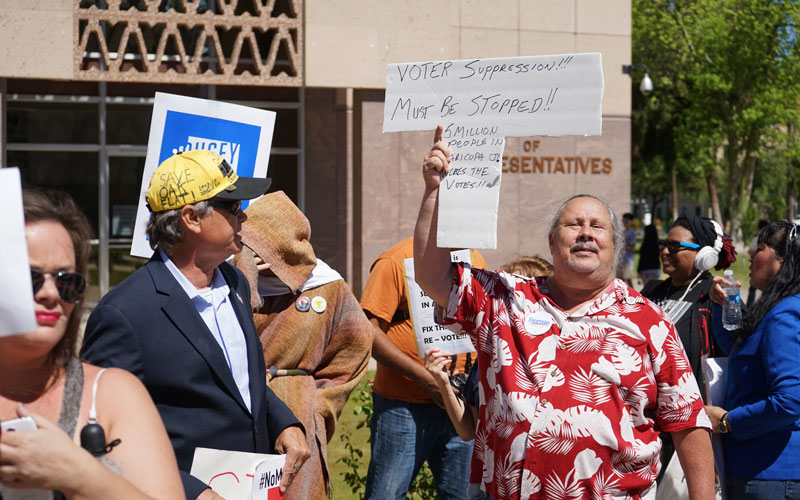 WASHINGTON – A petition demanding an investigation into problems with Tuesday’s presidential primary voting in Arizona had already collected more than 100,000 signatures as of Thursday, obligating a response from the White House.

The petition alleging “voter fraud and voter suppression” in the Democratic primary was one of two on the White House site sparked by the Arizona vote, which included voters being turned away from the polls and waits that lasted hours in some instances. The petition on the White House’s “We the People” site rew more than 100,000 signatures in two days.

The second petition, calling for a new vote, had garnered almost 20,000 signatures as of Thursday evening. Both were only started Tuesday.

Petitions on the White House’s “We the People” website that gather 100,000 signatures in 30 days are taken to the appropriate administration officials for review and a response in a “timely fashion,” according to the site. But a response does not guarantee action: Typical responses to other successful petitions are often a restatement of administration policy.

They are the latest calls for action in the wake of Tuesday’s voting, sparking probes by voting rights groups and calls from city and state officials for a Justice Department investigation.

Justice Department officials did not return a request for comment Thursday, but a spokesman for Arizona Secretary of State Michele Reagan said her office has scheduled public hearings next week in addition to its typical post-election review.

“We’re focused on trying to make things better and improve the voting experience,” said Matt Roberts, the spokesman. “We certainly understand the frustration and we’re going to make our best effort as to improve it moving forward.”

He said most of the complaints came from Maricopa County, where election officials cut the number of polling stations from 200 in the last election to 60 this week, leading to waits lasting hours for some voters.

“We got many phone calls from voters who were standing in line for hours to cast their ballot because of Maricopa County’s decision to move from a precinct-based voting system to voting centers,” said Maria Peralta, an official with the Lawyer’s Committee for Civil Rights Under Law.

The Washington-based group, which operates a voter hotline, was reaching out to people who called from Arizona to get details on their experience at the polls. She and other voting rights advocates said the problems are the first fallout from a 2013 Supreme Court ruling that eased restrictions of the Voting Rights Act on states like Arizona.

Steve Kilar, a spokesman with the American Civil Liberties Union of Arizona, said it has received calls about Tuesday’s primaries and was launching its own probe but that it is too soon to comment on potential voter suppression.

That was just one of the allegations in the White House petition, which also said that “numerous” voters who had switched their registration from independent to Democrat were turned away from the polls or given provisional ballots that were not counted.

Despite being focused on Arizona, many of the signatures appeared to come from residents of other states.

“We the people of the United States of America find this act alarming and would like a complete investigation to uncover the violations that occurred during the Arizona voting on 3/22/2016 and prosecute those responsible to the fullest extent of the law,” the petition says.