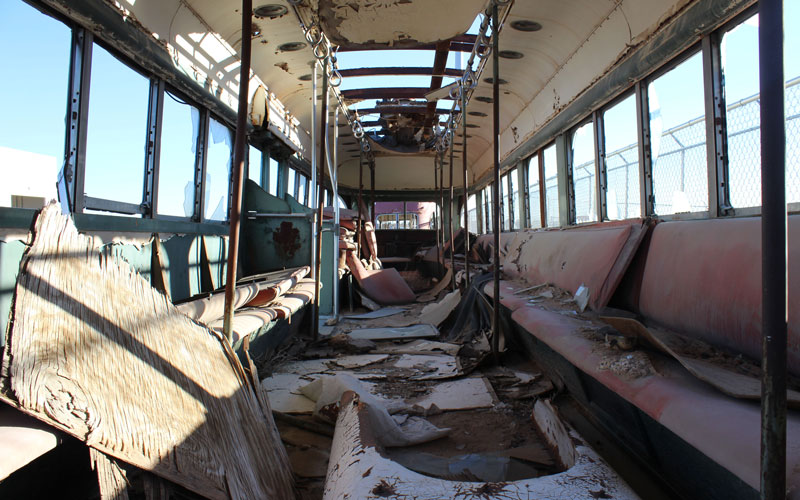 The historic streetcars that used to travel between El Paso and Ciudad Juárez stopped operation in 1974. Now, several are being refurbished to start running again in 2018. (Photo by Molly Bilker/Cronkite News) 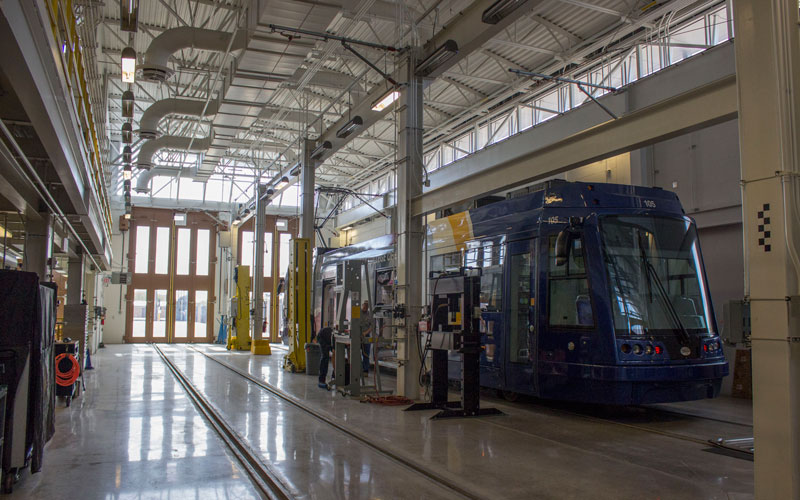 Tucson’s SunLink trolley is what’s known as a modern streetcar, without callbacks to or refurbishment of vintage trolleys, as some other cities use. (Photo by Molly Bilker/Cronkite News) 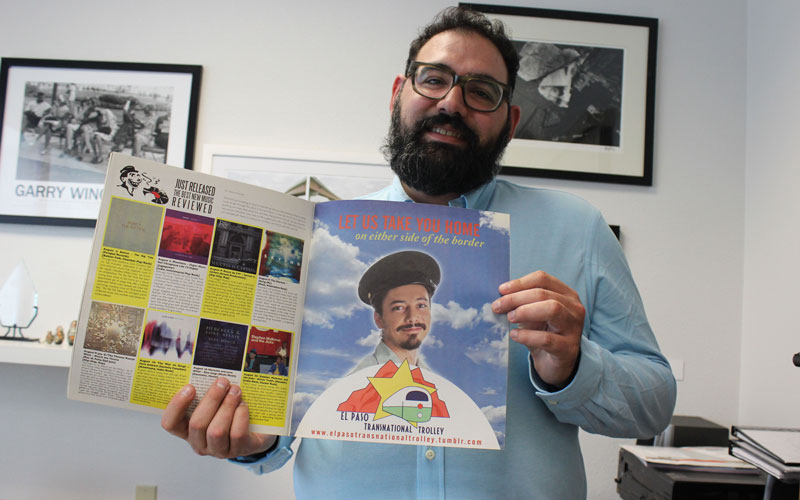 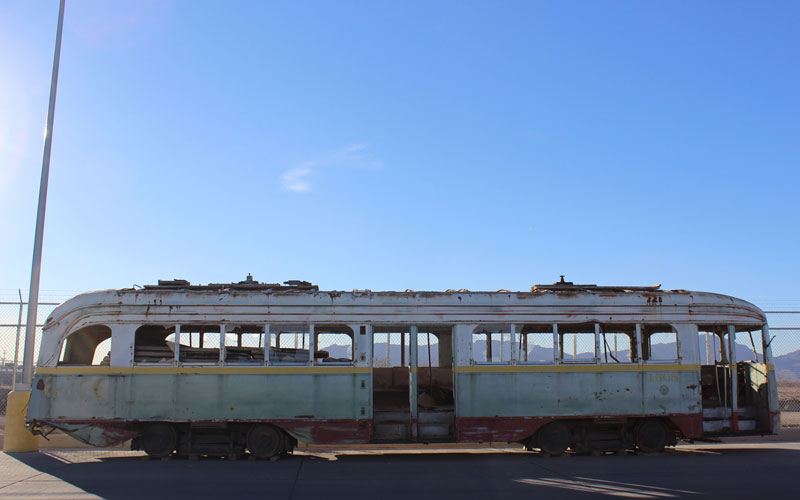 Several historic trolleys that used to move between El Paso and Ciudad Juárez have been recovered and will be refurbished for the city’s planned streetcar line. (Photo by Molly Bilker/Cronkite News)

EL PASO, TEXAS — Peter Svarzbein, city councilman for this Texas border community, makes a left turn at a parking garage near the university campus. The street ahead — to many just flat black asphalt and bright yellow lines — is one that, to Svarzbein, holds the city’s future.

That future — a dream of Svarzbein’s many years in the making — is a streetcar that, in its first phase, will connect the University of Texas at El Paso to the city’s downtown, and eventually into Ciudad Juárez.

“This city … is choosing to remanufacture, refurbish and bring back to life a symbol of a time where our two cities were much closer together in a practical, daily function,” Svarzbein said. “Not only do we not want to forget that, but we want to celebrate that. When we have visitors come to our city, we want them to ride that history.”

El Paso is far from the only city bringing back the streetcar. In Arizona, streetcar projects are also in the beginning stages in Tempe and in Phoenix’s booming downtown.

The rebirth of the streetcar is a reflection of the rise of “new urbanism” — an influx of people back into cities with a focus on making urban areas walkable and livable, said Bob Graham, principal architect of Motley Design Group and the mind behind Phoenix’s own streetcar project, the Grand Avenue Rail Project.

Streetcars of the early 20th century
The early decades of the 1900s — particularly the ‘20s — saw the development of streetcars in big cities. In that era, these trolleys marked an “up and coming” city: Streetcars were not just a people mover but also a symbol of progress and modernity, Graham said.

“A lot of things that happened in Phoenix and in new towns around the West were directly related to land development boosterism,” Graham said. “Real cities had a streetcar. If you didn’t have a streetcar, you were just some podunk town out in the West.”

Phoenix had a streetcar line that ran until 1948. One mostly restored car and the framework of another from that line are housed at the Phoenix Trolley Museum, which is seeking a new space after its lease for its building with the city of Phoenix was not renewed.

Historic trolleys in other cities followed a similar timeline. In Tucson, horse-drawn streetcars were present when the city was a “major development area,” said city of Tucson Transit Administrator Jeremy Papuga. In El Paso, streetcar lines that were developed for more than 63 miles of the city in the 1920s were removed in 1974, after Mexican merchants in Ciudad Juárez across the border ripped up the trolley lines that came into their city from El Paso in 1973.

The death of the streetcar across the United States between the 1960s and 1980s corresponded with people fleeing urban areas for the suburbs, Graham said. Now, as people return to the cities, so do streetcars.

“Phoenix is finally getting back to looking like a downtown, like it did in the ‘40s. Streetcar systems support that,” Graham said. “It’s all part, in my view, of one big trend in how the urban fabric of America changes.”

The renaissance comes to Arizona
Two streetcar projects are underway in Arizona: a Tempe trolley line planned to be operating by 2019 and a downtown Phoenix circulator route with over $800 million budgeted for construction sometime in the next 35 years.

The form of transportation — whether light rail, bus or streetcar — is dependent on the needs of the area, said Valley Metro Communications Manager Susan Tierney. Streetcars are best for transporting people who are already in an urban center where distances between stops are walkable, but visitors may not want to walk that distance, Papuga said.

Tucson’s streetcar, which began operation in 2014, provides an example of the impact streetcars can have in an area. Papuga said economic development has been seen along the Tucson line, from grocery stores to residential housing.

Some are concerned that these public transit sources will be costly without bringing in much money for the city. While it’s true that public transit in the United States typically doesn’t make money, Papuga said, rail lines such as light rail and streetcars are lauded for economic development potential.

The Valley Metro light rail line has seen $8.2 billion in investment in its first 20 miles, Tierney said. The city hopes to see the same in Tempe.

“There is a lot of density and there are a lot of opportunities for increased economic development,” Tierney said. “We would continue to see the investment, we believe, along the Tempe streetcar because of the appealing nature it has to employers as well as retail, commercial and public investment.”

In Phoenix and across the West, streetcars exist at a juncture between placemaking and economic development — and a juncture where the country’s history and its future coincide.

“To me, the whole story of streetcars … it’s the history behind them and the stories that connect Phoenix back then to, potentially, Phoenix of the future,” Graham said. “It helps bridge that gap and get people thinking more broadly about possible changes in our transportation system.”

A cross-border connection in El Paso and Ciudad Juárez
In El Paso, the city’s history is central to its hopes for developing a streetcar line and reconnecting with its Mexican sister, Juárez. The city saved nine historic trolleys from its original line and sent six to be refurbished in Pennsylvania for the route from UTEP to the city’s downtown, which is slated to be finished and running in 2018.

That’s just the first phase of the plan. The second, which was approved on El Paso’s end in early February, would travel between El Paso and Juárez, like the original streetcar.

For Svarzbein, the El Paso streetcar began with an art project: posters advertising the fictional Transnational Trolley company, to remind residents that something once connected the two cities.

Svarzbein hopes that by reviving the non-fictional historic trolleys, El Paso and Juárez will come back together on a cultural and spiritual level — evoking their historic relationship before the border fence was erected and border security was increased.

“This is what it is to be from here. It’s the bridges. It’s the trolleys. Those things that allow us to cross … represent this region,” Svarzbein said. “I wanted to blur those borders.”

CORRECTION: Because of a reporter’s error, a previous version of this story had an incorrect date for the end of the Phoenix streetcar line and an incorrect number for the number of cars that remain.