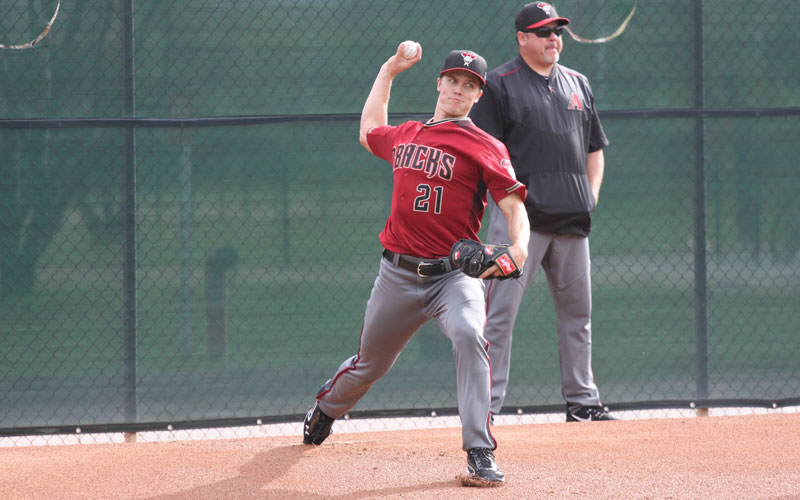 Signing Zack Greinke to a six-year deal worth more than $200 million bolstered the Diamondbacks’ rotation while taking away one of Dodgers’ most-prized arms. (Photo by Jessica Watts/Cronkite News) 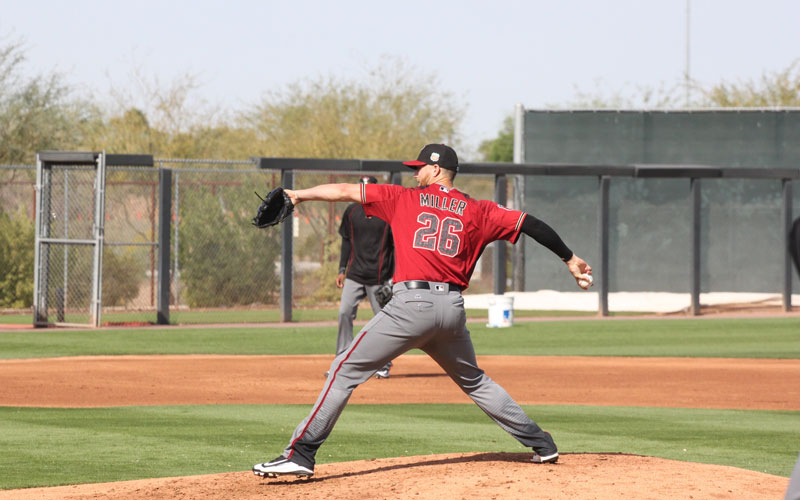 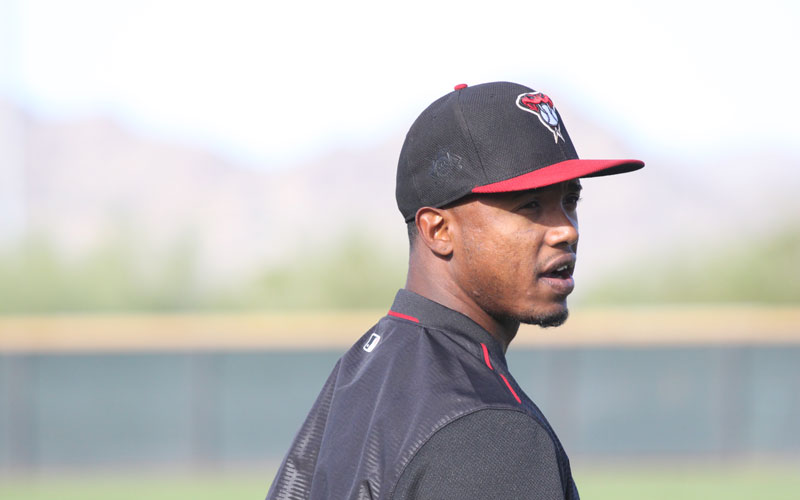 Jean Segura played shortstop with the Milwaukee Brewers, but the Arizona Diamondbacks have shifted Seguara to second base this spring. (Photo by Jessica Watts/Cronkite News)

The West Coast powerhouses finished in the top two spots in the division for the third time in four seasons in 2015, and with the built-in advantages of playing in large television markets and ownership willing to spend money on top players, the Giants and Dodgers have become fixtures at the top of the baseball world.

But the Arizona Diamondbacks may be set to shake things up this year with a flurry of offseason moves made with the goal of contending immediately.

On Dec. 4, Arizona shocked the baseball world, signing free-agent pitcher Zack Greinke to a six-year deal worth more than $200 million in a move that bolstered the Diamondbacks’ rotation while taking away one of Dodgers’ most-prized arms.

“I think that for them to ultimately sign Greinke, that surprised everyone,” first-year Dodgers manager Dave Roberts said. “It might not have surprised them internally, but when you get a player of that caliber, they were aggressive and they’re better for it.”

Greinke left the Dodgers after recording a league-best 1.66 earned run average, a 19-3 record and a second-place finish in the NL Cy Young Award voting last year. Los Angeles loved the one-two punch Greinke formed with fellow ace Clayton Kershaw, but Greinke opted to break up the duo for a contract that averages $34.3-million annually, making him the highest-paid pitcher on a per-year basis in history.

Signing Greinke was such a high-profile acquisition that it overshadowed other Diamondbacks transactions that the organization hopes will put it in the hunt for its first division crown since 2011.

“When you have the ability to score runs, play defense, and now we’ve done something with the top of our rotation, I like our chances,” Stewart said.

After watching the Diamondbacks add Greinke, the Giants responded and flexed their deep pockets by doubling up on starting pitching acquisitions in the free-agent marketplace.

San Francisco snagged two of the most sought after right-handed arms in Johnny Cueto and Jeff Samardzija, Each finished 2015 with their worst earned run averages of the last five seasons, but they have recorded a combined seven seasons with a sub-3.15 ERA since 2011.

Both pitchers commanded upwards of $18 million annually, despite posting above average ERAs last year. But according to San Francisco General Manager Bobby Evans, the risk of bringing in pitchers coming off down years is worth the potential reward.

The signings help the Giants keep pace with opposing pitching staffs, something they struggled to do at times in 2015 when the team’s rotation recorded an ERA of 3.95, the club’s second-worst mark for starters since 2008 .

“Starting pitching was an area where we struggled last year, so for us, it was a necessity to get ourselves in a position to pitch deeper into games and to give our lineup a chance to keep us in the game,” Evans said. “At the end of the day, the rotations that we’re facing in the National League West are tough.”

With the additions of Greinke and Miller to the Diamondbacks rotation and the presence of Madison Bumgarner, Tyson Ross and Kershaw in the division, the NL West now boasts five pitchers who finished the 2015 season with ERAs below 3.30.

While the Giants and Diamondbacks opened their checkbooks this offseason to improve their pitching, neither team’s overall payroll will fluctuate greatly relative to the rest of the league.

According to Spotrac.com, a website that tracks team payrolls and player contracts throughout professional sports, the Diamondbacks’ payroll will jump from 28th in 2015 to 21st in Major League Baseball in 2016. In comparison, the Giants’ payroll stands to actually fall back a slot from fourth in 2015 to fifth in 2016, thanks to an offseason splurge made by the Detroit Tigers.

Arizona’s decision to add veteran pitching this offseason turned heads around the division and contributes to the anticipation of balance within the division, but the team is hoping to avoid the same fate that befell the Padres last year.

San Diego General Manager A.J. Preller added outfielders Matt Kemp and Justin Upton, starting pitcher James Shields and utility player Wil Myers before the 2015 season in an aggressive play to contend. But after the taking the team’s payroll from 24th in baseball in 2014 to No. 13 in 2015, the Padres finished just 74-88, a three-game drop from their 2014 mark of 77-85.

Preller said he thought the Padres were discouraged by a slow 11-12 start during the month of April following the sky-high preseason expectations. He maintains that it is important for the Diamondbacks, or any club hoping to contend, to live up to the hype over the course of the entire season.

“Like anything, expectation is probably a good thing because ultimately it means that people are excited and they expect you to be a good club,” Preller said. “I think each team is different and every year is different and baseball is a long season so you’ve got to understand, you may not get off to a great start, there’s a lot of ebb and flow to the year.”

Despite the dominance the Dodgers and Giants have exhibited in recent years, managers and general managers throughout the NL West believe the division will be more balanced this season.

“I’ve said it for years, that I think the National League West on a national scale is underrated, but I think as far as the level of competition, with the acquisitions this winter that the Giants and the Diamondbacks made, the ante has probably been raised,” the Dodgers’ Roberts said.

Fortunately for the clubs playing in the two largest markets in the West, they have deep-enough pockets to attempt to continue to build upon the foundation they’ve set over the last five seasons. As the Giants proved with the signings of Cueto and Samardzija, they aren’t willing to stand pat while their counterparts make improvements.

“The Dodgers aren’t going away. They’ve got too much talent, they pretty much have controlled the West here recently,” Giants manager Bruce Bochy said. “It’s going to be a tough division, it really is. Colorado has been tough on us, San Diego, I think it’s probably going to be as tough as any division in baseball.”

General managers like Evans, Preller and Stewart have embraced the notion that the National League West will be fiercely contested this season. While Arizona’s signing of Greinke came as a shock to the baseball world, Stewart and the Diamondbacks know it’s the type of move that has become a necessity if they want a shot at contending within one of baseball’s most hotly contested divisions.

“If you’re thinking logically, we won 78 games last year. With the addition of Greinke, Miller, Clippard, Segura, people that make your team better, I think it’s impossible for us to only win 78 games,” Stewart said.