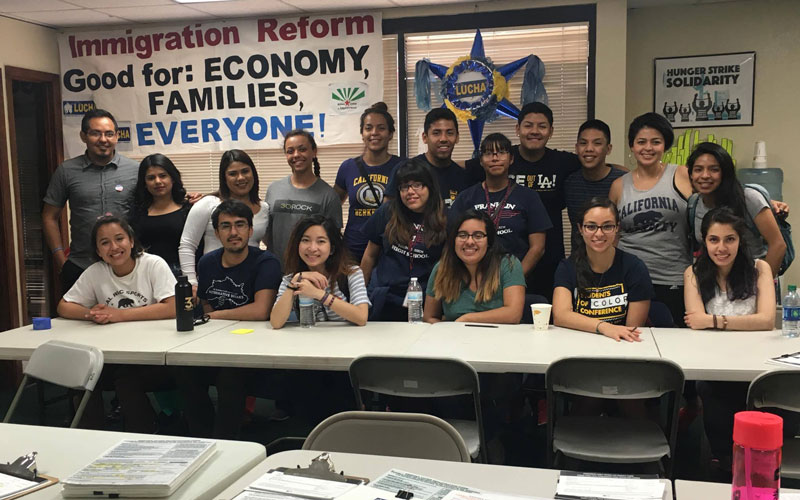 A group of canvassers, before going out to register voters near 51st Avenue and Baseline Road on Tuesday, March 22. (Courtesy of Abril Gallardo) 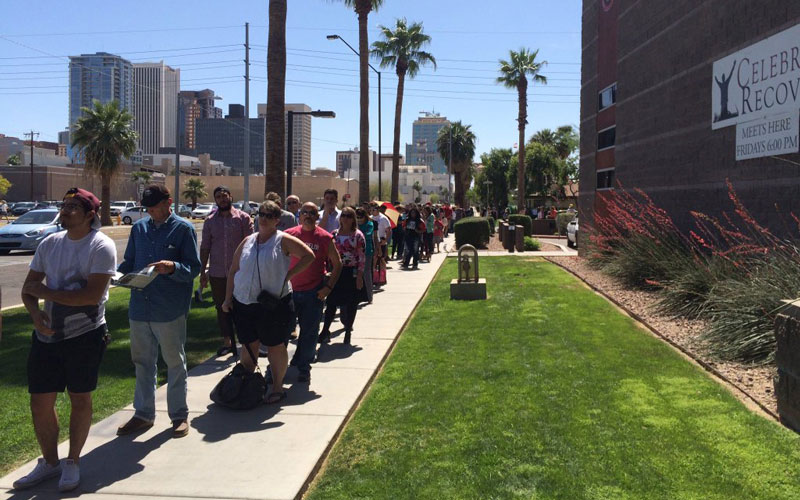 People line up to vote outside the Salvation Army’s Citadel Corps polling place in downtown Phoenix on Tuesday, March 22. Some were in line for almost two hours. (Photo by Jacob Garcia/Cronkite News)

The turnout underscored the impact of Latino voters and represented for advocates a turning point, a welcome change from past elections, when Latinos have historically showed up in low numbers.

“We’re offended … because there are so many amazing people in Arizona really trying to change that,” she said. “There’s people here that are completely against it and will not stand for that type of behavior and that type of speech or candidate.”

For Latino rights groups like One Arizona, Tuesday’s primary was just one chapter of a story that leads up to November’s general election.

“As much as we love (the primary) … it’s a nonstop process,” Juarez said. “It’s been very exciting, but I think the registration and all that goes on throughout the year.”

The large win for Trump was predicted by early state composite polls, which said Trump had a 95 percent chance of winning the vote, according to FiveThirtyEight.

Clinton’s win was an example of her continued Latino support across the nation. She won the Democratic primary in three other Hispanic-heavy states — Florida, Nevada and Texas — earlier in the year. In Arizona, she won every county except for Coconino.

Hispanic support for Clinton has been expected. A national poll by Univision Arizona and The Washington Post held earlier this year showed 57 percent of Hispanic Democrats would vote for Clinton in a primary election, in comparison to 28 percent for Bernie Sanders.

In Santa Cruz County along the U.S.-Mexico border, Clinton won the Democratic vote by more than a 2 to 1 margin, even though Sanders was the only candidate to visit the border fence last week. That county is 83 percent Hispanic.

A January study released by Pew Research Center showed that millennials would make up nearly half of the eligible Hispanic electorate.

“Arizona has also experienced fast growth in its Hispanic electorate, with a projected 1.3 million Hispanic eligible voters in 2016, up from 796,000 in 2008,” the report stated.

LATINOS VOTING FOR THE FIRST TIME

Hispanic voters stood in line outside a downtown Phoenix polling station Tuesday, some voting in a presidential race for the first time.

Many of the millennial Latino voters were there to cast votes for Bernie Sanders, including brothers Dominick Martinez and Uriel Esquivel, both 18, who went to the polling station after getting out of school.

“You’re experiencing the world now. You have to change it, because I don’t want Trump to win; he’s not in my best interests,” Esquivel said. “Bernie is. I mean, free college? Who doesn’t want that?”

Carina Tavizona, 19, is also voting for president for the first time. She was originally going to vote for Clinton but switched to Sanders because he stuck “a little closer to his word.”

“There are so many people who think that (your vote) doesn’t matter, but it all accumulates into one huge thing for your state,” Tavizona said. “I see (Latinos) becoming citizens every day, and they register to vote with the first chance they get.”

Beside her in line was 20-year-old Virginia Valenzuela, who was looking to learn more about the elections. She believes the trend of Latinos getting their citizenship to vote “against” Trump in the general election is in the wrong spirit.

“I think that’s the wrong purpose for someone to get their papers,” Valenzuela said. “Trump is whatever he is, but let’s be honest, right now he’s just being a joke.”

(Near the front of the polling line, where people waited for more than an hour and a half, one young Latina who voted in the early ballot was attempting to convince her friend to change her vote from Clinton to Sanders.)

GROUPS LOOK BEYOND TO NOVEMBER

Some immigrant rights groups sent out volunteers to shopping centers Tuesday afternoon to continue registering voters for the general election.

Abril Gallardo, the program coordinator for Living United for Change in Arizona, organized a canvassing group near 51st Avenue and Baseline Road.

“We’re gonna be on the field until election day,” she said.

Gallardo, who is undocumented, registers voters as a chance to participate in the electoral process.

“Having the privilege or the civil right to vote, it’s something precious, and not everybody has it,” she said. “There’s no such thing as, ‘I can’t do anything because I can’t vote.’”

Juarez credits the rise in Latino voters to the impact that several high-profile policy items, including immigration, education and employment, could have on Latinos.

“When you’re constantly being attacked as a community, that’s when you see the numbers increase,” she said.