Gov. Doug Ducey boasted about Arizona’s success in closing the “skills gap,” during a speech to the U.S. Chamber of Commerce. (Photo by Madison Alder/Cronkite News) 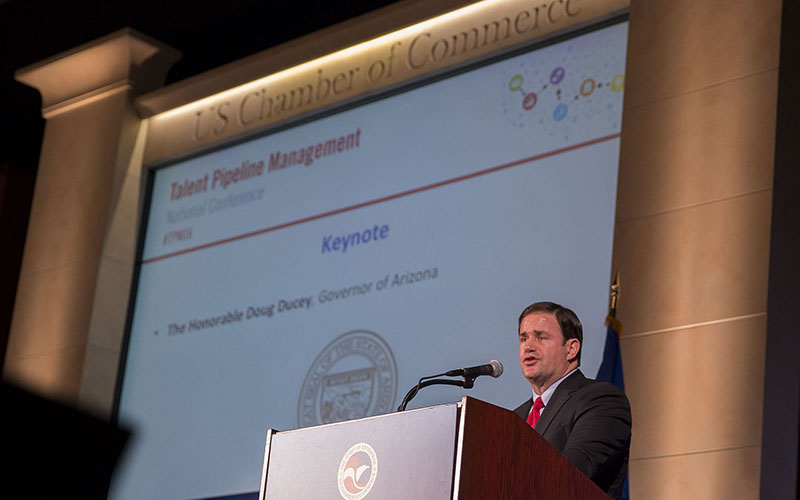 WASHINGTON – Gov. Doug Ducey boasted to the U.S. Chamber of Commerce Wednesday that Arizona’s strong workforce and education systems have helped the state close the gap between workers and the skills they need in the workforce.

“We need to make sure our students are properly prepared to meet the needs of the industry,” said Ducey, the keynote speaker at chamber’s conference on “closing the skills gap in America.”

Ducey pointed to success in the state’s K-12 schools and said he hopes voters will authorize a “historic investment” in the schools by approving Proposition 123 in May.

U.S. Chamber of Commerce Foundation President Carolyn Cawley said Ducey’s success has been through a “remarkable and sometimes unusual combination of vision and action.”

She pointed to the $3.5 billion in additional school funding that would come with Prop 123, funding to critical and technical education programs and Ducey’s efforts to bring executives from “critical” industries to the State Workforce Board.

“Talk about problem solvers and creative solutions,” Cawley said, before turning Ducey over to the crowd of several hundred.

But Ducey told the audience that Arizona hasn’t completely avoided the problem.

“The skills gap has hit hard in Arizona in some pretty key areas: medical, manufacturing, science, technology, engineering and math,” he said. But focusing on those issues will help make Arizona the “No. 1” state in the country to live and do business, he said.

Ducey pointed to a Forbes article that ranked Arizona No. 1 for future job growth in the nation. He also said that the estimated 100,000 new residents who moved in to the state in 2015 as further evidence of the state’s flourishing economy and job opportunities.

“A strong economy demands excellent schools,” Ducey said, once again noting how Prop 123 will help the state bring in the most “new dollars” to K-12 education.

But an official with state teacher’s union cautioned that Prop “123 is an important piece, but not the only piece.”

Joe Thomas, vice president of Arizona Education Association, said the association is “happy we have a settlement because it shows that the governor and the Legislature are working toward the same goal,” but cautioned there is still more needed to fix in the system.

The next problem that will need to be addressed is the high number of Arizona teachers leaving the classroom because of oversized classes and a lack of support from the government, Thomas said.

“We have to make teaching attractive again,” he said.

Ducey said Arizona’s success so far has created a “roadmap” for other states to follow, a roadmap that depends on less government control and a public “realizing politicians don’t make jobs, but they do create the environment in which jobs are created.”

“We were proud that the chamber of commerce invited Arizona out here to talk about the exemplary work we’re doing in career and technical education,” Ducey said after his speech.