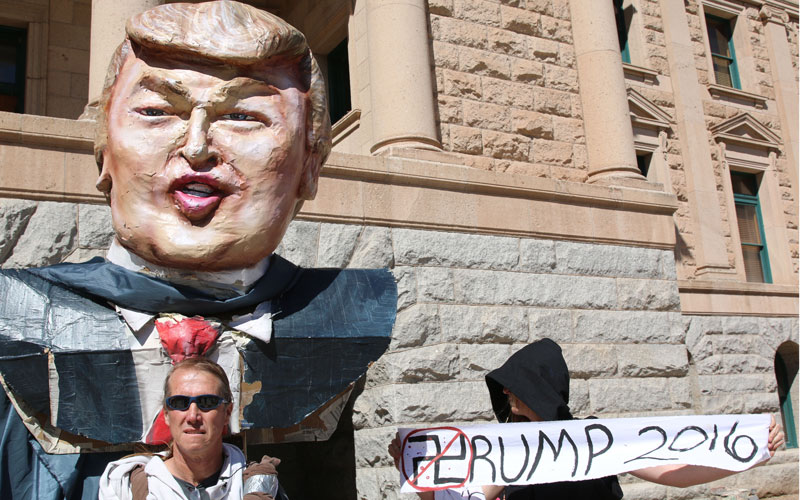 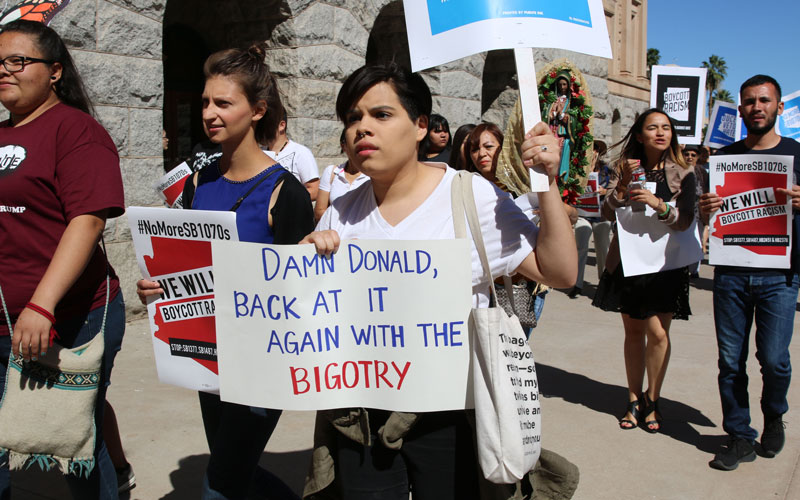 Protestors march at a rally at the Arizona State Capitol Wednesday.(Photo by Gabrielle Abbott/Cronkite News) 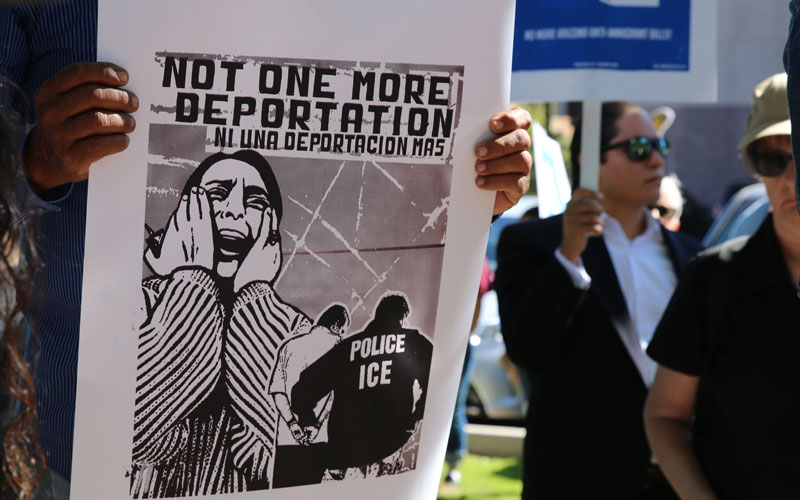 A protester holds a sign at the Arizona State Capitol.(Photo by Gabrielle Abbott/Cronkite News) 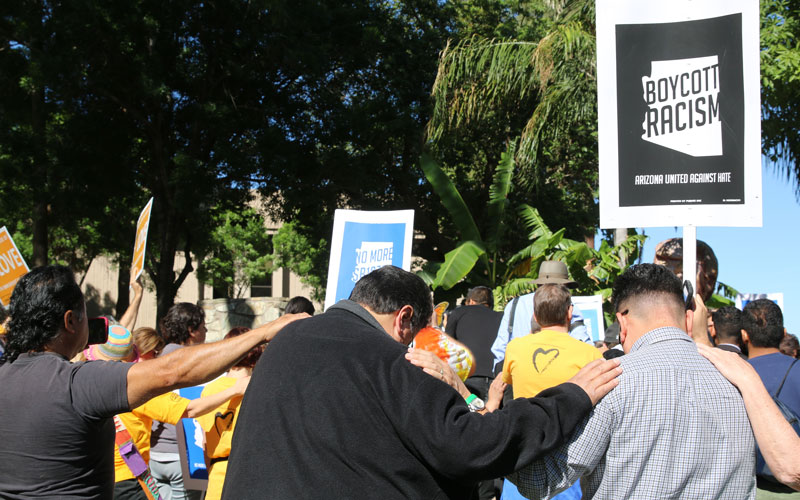 Protesters pray before a rally at the Arizona State Capitol.(Photo by Gabrielle Abbott/Cronkite News)

Chanting in both English and Spanish, the protesters on Wednesday prayed and called on Gov. Doug Ducey to veto bills that promote language of hatred.

“Arizona does not need to be known as the most racist state in the country,” said Rev. Carol Rose of Shalom Mennonite Fellowship in Tucson. “We can do better than this. ”

Rose and others came to the rally to show the governor that a slew of bills similar to Senate Bill 1070-type discriminatory legislation is not acceptable. But the message quickly grew in scope as protesters from the refugee community, the lesbian, gay, bisexual and transgender community, religious groups and angry voters joined to advocate their causes. Some waved signs and dressed in religious attire depicting the Virgin Mary.

Bart Smith, a pastor at St. Mark’s Presbyterian Church in Tucson, said fighting hate is a crucial part of his religion.

“I don’t think Jesus was kidding when he said love your neighbor,” Smith said. “He didn’t put any qualifiers on that, so I’m here to love my immigrant neighbor.”

Most protesters echoed the need for respect and rights for immigrants — a message they connected to voting given the Arizona presidential preference election a day before the rally.

Jose Barboza, a 24-year-old native of Guadalajara, Mexico, said he came to the rally to support the organizations “because it affects the minorities.” Like others, Barboza is an undocumented immigrant. Though he is unable to vote, Barboza said he was involved in the process Tuesday, handing out water and talking to the voters.

“I wanted to encourage others to vote,” Barboza said. “I wanted them to know that their voice counted.”

Barboza said he doesn’t side with a particular candidate and didn’t encourage others to take a side.

Barboza said the experience at the polls yesterday was “hard to see” because so many people had to deal with long lines and waiting times. That was the reason Phoenix resident Rich Sitongia said he attended the rally.

“The lines were outstandingly gross yesterday. It was an outright disgrace to be an American and to see this in our country,” Sitongia said.

“Freedom to vote is everybody’s right, and for that to be taken away just because long lines and the discrepancy from registering Independent to Democrat and saying you’re not even registered was a bunch of crap,” Sitongia said. He said he voted for Bernie Sanders on Tuesday.

Many attendees said they came to the rally on behalf of family members. As protesters pounded on drums to the beat of the chants, 22-year-old Montell Hernandez jumped into the middle of the circle and began to break-dance. Hernandez attended the rally saying it was important “to fight for our people and fight for our rights.”

“I am fighting for the rights of my dad. He’s an immigrant,” said Hernandez, whose family is from Sonora.

Above the protesters floated a large paper Trump head, held by Jorge Mendez, a United States citizen who is from Argentina. Protesters bashed Trump’s ideas, calling his message hateful.

Hector Valdez, pushing his 15-month-old son in a stroller, said “the state of affairs” was his reason for participating in the rally.

“There really needs to be a voice that counters the rhetoric that’s been so hateful, so anti-immigrant, anti-minority,” said Valdez, who voted for Sanders.

Jacinta Gonzalez, whose views were highlighted over the weekend after she locked herself to a car in protest of Trump’s rally on Saturday, attended Wednesday’s protest. Gonzalez said she did not vote in the primary and attended the rally for the same reason she protested Trump.