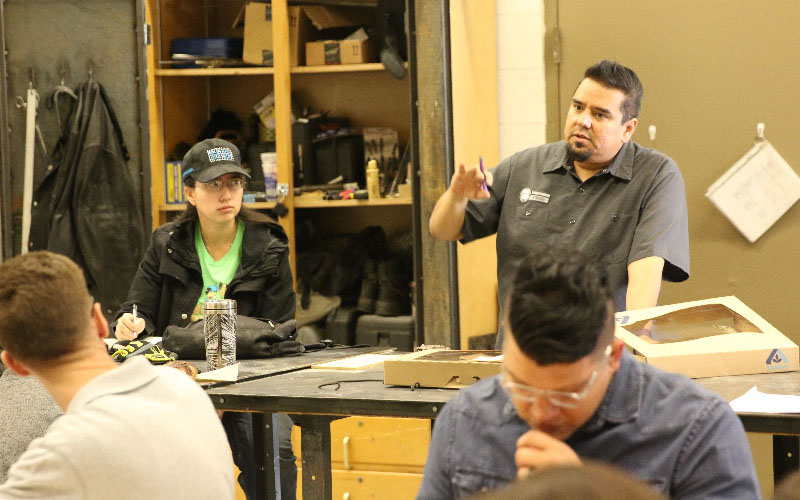 Angel Cabrales instructs some of his beginning sculpture students at University of Texas El Paso. (Photo by Chloe Nordquist/Cronkite News) 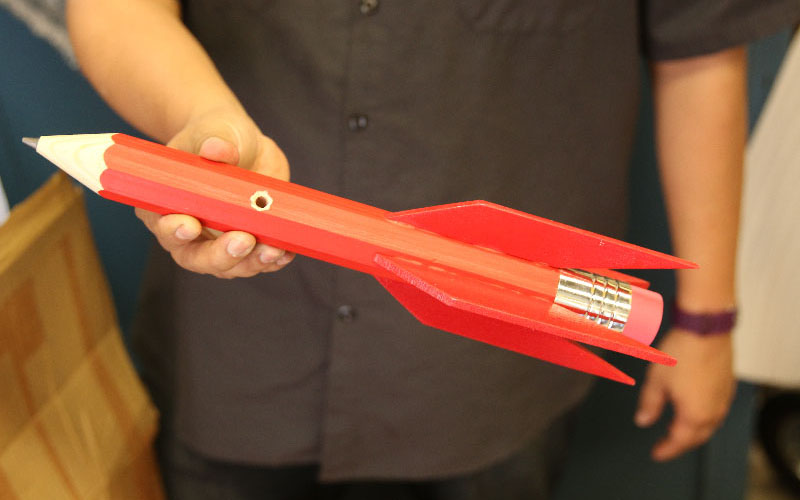 Pencils made in to missiles are part of Angel Cabrales’ piece titled “M.A.D.D”. The piece depicts a red wagon made in to a tank. (Photo by Chloe Nordquist/Cronkite News) 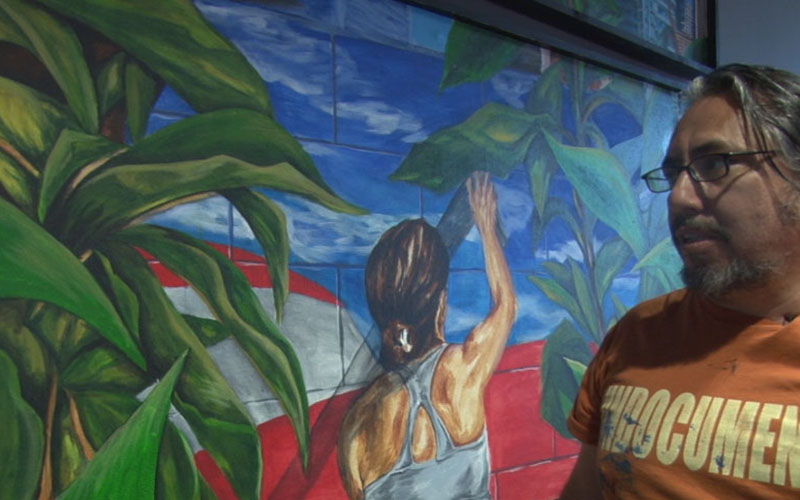 Hugo Medina explains one of his pieces hanging in a conference room at Torres Communications in Phoenix. (Photo by Chloe Nordquist/Cronkite News) 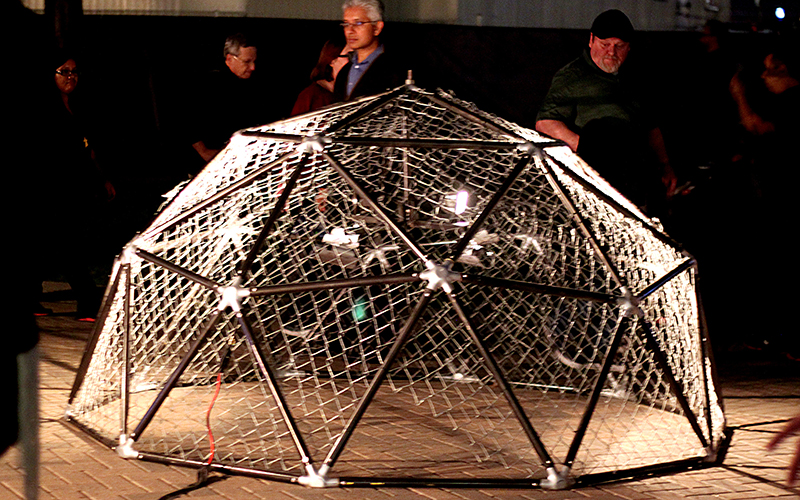 Hugo Medina, a Phoenix-based artist, draws on his experiences as an immigrant from Bolivia.

“Art is just a visual form of storytelling and communicating with an audience,” Medina said. “As an artist we have the responsibility to tell the story that we experienced.”

Medina immigrated to New York from La Paz, Bolivia as a child. He lived as an undocumented immigrant until he was a senior in high school and qualified for amnesty under Ronald Reagan’s Immigration Reform and Control Act of 1986.

His paintings show the struggles of immigrants like himself in the United States. “As an artist I don’t believe in forcing my politics on people but at the same time I can’t help but to comment and create art about what’s affecting me,” he said.

Medina’s paintings and murals are exhibited throughout Arizona — from downtown Phoenix to Surprise.
“Murals is our first form of communication that we as human beings developed,” Medina said.

He began “Murals for Social Change,” a series of murals that offer a social commentary and promote change. He completed a mural earlier this month at Mesa Community College inspired by a debate on giving a sacred Native American holy site in the state to a foreign mining company.

Medina is asking the City of Tucson for permission to paint a mural about the Dreamers and the American Dream. The mural would show him graduating from college with the word ‘dream’ at the bottom.

“It’s to showcase that we should dream and we should fight for it,” he said.

“My goal is to create dialogue. Not necessarily to tell a person what to think, but to think,” he said. “To get opposing views, to look at the artwork and to meet together and talk together without killing each other.”

He grew up in El Paso where he would cross into neighboring Ciudad Juarez for everything from going to the market to hanging out with friends. He and other border residents stopped going to Mexico when drug violence spiked in 2008. Murders in Ciudad Juarez have since declined sharply.

“Even though it did get bad for a while it’s not the way it’s portrayed now,” he said. “You have people like Donald Trump saying it’s a war zone and it’s not. El Paso is the number one safest city in the nation.”
Cabrales’ experience with that stretch of the border inspired one of his largest sculptures.
“One of the ones I’m most proud of and I’m actually going to be showing it this year in Arizona is titled ‘Juegos Fronteras’,” he said. “It’s a piece on immigration and it’s using a playground as an analogy of border cities.”

The piece is constructed from a full scale metal playground and wrapped in chain link and barbed wire with spotlights.

Cabrales’ hopes this work, among others, will encourage the community to discuss immigration issues.

“Juegos Fronteras” will be shown at The monOrchid art gallery in downtown Phoenix in August.