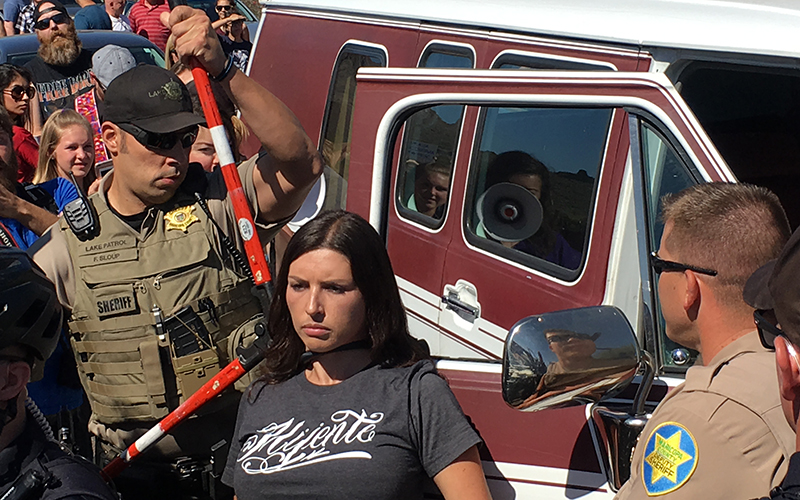 A woman locked herself to a car in protest of a Donald Trump rally. She was freed by police, then arrested. (Photo by Justin Emerson/Cronkite News) 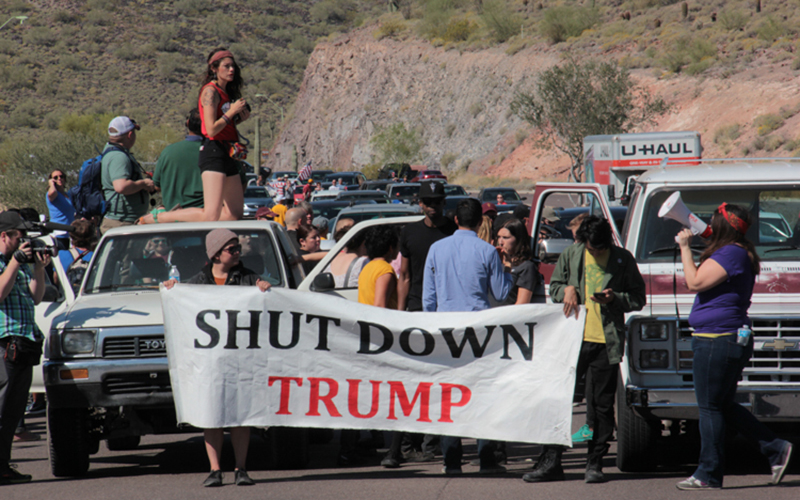 Protesters who shut down Shea Boulevard attempt to keep people from getting to Donald Trump’s rally on Saturday. (Photo by Matthew Tonis/Cronkite News) 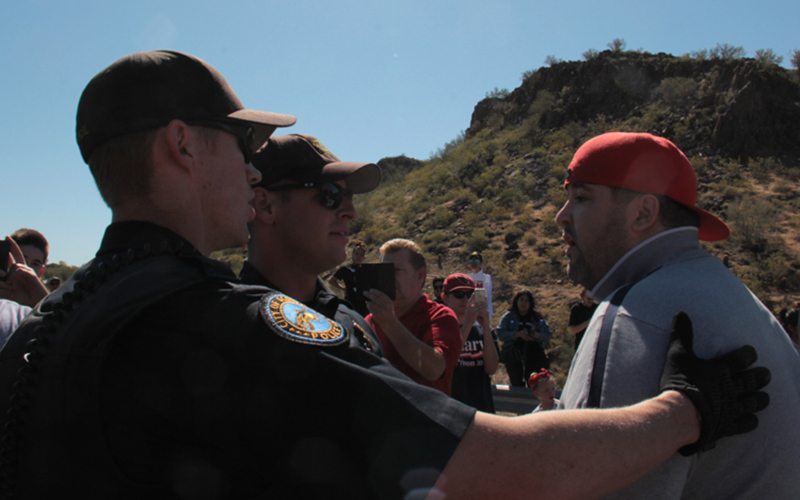 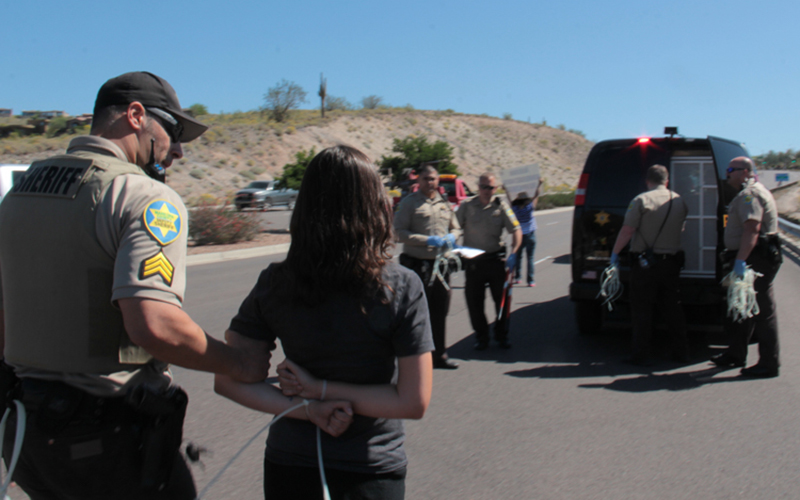 A protester is arrested after chaining herself to a car on Shea Boulevard in Fountain Hills.
(Photo by Matthew Tonis/Cronkite News)

Trump, the GOP frontrunner, held two events Saturday in the Valley. Protesters parked their vehicles in the middle of Shea, backing up traffic for miles. One woman chained herself to a van. Sheriff’s deputies cut her loose and arrested her.

The Puente Human Rights Movement claimed itself as inciters of the protest on their Facebook page, joined by Mijente, a Latino activist group. Carlos Garcia, the executive director of the group, released a statement on Mijente’s website.

“In Arizona we’ve heard Trump’s hate before and we know where it gets us,” Garcia wrote. “Trump’s ugly rhetoric is being turned into policy proposals as we speak that threaten the wholeness of our families and the safety of our communities. All people of conscience have to unite to stop it.”

Protesters remained mostly nonviolent, chanting in both English and Spanish.

The blockade began at approximately 9:30 a.m. and lasted until tow trucks arrived and removed the protesters’ vehicles at approximately 11:15 a.m. In all, three arrests were made and two cars were towed.

Multiple protests broke out throughout the day in Fountain Hills before, during and after Republican presidential candidate Donald Trump’s rally in the town Saturday.

Angry rally-goers – with ages ranging from young children to the elderly – berated anti-Trump protesters with slurs and obscenities as they passed.

One 18-year-old protester named Zane, who declined to give his last name, was harassed by angry counter-protesters both in town and in the line.

“I was kind of mobbed a little bit earlier by, like, everybody,” Zane said. “It’s kind of nice to have a little more people around so that, that kind of discourages mobbing me and just yelling at me, calling me derogatory, unqualified names.”

“We will not be intimidated by these protesters,” Arpaio told Fox News later in the day. “Especially in a town that I run.”

Some citizens felt the same way, insinuating they might take matters into their own hands if things got worse for them personally.

Joshua Feuerstein, a Fountain Hills resident, said the protesters had their rights, but he knew his as well.

“I’m using my Second Amendment right to carry and bear arms,” Feuerstein told Cronkite News. “So right here in the middle of this violent situation, if something starts happening – I ain’t worried.”

Though most of the protesting was done with no physical violence by either side, as Trump was finishing at the podium a group of his fans were fed up with those not on their side.

Each side locked arms and walked toward the other, creating a collision. In the midst of the confrontation, one counter-protester grabbed a sign and ripped it up in front of their opposition.
Trump events have gained notoriety for its protests. A recent event in Chicago was cancelled because of violent outbreaks before the event.