Arizona ready for the unexpected at planned Trump rally Saturday 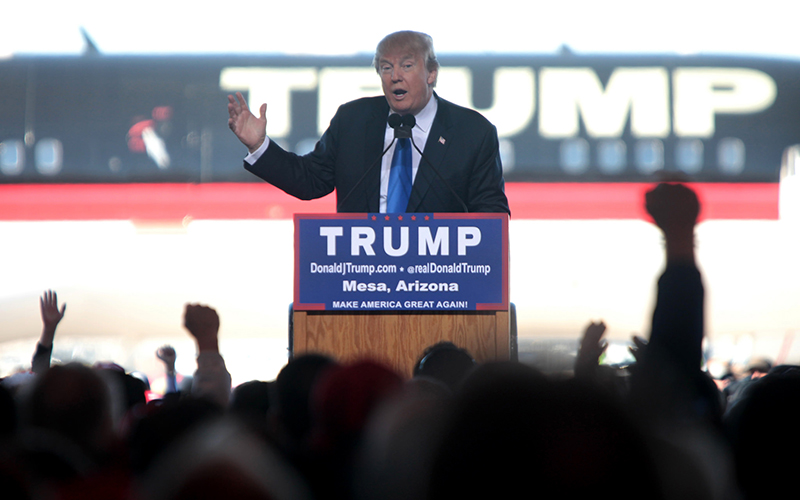 GOP presidential candidate Donald Trump speaks to supporters at Phoenix-Mesa Gateway Airport in Mesa on Dec. 16, 2015. Trump is scheduled to appear in Phoenix on Saturday ahead of the Arizona primary election. (Photo by Gage Skidmore/FlickrCC)

Donald Trump, the leading Republican presidential candidate, is expected to hold a rally in Fountain Hills on Saturday ahead of the Arizona presidential primary next week.

The rally, confirmed Thursday, is expected to be held at Fountain Park on 12925 N. Saguaro Blvd. at 11 a.m., according to Patty Toal with the town of Fountain Hills.

At least three pro-immigrant groups — Puente Human Rights Movement, Living United for Change in Arizona and One Arizona — immediately announced they would be in the area protesting the Trump rally, according to a Puente spokesperson.

The Arizona primary is Tuesday.

This visit falls under dramatic circumstances. Several public clashes during Trump’s scheduled rallies have exposed a nasty side of his campaign environment, the most controversial being his cancelled appearance in Chicago last week.

A day later while Trump spoke in Ohio, a man tried to rush the stage but was surrounded by Secret Service. He was charged with disorderly conduct and inducing panic. Trump, meanwhile, said disruptors have “shut down our First Amendment rights” to assemble.

The tense atmosphere at Trump events is nothing new. Trump himself has encouraged attendees to harm protesters, saying to “knock the crap out of ‘em” and that he’ll “pay for the legal fees,” among other polarizing comments.

But his third visit to Arizona may prove a bigger battleground, heightened by the importance of Tuesday’s closed primary. Latino voters in Arizona largely disagree with Trump’s controversial policy to build a wall along the U.S.-Mexico border and calling Mexicans “criminals” and “rapists.”

A multi-group campaign organized an anti-Trump rally for Saturday soon after news sources announced Trump was set to come. The Facebook event created by Puente has almost 9,000 interested attendees.

“Puente is a nonviolent, nonprofit organization,” said Lucy Sandoval Canela, 22, the communications director for Puente. “As far as the people that are endorsing Trump, we are aware that they are violent, but that’s not our take. We are really there to speak out against these issues, not to be violent.”

“A lot of them have a lot of the agenda that he’s pushing. His points of view are all in those bills,” she said. “We will not have any more Trump projection in Arizona.”

Canela was vague about whether protesters would promise to be peaceful.

“We’re not sure what’s going to happen on Saturday,” she said.

For Trump supporter Caryl Imbriale, 72, of Sun City, Trump’s comments to attack disruptors are just a “matter of speech” that he doesn’t actually mean, but rather gets carried away while speaking.

She lays the fault of the violence on anyone who attacks first. She said security should do a better job of keeping disruptors away, regardless of which candidate’s event it is.

Trump has come to the Valley as a potential candidate before: once to Phoenix in July and again to Mesa in December. Both times have drawn considerable amounts of supporters as well as people protesting his inflammatory statements against undocumented immigrants.

MCSO spokesperson Doug Matteson said Arpaio hasn’t been contacted by the Trump campaign as of Thursday morning, but is ready to meet with the candidate Saturday. (Joe Arpaio’s home is located in Fountain Hills.)

Matteson says the clashes in Chicago were an anomaly in an otherwise normal rally circuit.

“Other than Chicago, there really hasn’t been much violence. Maybe a protester here or there,” he said. “We’re looking for safety if any candidate were to come.”

“I think it’s despicable,” said 27-year-old Raquel Sayer. “I think everybody has the right to protest. I think he’s breeding an environment for hate and negativity, and people are going to stand up and fight back.”

Keith Grayson, a business owner from north Phoenix, said he’s more “middle-of-the-line” and was planning to attend both the Sanders and Trump rallies. He believes things may get violent at the Saturday event due to Trump alienating the large Latino population in the state.

“There’s a lot of tensions between him and the Hispanics,” Grayson said. “He’s going to be antagonizing the whole thing, so I’m there to … watch the freak show.”

Michael Gregg, 22, a history student at Arizona State University, said if tensions at Trump’s appearances don’t subside, people will start showing up to protest in larger numbers, himself included.

“If his rhetoric doesn’t tone down and his supporters get increasingly violent, yeah, I probably would,” he said.

Trump has a 95 percent chance of winning 58 delegates in Arizona next week based on state polls, according to FiveThirtyEight. The GOP race no longer includes Florida Sen. Marco Rubio, who dropped out after losing the primary in his home state.

CORRECTION: Because of incorrect information provided by the Trump campaign, an earlier version of this story had an incorrect time for the event.