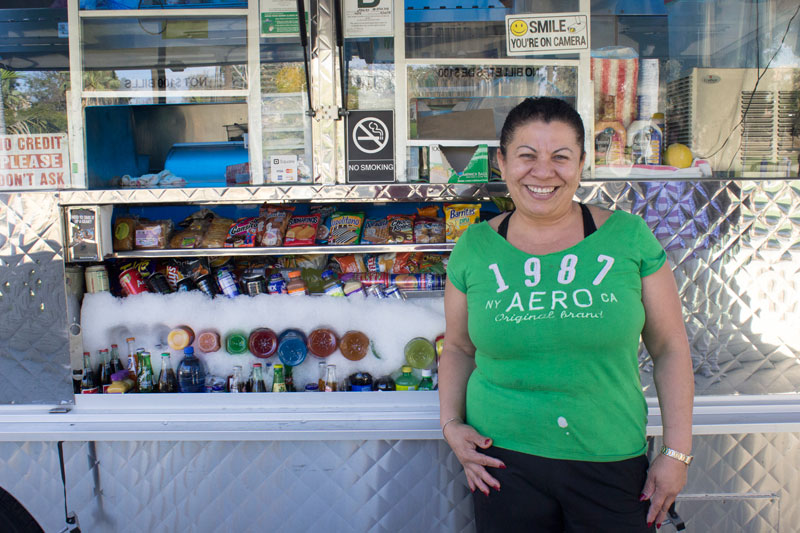 Irma Aracely Gonzales stands outside her food truck at MacArthur Park in Los Angeles. She immigrated to the United States from El Salvador in September 1988.
(Photo by Molly Bilker/Cronkite News) 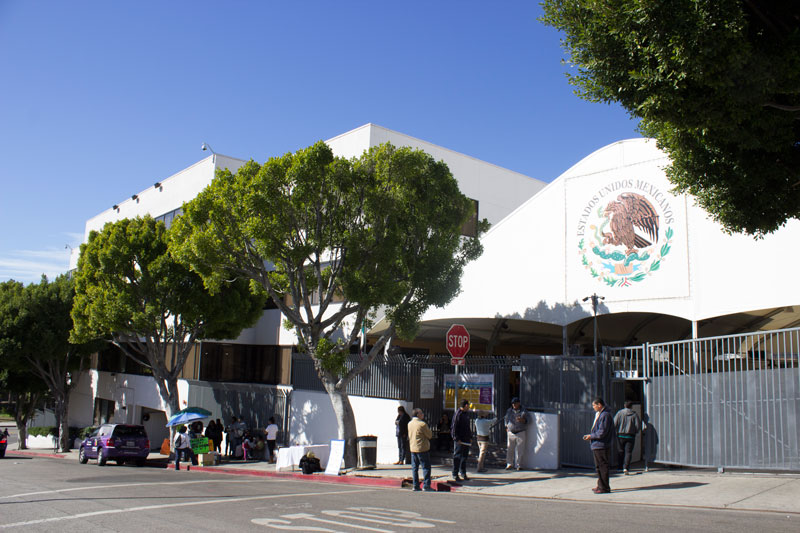 People stand outside the Mexican consulate in Los Angeles. The city has a strong Mexican community for those who choose to immigrate there.
(Photo by Molly Bilker/Cronkite News) 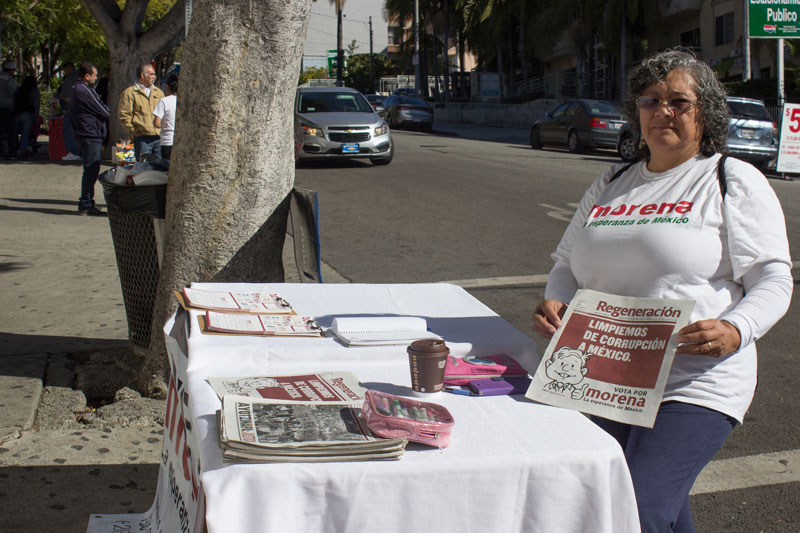 LOS ANGELES — Outside the Mexican consulate in Los Angeles just west of the downtown area, Mexican vendors and workers mill around, selling tamales and newspapers. Across the street is MacArthur Park, known for immigrant families and vendors who pass their time there.

Two decades ago, this bustling community faced pressures that echo Arizona today: rigid, anti-immigrant policies such as Proposition 187, an initiative passed in 1994 under California Gov. Pete Wilson for the state to screen immigrants and prevent those living in the country without documentation from social services such as education and healthcare.

Those policies are widely viewed as a turning point for Los Angeles. The Republican Party in California failed to secure elections, corresponding with an uptick in legal permanent residents becoming citizens between 1994 and 1996, according to Jared Sanchez, a data analyst at the University of Southern California Center for the Study of Immigrant Integration.

Today, only days before the primary election on Tuesday, the situation in Arizona looks very similar, with many legal permanent residents applying for citizenship in anticipation of this year’s elections — indicating the possibility of a similar pro-immigrant shift in the state in coming years. According to the Arizona Hispanic Chamber of Commerce’s 2015 DATOS report, naturalized U.S. citizenship increased in Phoenix by nearly 22 percent between 2010 and 2013.

“Arizona is kind of in a place where LA/California was in the early-mid ‘90s, in terms of SB 1070 in 2010 … this kind of hostility towards immigrants,” Sanchez said. “This moment of hostility and anti-immigrant rhetoric is at its peak now, with the idea of moving (toward more pro-immigrant ideas) later on, as California did.”

The same fight for immigrant rights that Arizona has grappled with in recent years has become part of the history of Los Angeles, said Martha García Alvarado, who acts as national counsel abroad for Mexico City-based political party Morena, the Mexican National Regeneration Movement.

“There are problems, but here we’re facing them,” Alvarado said. “Historically, Los Angeles, California, has been the cradle of many fights.”

As Mexican immigration to the United States has slowed over the last decade, Arizona’s Mexican population, which grew by 135 percent between 1990 and 2000, has had the opportunity to settle and become more established, reflecting the immigrant communities of Los Angeles, said Randy Capps, Migration Policy Institute director of research for U.S. programs.

“What you’re seeing in Arizona is similar to what you’re seeing in LA, it’s just not as far along,” Capps said. “The Mexican immigrant population is becoming more established. The family ties matter more. There are more immigrants that have children born here in the U.S., for instance, and they’re becoming a more settled community.”

The established immigrant community and its historic fight in Los Angeles not only paint a picture of where Phoenix may be headed but also provide lessons for best practices and obstacles faced along the way.

For instance, said Roberto Rodriguez Hernandez, consul general for the Mexican consulate in Phoenix, the Los Angeles of the 1990s was characterized by difficult relations between minority groups and authorities — reminiscent of contention between immigrants in Phoenix and law enforcement figures such as Maricopa County Sheriff Joe Arpaio.

“(Los Angeles) learned from different hard incidents with the minorities and the treatment that the officers used to give the people from certain communities, certain areas, in which there were a lot of crimes committed,” Rodriguez said. “People need to be in touch with the authorities in order to report crimes, report abuses. If they don’t feel confidence, they are not going to report — not just crimes, but different abuses from the officers.”

In Los Angeles, Rodriguez said, the situation was changed by promoting interaction between police departments and the community. Immigrant communities there also found support by connecting with business leaders and organizing immigrant labor, Sanchez said. He pointed to research such as the DATOS report as a way of quantifying the economic impact immigrants make in an area.

“Turning it into an issue about money and productivity and efficiency is kind of a better argument for integration, rather than just human rights or something more abstract like that,” Sanchez said.

As Phoenix grows, the immigrant community will continue to solidify and work to change anti-immigrant policies, said Isabel Ramírez, who immigrated to Phoenix from Ecuador a year and a half ago.

“I do believe the community is establishing, and it wants to hold on to everything, to fight against everything to stay here,” Ramírez said. “The climate is good, the city is progressing. It seems that there can be a very good future here.”

Immigration by the Numbers: Los Angeles and PhoenixInfographic