A worker unloads a stack of produce in a SunFed warehouse in Nogales. The warehouse keeps produce fresh by maintaining different temperatures in each room to keep fruits and vegetables in their ideal climates.
(Photo by Molly Bilker/Cronkite News) 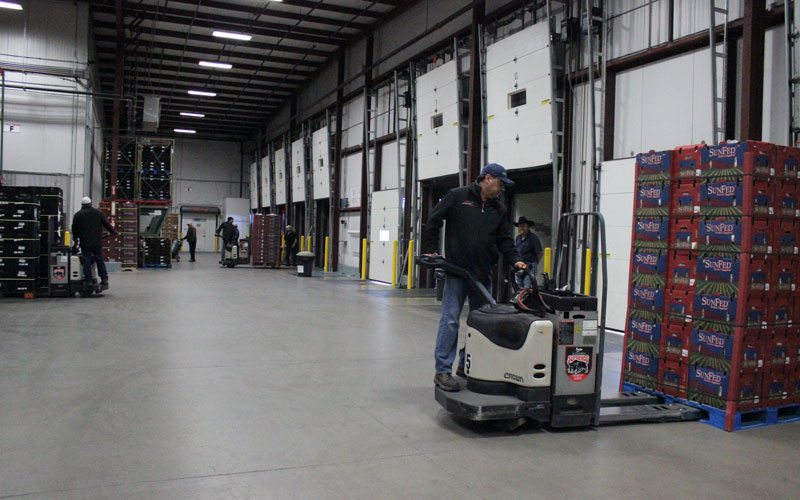 A worker unloads a stack of produce in a SunFed warehouse in Nogales. The warehouse keeps produce fresh by maintaining different temperatures in each room to keep fruits and vegetables in their ideal climates.
(Photo by Molly Bilker/Cronkite News)

NOGALES — Produce imports through Nogales remain on the rise as the produce-growing industry shifts further into Mexico, despite concerns of inadequate customs staffing at the port of entry.

The Mariposa port of entry in Nogales imports the largest volumes of produce to the United States of any port of entry, supplying everything from tomatoes to watermelons in supermarkets throughout the country, including the Phoenix region. The majority of that produce comes through in the winter growing season, which can last from December or January through April, said Nogales U.S. Consul General Christopher Teal and other experts.

“On a given day, during the peak of our produce season — which we are kind of at the peak right now — when you add in the produce and maquila trucks, the most trucks we’ll see cross the border on a given day are 1,700 to 1,800 trucks,” said Lance Jungmeyer, president of the Fresh Produce Association of the Americas. “It’s six or seven times higher than an airplane flies if you stacked all those boxes up in one stack, just for one day.”

The growth, however, is not on parallel with enough customs agents on the ground, and that has some produce importers worried. In a county where produce imports account for a quarter of total wages and a third of total economic impact according to a 2013 University of Arizona report, a dearth of customs agents raises concerns for quite how successful the industry can be in the Nogales area, said critics including
Matt Mandel, vice president of operations for SunFed Produce.

Mandel expressed frustration with a federal focus on increasing border patrol staffing while customs staffing suffers. In the 2014-2015 season, the top 10 produce imports weighed in at 5.3 billion pounds, up 2 percent from 5.2 billion in the 2013-2014 growing season. While the security issues matter, Mandel said, trade often gets overlooked.

“Fighting crime in the desert is more important than trade,” he said. “Legitimate trade through our ports of entry.”

Nogales Port Authority chairman Guillermo Valencia said Nogales’ competitiveness against other ports of entry can be damaged by the perception importers have that low staffing keeps the port from operating efficiently.

“It really hurts us that other people use that against us because maybe we’re not fully staffed,” Valencia said.

While peak season may see up to 1,800 trucks, the Mariposa port of entry, which was expanded in 2014, can accommodate up to 4,000, Jungmeyer said. While allotments have been made on a federal level for 180 new customs agents at both the commercial and pedestrian Nogales ports, those jobs aren’t being filled. In fact, rather than gaining inspectors, the Nogales ports are losing them, Valencia said.

The problem arises from the fact that people aren’t applying for customs jobs on a federal level. The application procedure is more stringent than other federal agencies’, and those who do pass are more likely to select a more popular destination to live than Nogales, Valencia said.

Teresa Small, chief public affairs liaison for the Customs and Border Protection Tucson field office, said in an email that CBP is “actively recruiting applicants of the highest integrity and moral character to become members of the CBP workforce.”

Despite staffing concerns, the Mariposa port still has fast processing times, with 45 minutes to two hours as opposed to the nine-hour or overnight wait times trucks dealt with before the expansion. That means for now, importers don’t have to worry about compromising the freshness of their produce.

While import volumes have been low so far this season because of fall storms including Hurricane Patricia in October, experts such as Jungmeyer say they are confident the market will bounce back in the coming months. They expect produce imports will only continue to grow as an industry due to more growers based in Mexico as U.S. growing states such as California face higher prices and water concerns.

While many hope complete staffing at the Mariposa port could bolster that growing industry, some, such as Scott Vandervoet of import company Vandervoet and Associates, are concerned about too much focus on produce imports meaning lack of diversification in the Nogales economy.

“I’m a resident of Nogales, I’m an investor in Nogales,” Vandervoet said. “Anybody who invests knows the value of diversification. … We really do need to do a little bit better job of diversifying opportunity. That being said, cross-border trade, I think, will continue to grow, and opportunities within that sector will grow. But that’s only one sector.”