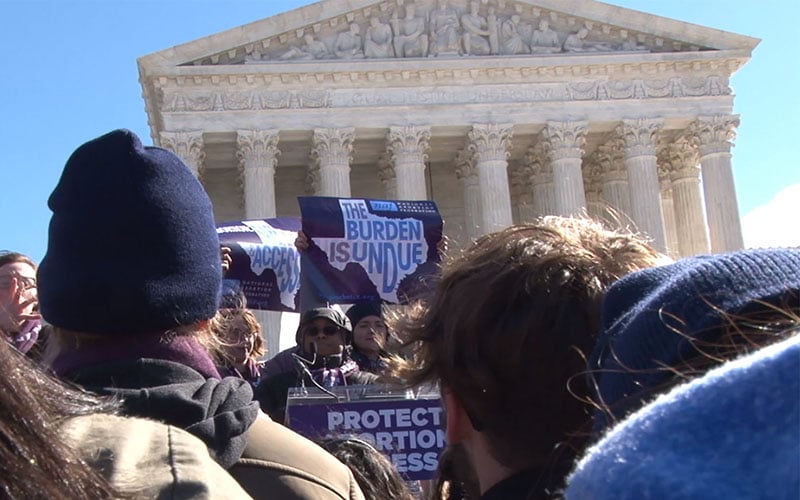 Pro-choice protesters rallied outside the Supreme Court as it heard arguments over a Texas law that would apply strict regulations on abortion clinics, shuttering up to three-fourths of the clinics in the state. (Photo by Katie Bieri/Cronkite News) 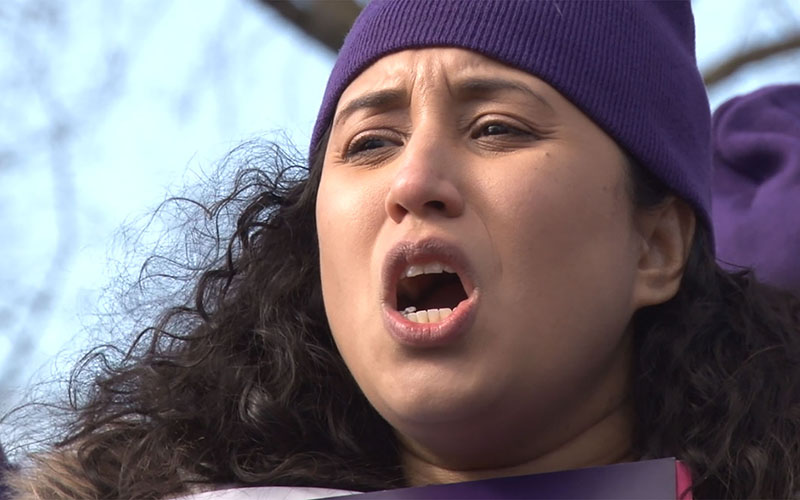 Opponents of the Texas abortion clinic law chanted “stop the sham” in reference to the law, which supporters say aims to protect women’s health but critics say is meant to limit abortion access. (Photo by Katie Bieri/Cronkite News) 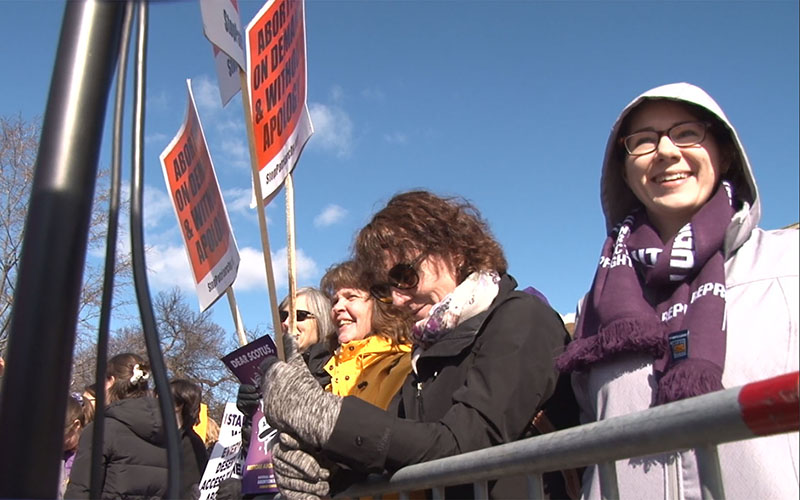 Arguments on the Texas abortion clinic law marked the first significant abortion case to reach the Supreme Court in almost a decade, and the first major case before the court since the death last month of Justice Antonin Scalia. (Photo by Katie Bieri/Cronkite News)

WASHINGTON – Arizonans were among the thousands of pro-life and pro-choice supporters who rallied outside the Supreme Court on Wednesday, as it took up one of the most-divisive issues for the court and the country.

The justices were considering a challenge to a Texas law that imposes strict medical regulations on abortion clinics, requiring that clinics meet standards of an ambulatory surgical center and that clinic doctors have privileges at a hospital no more than 30 miles away.

Supporters say the law is meant to protect women. But critics – including those chanting “Stop the sham!” in front of the Supreme Court Wednesday – say the law would end up closing three-quarters of the abortion clinics in the state. They see the law as little more than a thinly disguised attempt to restrict abortion access.

“I feel like it’s very important to protect these rights, so it upsets me. It deeply upsets me,” said Karl Pederson, a Scottsdale native who was at the rally.

“These rights have been guaranteed by the Supreme Court as a federal right to all women everywhere in the United States, and the fact that people are trying to limit that deeply upsets me,” he said.

Pederson, a political science freshman at George Washington University, was in the midst of a mostly pro-choice crowd, many dressed in purple and waving pro-choice signs.

But placards with pictures of fetuses stuck out in various spots as small pockets of pro-life protesters held their own outside the court.

Virginia resident Justine Worden criticized the claims of pro-choice protesters that they speak for women.

“To tell women that they need abortion to be free or to be powerful or to be equal is wrong and misogynistic,” said Worden.

She had her arms linked with a small number of other pro-life supporters who were squared off against a similarly linked group of pro-choice protesters.

Texas officials argued in court documents that the state’s interest in protecting the health of women and the safety of medical facilities like abortion clinics outweighs any resulting limits on a woman’s ability to obtain an abortion.

That argument carried little weight with Miriam Yeung, executive director of the National Asian Pacific American Women’s Forum, which she said has worked extensively in Arizona.

“The so-called prenatal non-discrimination laws that are being passed in Arizona and other states are using lies about our country to try to make abortion access difficult,” said Yeung at Wednesday’s rally.

Phoenix native Risa Isard confessed that she was not all that familiar with the case, but she believes strongly in abortion rights.

“I think that it’s really important that Arizona women, and all women in this country, have access to good education and options and abortion, if that’s what they choose,” Isard said.

With the death of Scalia, one of the most conservative voices on the court, the justices are split evenly between four who tend to be liberal and four who tend to be conservative. Should the court split on the Texas case, the circuit court ruling that allowed most of the Texas law to take effect would stand – although the high court could reconsider the case once a replacement for Scalia is seated.

The court is likely to issue a decision before leaving on its traditional summer recess in July.