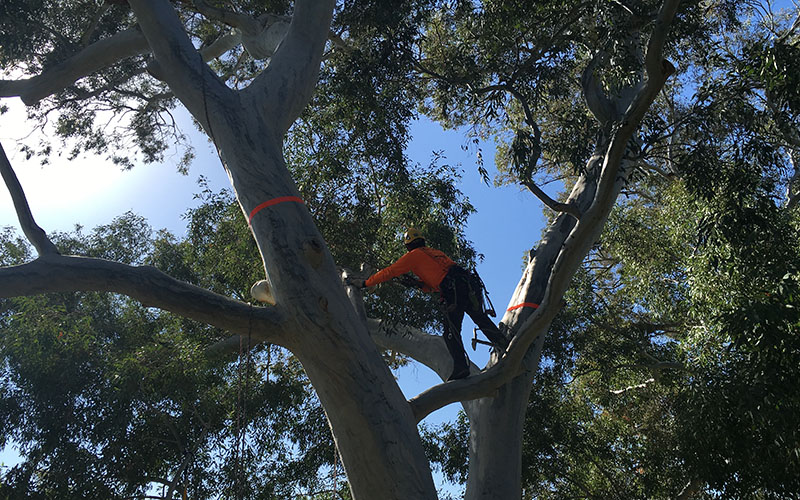 SUPERIOR — The state’s top tree climbers know that most people probably have a few misconceptions about their sport.

“They’re going to think we’re weird or we’re tree huggers or something like that but no, we’re athletes,” Jon Bora, owner of All-American Arborists, said.

Bora was one of several tree trimmers and arborists that made the trek to Boyce Thompson Arboretum in the Tonto National Forest Saturday for the Arizona Community Tree Council’s annual tree climbing championship. The contestants tested their skills in a number of different challenges in the morning that replicated what they would do in their day jobs as tree trimmers — without the chainsaws.

“We’re not cutting or doing any harm to the trees,” Jesse Huffman, owner of Arborvision Tree Service, said. “It’s non-invasive tree climbing to mimic what we do on the job everyday.”

Three arborists advanced to the master’s challenge, the ultimate competition that combined elements from all the morning’s activities.

Andy Young, who owns a tree service in Mesa called The Tree Amigos, dominated the competition, winning his second straight state title. He chalked it up to his early start in the sport.

“From a young age, I was climbing door jams, climbing the refrigerator,” Young said. “I’d climb anything I could, not knowing that it might be my occupation when I got older.”

All three of the finalists said the competition was mostly about refining their skills in a competitive environment, with the end goal of doing their day jobs better and more safely.

“Coming out here and learning this and doing this and practicing for it keeps me adept at my job and safe every day,” Huffman said. “That’s the main reason we come out here.”

Young advanced to the Western Chapter Tree Climbing Championship, which is held in Santa Barbara, California in late March.