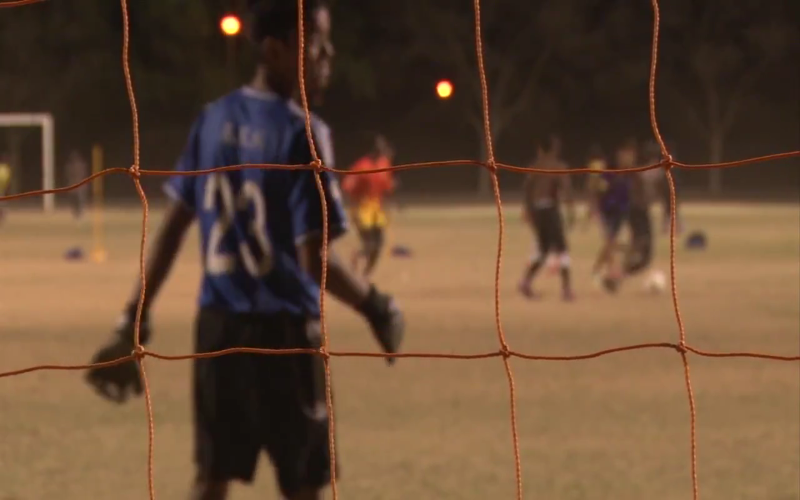 Feeling isolated, many refugees find solace in sports like soccer, a global sport played in many countries. (Photo by Anthony Marroquin/Cronkite News)

“The feeling of playing soccer is like the world to me,” Edmond, 15, said. “When I’m playing soccer, I just feel happier than ever.”

For Edmond’s soccer was the one constant in his troubled world. His parents are refugees who fled the Congo over 15 years ago, after his grandparents were killed. They feared they would be next.

A little over two years ago, Edmond’s family gained refugee status in the U.S. and moved to Arizona.

For a while, Edmond felt lost so he would go out to the park to play the game of his childhood back in Tanzania. And he finally started to feel more at home.

“I’m happy because the players that I met here, started talking to me, and [I started] making friends,” Edmond said.

Edmond’s story is not alone. In 2015 the United States took in 69,993 refugees from 70 different countries, across four continents, according to the U.S. Department of State.

When they arrive in the U.S., most have little to remind them of their home countries. Very few speak English and they have to adapt to a new culture.

“It was difficult for me because I really don’t know that much English,” Lay Htoo, a 15-year-old refugee from Thailand, said.

Feeling isolated, many refugees find solace in sports like soccer, a global sport played in many countries.

“I feel closer to them because like I was feeling comfortable playing soccer with them,” Htoo said. “So, I joined them. I feel happy.”

Several organizations have begun programs to encourage the participation of refugees in sports.

In 2013, the Iraqi American Society started the One World Refugee youth Soccer Tournament. The tournament has drawn over 200 people and teams from eight different countries.

The tournament was cancelled this year because of funding issues, according to the Iraqi American Society, but the non-profit organization is hopes to start it back up next year.

The AC Milan soccer club in Phoenix helps refugees by providing players with free admission into the club, and rides to and from work.

That’s where Akili Edmond now plays soccer. He said it’s thanks to the sport and his coaches that he finally feels like he belongs.

“I would like to thank my coaches because they’ve done a lot for me,” Edmond said. “I’m just so grateful of that.”