Cinematographer Dylan Kearney (right) and his camera crew ready a dolly shot on location in Scottsdale for a scene from the film “There and Back.” (Photo courtesy of ️AFV-LLC.) 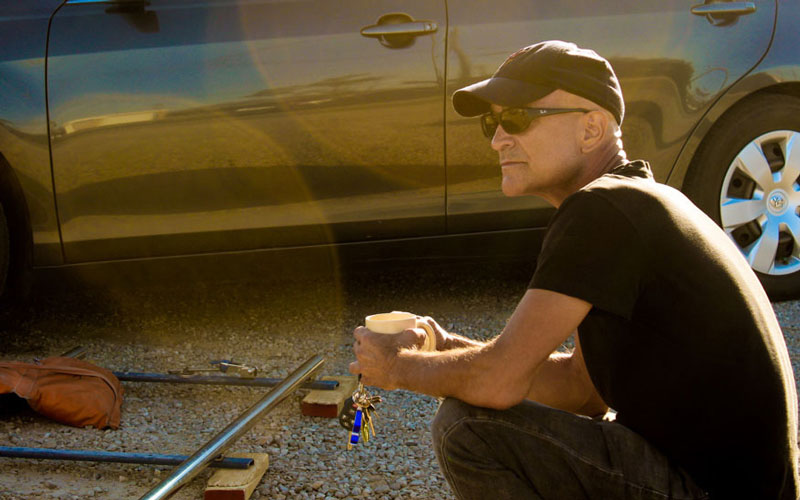 Director and producer Marcus De Leon waits at the camera dolly tracks in between shots on location in Salome during the making film “There and Back.” (Photo courtesy of AFV-LLC.) 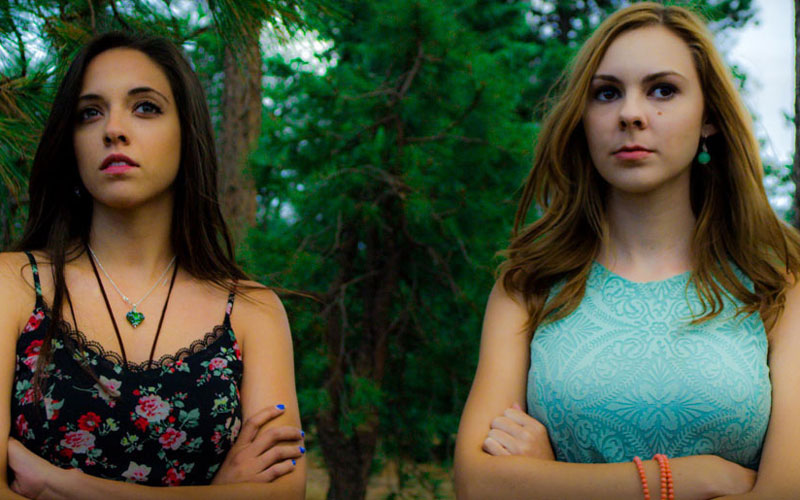 Actors Liana Vittoi (left) and Nicole Gallagher in a scene from the movie “There and Back” filmed near Forsest Lakes. Both actors graduated from Arizona State University. (Photo courtesy of AFV-LLC.) 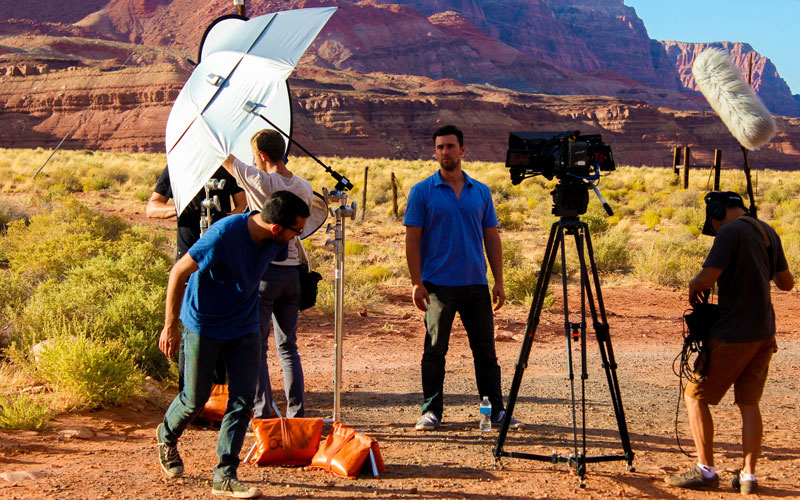 On location near Lees Ferry, actor Clayton McInerney waits as the camera and audio crew of “There and Back” ready a shot. Mcinerney graduated from the University of Arizona.  (Photo courtesy of️ AFV-LLC.) 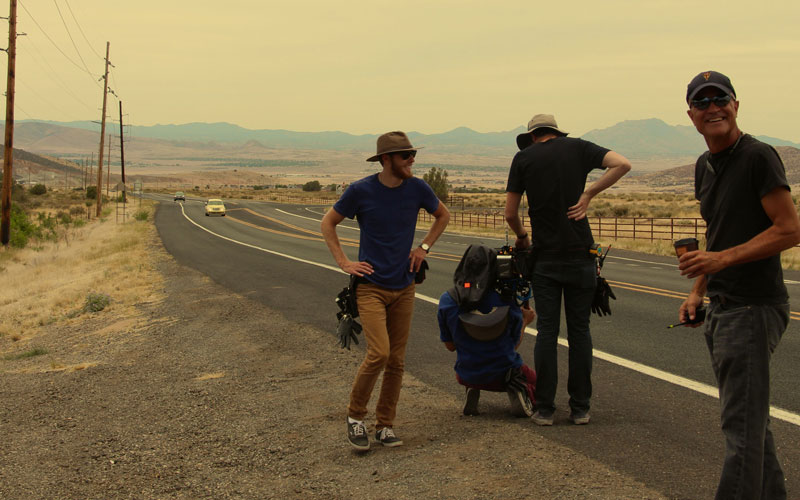 “There and Back” director and producer Marcus De Leon and his camera crew prepare a road shot near Jerome. The camera crew pictured graduated from the University of Arizona. (Photo courtesy of AFV-LLC.)

When he got the chance to present his movie idea to potential funders in Tucson, he ran into some technical mishaps. He thought it was over.

But De Leon didn’t give up.

De Leon and his cast will discuss the funding challenges as part of PHX Startup Week. They’re the first movie team featured at the week-long event that features Arizona’s entrepreneurs.

The team from the movie – filmed entirely in Arizona with an all Arizona cast – will speak at 9:15 a.m. on Feb. 25 at the Civic Center Library in Scottsdale.

“I knew I would have to raise all of my finances in Arizona. Hollywood would never finance a movie with my three lead actors being recent grads of U of A and ASU,” De Leon said. “They would never finance my movie if they knew I had a 21-year-old first time cinematographer who was still a student when he made the two-month movie.”

For two years, De Leon approached Arizona investors about his movie concept, and was given a resounding “no.”

After countless denials, De Leon found an opportunity in the Desert Angels, a nonprofit group of investors in Tucson.

The Desert Angels held a panel similar to the format on TV show “Shark Tank,” in which entrepreneurs get 10 minutes to present their ideas and 10 minutes to answer questions from judges. De Leon submitted his information and was surprised to find they had chosen him to present.

Desert Angels had only invested in health and technology related startups previously, so De Leon said he was uncertain about his chances.

During his presentation, De Leon said that all that could have gone wrong, did. The projector did not work and neither did the audio, despite testing them the previous day.

“The walk to breakfast afterwards felt to me like a funeral march,” De Leon said. “I thought ‘what a disaster, nothing will come of this, I’m out of possibilities after trying for so long.’ Just an hour later, some of the Angels who were in the screening room started calling and asking for a meeting.”

De Leon’s film caught the interest of Robert Hungate, a retired Hewlett Packard executive, who became the lead investor in “There and Back.” Timothy Kalthoff, a Texas Instruments executive, also became involved.

“We had a few more presentations for the movie that went very badly,” De Leon said.

It took De Leon nine months to receive 100 percent of the funding he needed to create his full-length film. He declined to disclose the amount he obtained.

“Four days later, we began filming this movie, and we did not stop for the next two months. We traveled 17,000 miles around Arizona,” De Leon said.

“There and Back,” is a story about a woman who travels home from New York to Arizona to find that a sculpture made by her grandfather is gone, and she must take a road trip through the state with her family to reclaim it.

Using nine vehicles to travel to cities like Sedona, Prescott and Scottsdale, De Leon said they had barely enough funding to complete the filming after paying for gas.

“One of my stipulations with investors was everyone gets paid,” De Leon said. “A filmmaker can always find actors to work for free, but I wanted to make a professional environment. Everyone got paid.”

One of the lead actresses, Liana Vittoi, a recent graduate of Arizona State University, said this was her biggest job.

“It was a completely different experience than anything I’ve ever done,” Vittoi said. “We were working 12 hours a day, we were completely immersed in this project, which was an amazing experience.”

De Leon said he would film from 4 in the morning until 4 in the afternoon to capture the perfect lighting for his “road trip” movie scenes.

De Leon said he wanted to use young actors and crew to utilize fresh talent and help the newly graduated students get a full-length film under their belt, which will open the door to other jobs.

While the movie will not be shown to the public until this fall, De Leon, Vittoi and the other cast members will share their views on the filmmaking process at PHX Startup Week.

“When I was cast, they hadn’t got all of the funding yet. We were still unsure about everything. I was there through all of that. I saw it all happen, I saw Marcus’ driving passion for this. He did not give up, and he kept pushing when people said no,” Vittoi said. “It was great because he’s the writer and the director. He had an eye for what he wanted, and he was able to capture it.”

Phoenix film industry by the numbersInfographic