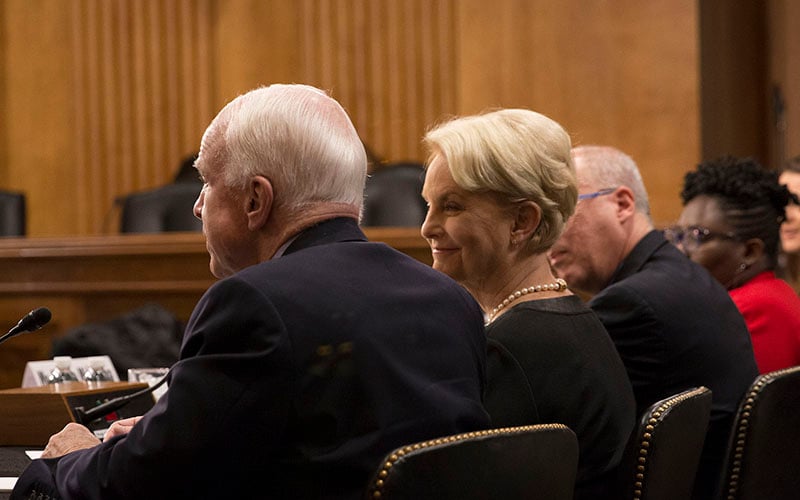 Cindy McCain and her husband, Sen. John McCain, R-Arizona, testify before the Senate Foreign Relations Committee on human trafficking. Cindy McCain said the U.S. should be a leader in the fight against trafficking. (Photo by Madison Alder/Cronkite News) 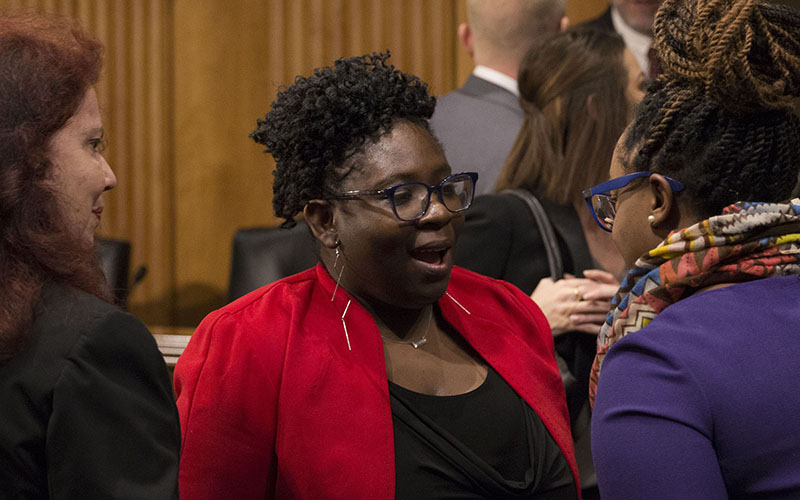 Evelyn Chumbow testified to the Senate Foreign Relations Committee about being taken from Cameroon as a child on the promise of an education in the U.S., where she was instead forced into slavery as a domestic. (Photo by Madison Alder/Cronkite News) 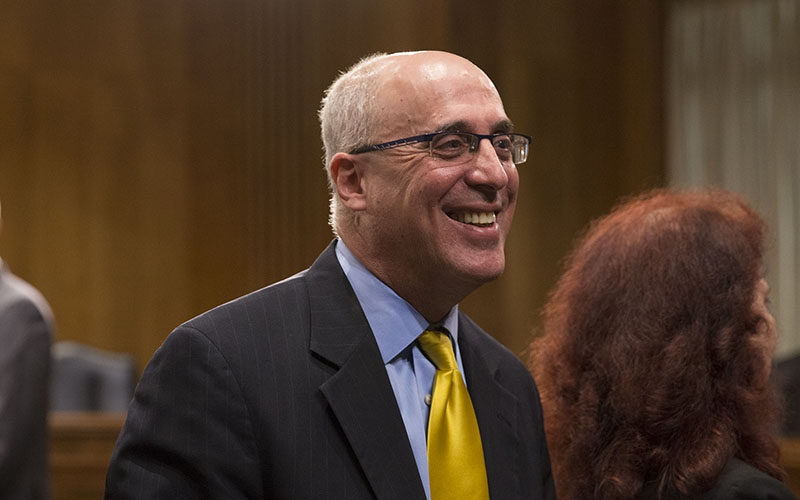 Maurice Middleberg, executive director of Free the Slaves, said much needs to be done to stop human trafficking, but he is optimistic that the U.S. will commit itself to this “great moral purpose.” (Photo by Madison Alder/Cronkite News)

WASHINGTON – Cindy McCain told a Senate committee Wednesday that the U.S. should be the leader in the global fight against human trafficking.

“We need to recognize that we have a global problem and it calls for a global solution,” McCain said in testimony to the Senate Foreign Relations Committee, which was considering the issue of “modern slavery.”

McCain, who was joined at the hearing by two trafficking victims and an advocate, described international human trafficking as a “very complicated spider web of activities” that Americans can no longer ignore.

“We tend to talk about the United States separately from the world, but it really isn’t separate from the world,” she said, pointing to the issue of labor trafficking on the Southern border.

Evelyn Chumbow, one of the witnesses at the hearing, is all too familiar with labor trafficking.

The Cameroon native was taken from her family at age 10 by a man who convinced her parents that she would get a better education in the United States. Instead, she was forced to work as a slave in the Maryland suburbs of Washington, doing manual labor for her captor and being verbally and physically abused.

“I want to ask you to dedicate your effort toward any modern-day slavery,” she said in her testimony to the committee Wednesday. “That means addressing sex trafficking and labor trafficking and not separating the issue.”

She referenced a House bill that addresses only sex trafficking, not labor trafficking.

But witnesses said that in addition to legislation, education is needed to address the problem of modern-day slavery.

That sentiment was shared by a witness identified only as “Leah,” a trafficking victim who is now an advocate for A21, an organization working against modern slavery. Leah testified that she was enslaved for seven years, listing Scottsdale as one of the places she was trafficked to, among other locations.

McCain the state of Arizona “has been very active on this … our Legislature has passed some very strong pieces of legislation in not only dealing with the victims of trafficking but dealing with the traffickers and the ‘customer.'”

She is also co-chair of the McCain Institute’s Human Trafficking Advisory Council and said the institute has a task force in Arizona that educates people about issues of modern slavery, an effort she would like to see implemented in schools in the state.

“Education awareness, in my opinion, is the only way we will be able to make a difference on this issue within the borders of the United States,” McCain said.

Her husband, Sen. John McCain, R-Arizona, was on hand to introduce his wife and lend support to her initiative.

He tied Arizona to the global issue of trafficking by pointing to the story of Kayla Mueller, a Prescott woman who was volunteering at a hospital in Syria when she was captured by ISIS and died last year. She “epitomizes young men and women in the world who need our help in protection,” he said.

Cindy McCain said the U.S. has to stop “boosting” countries that aren’t serious about anti-trafficking efforts, pointing to the State Department’s annual Trafficking in Persons Report as a possible tool in that fight.

Maurice Middleberg, executive director of Free the Slaves, testified that advocates see “the small scale of the global response to trafficking and inconsistent political support as the core obstacles” to solving the problem of modern slavery.

But while there are issues in how we address slavery, Middleberg said “the message today is a message of hope and optimism? because the U.S. has the potential to make a “radical reduction in slavery” if Congress and the next president act.

“I know that when the United States of America ties itself to great moral purpose and invests tenaciously in that issue, that we always, always see profound change,” Middleberg said.