More than 4,000 wild burros live in western Arizona, which federal officials say is three times the amount the land can support. Now, federal and local officials are talking about ways to rein in the herds. (Photo by Ken Lund/flickr via Creative Commons) 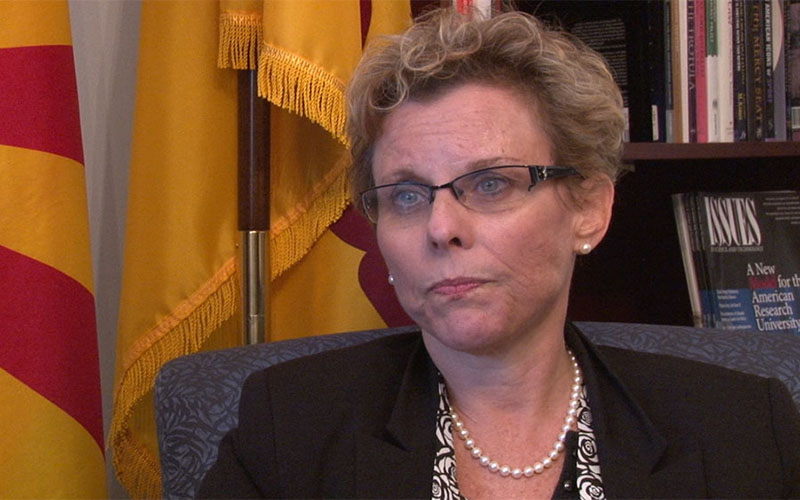 Mohave County Supervisor Hildy Angius, in Washington to discuss the problem of wild burros in her county, said people don’t understand the costs, environmental and financial, of damage caused by the animals. (Photo by Katie Bieri/Cronkite News) 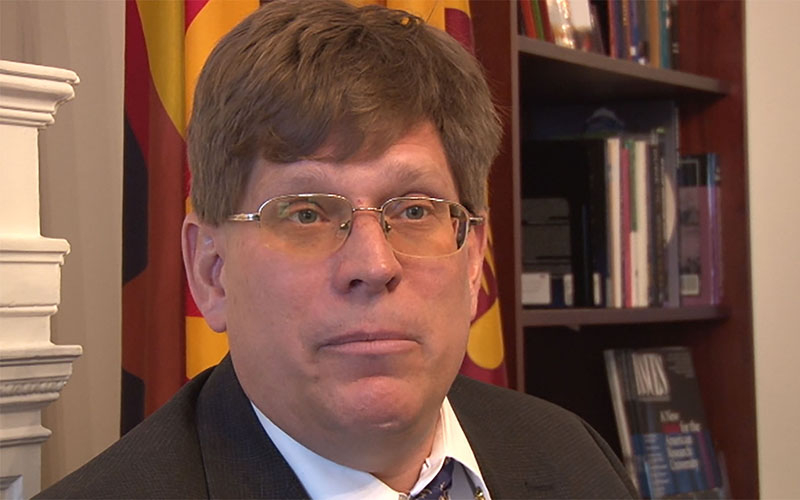 Mohave County Supervisor Steve Moss caused an uproar with a plan to hunt wild burros, a move he admits is “a little nutty.” But it was intentional: He made the statement to draw attention to the wild burro problem. (Photo by Katie Bieri)

WASHINGTON – Federal and county officials agreed after face-to-face meetings in Washington this week that “there is a problem” with overpopulation of wild burros in Arizona’s western counties and that something needs to be done.

Mohave County supervisors who attended the meetings called them an important first step toward finding a long-term, humane solution, with options that were discussed ranging from adoption to contraception to, ultimately, culling the herd.

Moss and fellow Supervisor Hildy Angius were joined by supervisors from Yuma and La Paz counties in meetings Tuesday with officials from the Bureau of Land Management and the Arizona Department of Game and Fish, according to Sen. John McCain’s office, which hosted the meeting.

Angius said it’s time the governments and citizens come together and “do what’s right” regarding the burros, especially after hearing from a rancher in her district that the animals caused $96,000 in damages last year.

There is an environmental cost, too. Arizona Game and Fish Commission Chairman Kurt Davis, who was at the Tuesday meeting, said wild burros are “ferocious eaters” that destroy the desert’s delicate plant life.

But the animals are protected by the Wild Free-Roaming Horses and Burros Act of 1971, which was passed in an effort to stop inhumane population control efforts – like the unauthorized hunting and selling of the animals.

The BLM estimates that there are now 4,411 wild burros in the state, which is 3.4 times higher than the number the environment can safely sustain.

Moss said he was happy that McCain, an Arizona Republican, was able to “elicit from both the Bureau of Land Management and from Game and Fish that yes, the population numbers are out of whack.”

“Federal, state and local are in agreement that there’s a problem,” he said.

The question now is what to do next.

“I think the focus so far has been on very humane techniques, and I think that’s good and noble and honorable,” Moss said. “I also think it’s not effective. Someday we just have to stand up and be pragmatic.”

Moss sparked controversy recently when he proposed issuing permits to hunt burros, a move he called “a little nutty” and “a little wacky,” but ultimately necessary.

“Since our prior polite resolutions were ignored, I was tasked with being impolitic,” Moss said. “I don’t want to shoot the burros, I don’t think anyone does. But it takes that sort of rhetoric to get attention sometimes.”

Jayson Barangan, a spokesman for BLM in Arizona, was not at the D.C. meetings but said his office will “continue to work with the Game and Fish Department, as well as other partners to create a balanced approach to managing the wild burros.”

He said the agency is working with the Humane Society of the United States to create “new and innovative ways” of population control, including a new birth-control drug that could be tested on the burros once an environmental impact assessment is finished.

Ideas to control the burro herd in the past have included adoption programs, sterilization and removal – all of which would “actually exacerbate the problem,” said an official with the American Wild Horse Preservation Campaign.

“The only thing they (BLM) seem to be focused on is removal, which is not a viable option,” said Deniz Bolbol, the campaign’s program director. “It will only create larger problems down the road.”

She suggested installing roadside fencing to protect both burros and the public, as well as contraception for the animals.

Sandy Bahr, director of the Sierra Club’s Grand Canyon Chapter, also said there are humane ways to control the herd.

“Burros do cause harm, just as most species do when there are large numbers concentrated in an area,” Bahr said in an email. “We encourage a humane effort to manage their numbers that includes adoptions as well as targeted birth control.”

Angius acknowledged that “those from the conservation groups and those from the humane groups, everyone has their own ideas about what we should do, and that’s why we’re here.”

A statement from McCain’s office called on state and federal officials to work together to “more effectively manage the overpopulation of wild burros, which are threatening public safety and damaging property in communities.”

Davis said that while he was pleased with the meetings, which included expanding the BLM’s ability to market burro adoption, more long-term solutions need to be explored.

“What we want to do is get the population down to the management level,” Davis said. “Our short-term plan still allows population growth. The long-term plan needs to figure out how to keep the population under the limit permanently.”