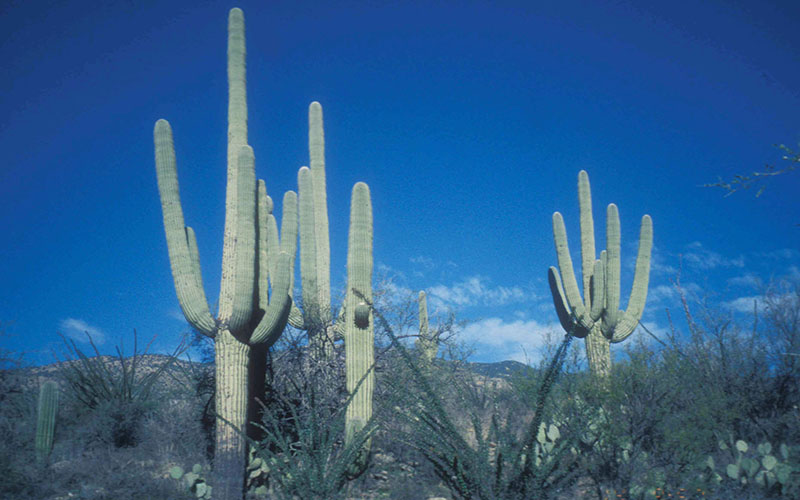 Saguaro National Park near Tucson is one of the parks that would get funding under President Barack Obama’s fiscal 2017 budget, which seeks $900 million to revive the Land and Water Conservation Fund. (Photo by J. Wallner/National Park Service)

WASHINGTON – Both sides agree with the intent of the Land and Water Conservation Fund – to help acquire and improve federal and local park projects – but they disagree on how it should be implemented.

President Barack Obama included $900 million in his fiscal 2017 budget to revive the program, which expired last fall after 51 years of using royalties from offshore oil and gas leases to fund park projects.

Advocates say the program was a vital source of funding for local governments to develop parks – 93 in Phoenix alone – that they may not have been able to acquire otherwise.

But where supporters see a broadly used tool for local governments, critics see another example of federal overreach in the program, which would dedicate $575 million to federal land acquisition in the president’s budget request.

“The federal government owns an awful lot of land, particularly out West, and they don’t need to be buying up a lot more,” said Rep. Paul Gosar, R-Prescott.

Gosar and others say they want to see the money end up in the states’ hands, “because the states are better at conservation than the federal government,” he said.

That is one goal of a plan put forward by Rep. Rob Bishop, R-Utah, and chairman of the House Committee on Natural Resources who let the Land and Water Conservation Fund expire on Sept. 30 without a renewal vote.

Bishop’s proposed alternative, the Protecting America’s Recreation and Conservation Act, would still direct $900 million to park acquisition but would focus on giving states grants and limiting federal land and water acquisition to 3.5 percent of the total fund.

But others say there is no need to do away with the old program and that, without it, communities will struggle to maintain and develop parks. A report by the City Parks Alliance said that more than 98 percent of the nation’s counties have a park project as a result of the conservation fund.

Rep. Raul Grijalva, D-Tucson, introduced a bill in April that would have permanently reauthorized the fund. Despite drawing 200 cosponsors, including 26 Republicans, the bill has yet to get a hearing.

Grijalva praised Obama’s decision to include a reauthorization of the fund in his budget request, saying in a statement that it “will help ensure the great outdoors – parks, rivers and wildlife habitat – are accessible to all Americans today and for years to come.”

Under the president’s budget request, at least $9.6 million of the requested $900 million would go to federal parks in Arizona – but local officials welcomed the funding.

Phoenix Parks and Recreation Deputy Director Judy Weiss said that since the fund was created more than five decades ago, the city has received $10.2 million in grants for local parks, which it matched to create $20.4 million worth of projects. Among the 93 Phoenix park projects funded by the program are South Mountain Park, Echo Canyon Park and, most recently, Long Homestead Park.

“Phoenix – in fact, all of the Valley cities – has made great use of the fund since 1965, and I don’t think that in some cases we would have had the park development we had without that federal money,” Weiss said.

That was echoed by Tucson Mayor Jonathan Rothschild, who said, “Tucson and Arizona have benefited from this fund in the past.”

“President Obama’s proposed budget includes funding in connection with Saguaro National Park,” said Rothschild, a member of the Mayors for Parks Coalition, which supports the fund. “That park, which sits on the east and west sides of Tucson, is an important recreational area for this valley of about a million people.”

The Interior Department said the Saguaro project would protect 137 acres in the park and add employee housing to existing structures on park land, saving $10,000 a year in rental housing and storage space costs.

Nagel said parks are especially important to Arizona because they can slow down and capture storm water, which can prevent flooding and alleviate droughts.

“Parks are an underutilized asset for America’s communities,” she said. “What we’re finding is that parks are vital to the economic, environmental, and social health of our communities.”